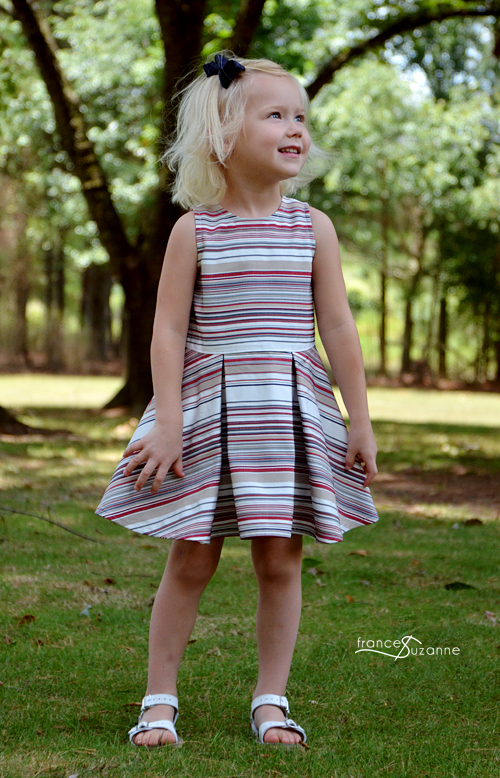 Almost two years ago, we headed to Orlando to take some classes from Liesl Gibson {of Oliver and S} at the annual SAGA conference. The premise of her classes?? 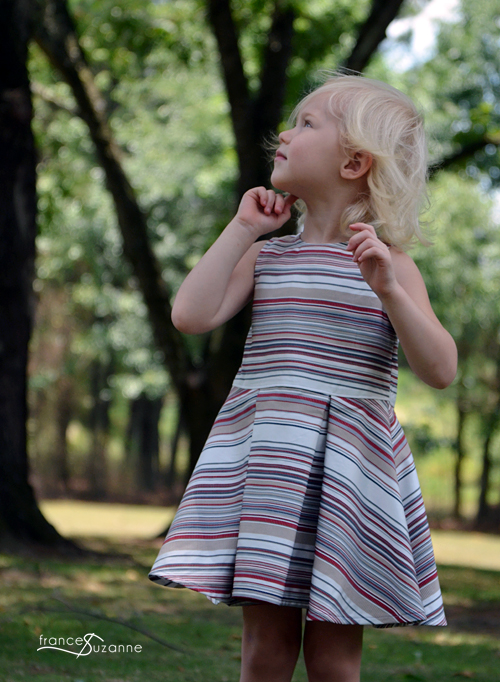 Ohhh, we were pumped after going through the class . . . we decided that we COULD actually do this! And, we were going to do it . . . 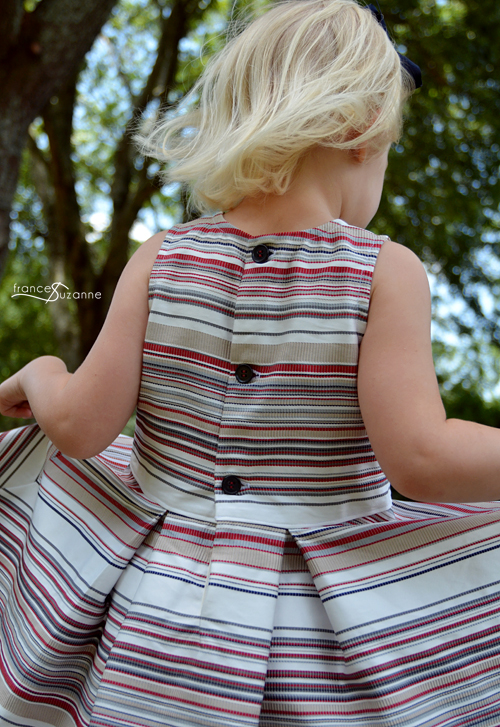 Ummmm, TWO YEARS later we finally got around to it! 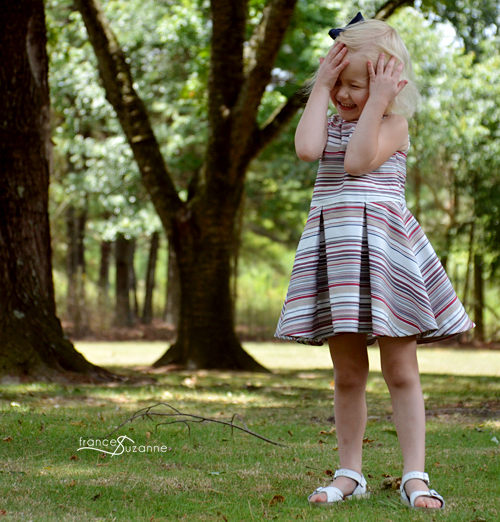 Now, that isn’t to say we haven’t incorporated some of the techniques in other projects. 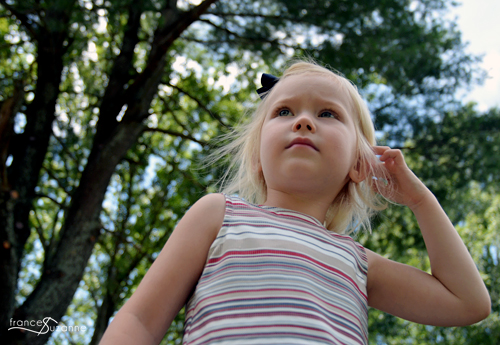 Yet, this dress is the first dress we’ve taken from beginning to end of the process – using Liesl’s pattern pieces as our guide.

We sewed CL a sz 3T of the Oliver + S, Building Block Dress {the latest BOOK release from Oliver + S}. 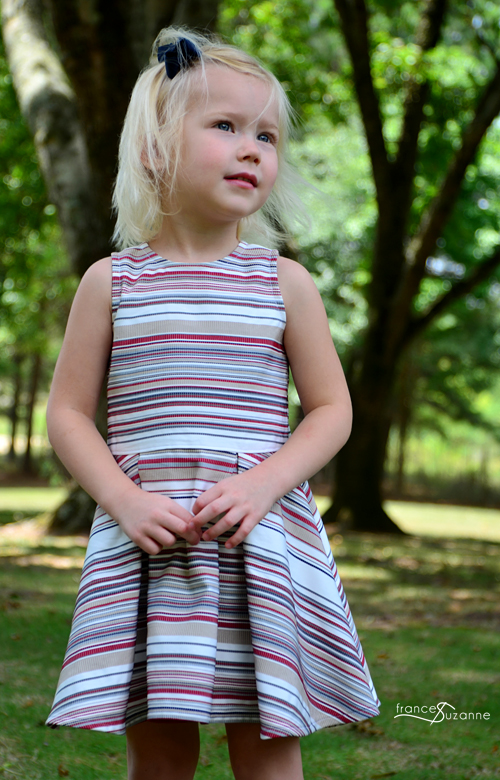 Of course, the possibilities are endless with the dress – but, we started SLOW . . . and SIMPLE by sewing a collarless, sleeveless version {taking 1/2″ off the outer shoulder seam and tapered under the arm in order to not eliminate any length from the side seam}. 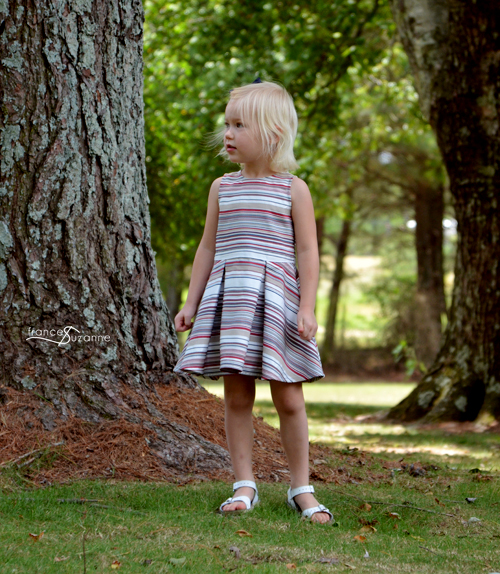 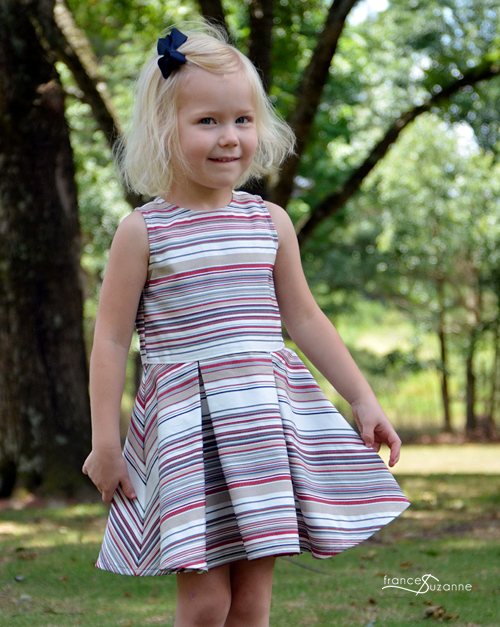 Since CL was ALMOST a 4th of July baby, we seem to have a knack at sewing her {or her sisters} something “festive” – almost every year. 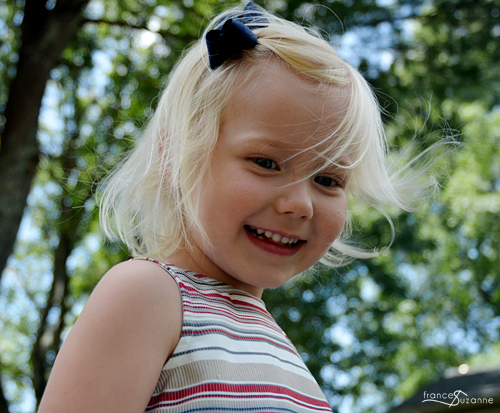 Personally, we think that this style of dress might have looked better on a slightly older child. 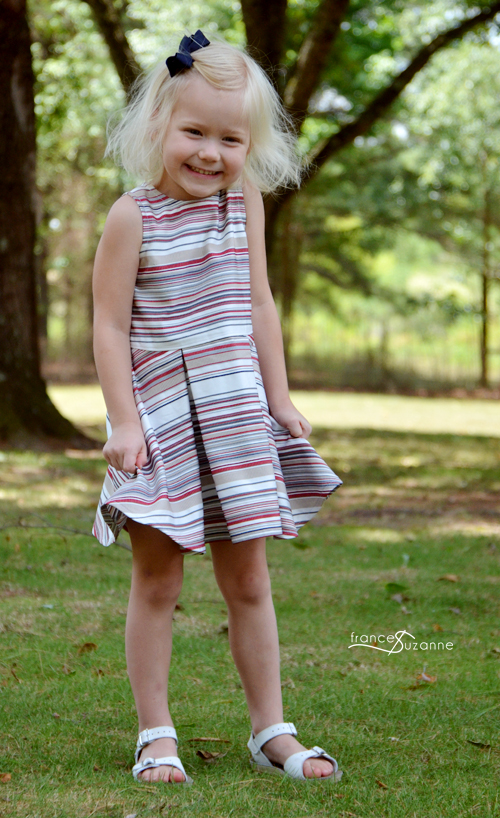 But, CL managed to look pretty cute nonetheless! And, was pretty excited to wear it as her “1st day of school” dress. . . 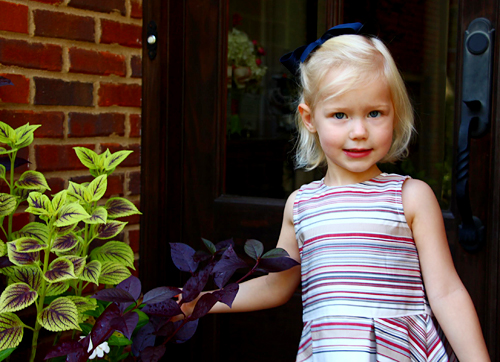 Man, does this dress twirl!!  That, in and of itself, made CL an “instant fan” while it continued to make us ever grateful for hideez {affiliate link}!! 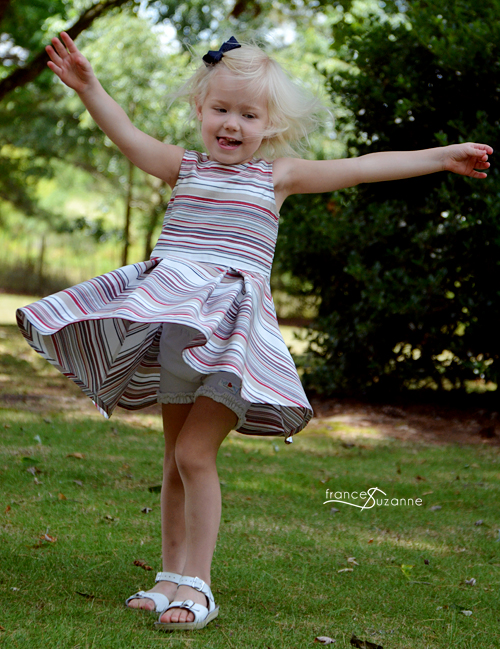 We used upholstery fabric to create the dress. So, the thickness of the fabric created some “poof” as well! Some people may see this dress as curtains, but we like to think we pulled off the look we were going for . . . 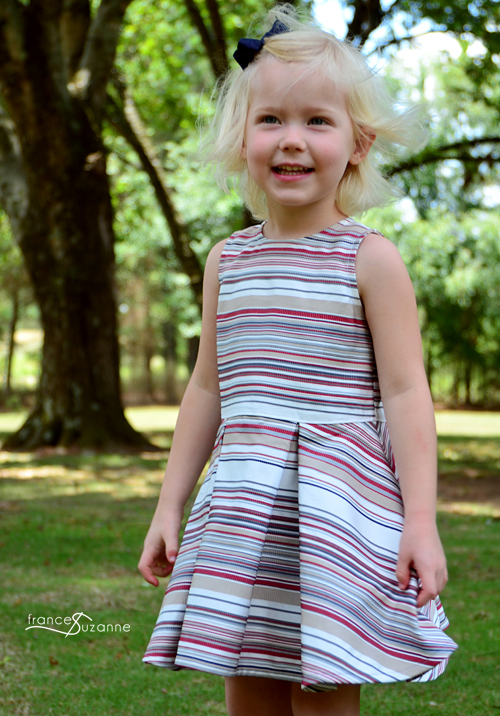 Now, off to sew some more “Building Block Dresses“!! 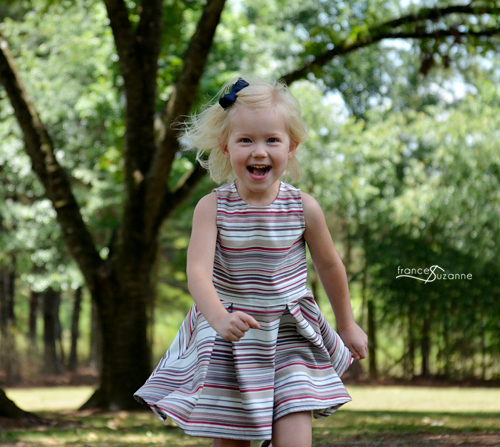 And, stay tuned . . . because on Friday, we will be talking about the book, Oliver + S Building Block Dress, as well as sharing another creation sewn from the techniques. It may, or may not, have 3 – 4 times the number of pattern pieces as this creation did, and when finished – might have made us jump for joy!! 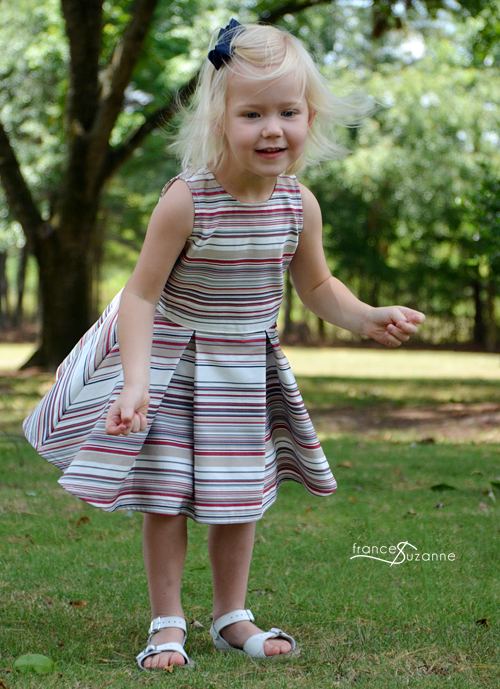 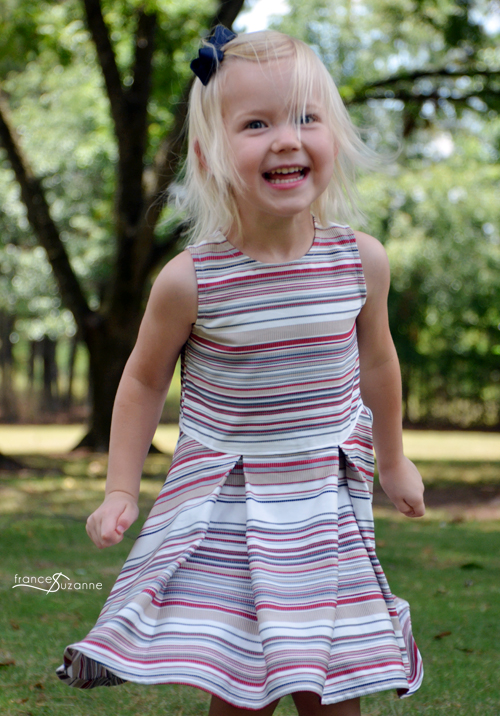 
I love this dress. Super cute with the stripes and the pleats. It’s pretty exciting to bs able to make whatever you want and know there’s a good reference guide to see you through it!


Well I am giddy about the book. I think I am ready to start drafting changes to dress patterns. As right now I havie been looking everywhere for a good skate dress to use with woven fabrics. Love the dress and must tell me what fabric you used.


Good for you, Chelle!! We REALLY need to get together and bounce some ideas off each other . . .as for the fabric? It was upholstery fabric from Hancocks when it was going out of business.


Adorable! I love the full circle skirt with the pleats. I am going to have to get this book!


Yes, you are Karen! It is such a helpful resource for any sewist.


Oh, how CUTE! CL is darling. =) I love the volume of the skirt- and the fantastic stripe-matching on the skirt side seams! I bought the book as soon as it was available… I love changing patterns into my own designs. =)


This dress DEFINITELY has the volume!! I think you are going to like this book A LOT, Charity!! It won’t disappoint {But when has Liesl ever disappointed?? Right??}


Well, I’ve only sewn one Oliver+S pattern so far, but it was impeccable, so I don’t see any disappointment headed my way! 😉


What an adorable dress! I love the addition of the pleats. I ordered the book and am anxiously awaiting its arrival


Well, with your speed and skills, there is no telling how many you are going to whip out!! Looking forward to seeing your many, many creations . . .


This is so cute! I love the pleats and stripes coming together on the side seams!


Love the circle skirt with pleats. Just love it!


Thanks, Audrey!! It definitely twirls!!


I think the dress turned up super cute. Love the effect the stripes create.