Hi strangers!! We feel as if we’ve gone MIA from our blog recently….it’s been an extremely good {and busy} month for us, and we’ve finally stopped long enough to catch our breath and “report in!”

Several months ago, we read some information regarding a “Sewcation in Orlando”, the annual convention of SAGA {the Smocking Arts Guild of America}. While we dapple in the heirloom sewing arts, we were further interested in the event because Liesl Gibson {of Oliver and S} was slated to be the Keynote Speaker towards the end of the weekend. The subject matter was JUST what we were needing…but more on that later… 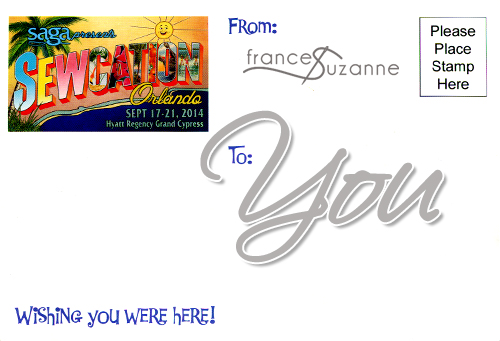 The camaraderie and ALL. OUT. FUN. at sewing get-togethers is contagious!! We blame Jess and her Girls’ Night Out Events – our first time to meet sewists and bloggers. You speak the same language….have the same passions….and feed off one another’s creativity. 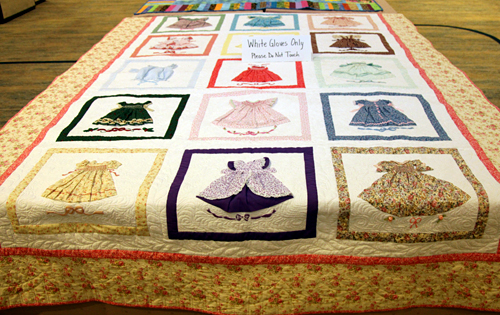 The ladies of SAGA are among some of the most talented out there. 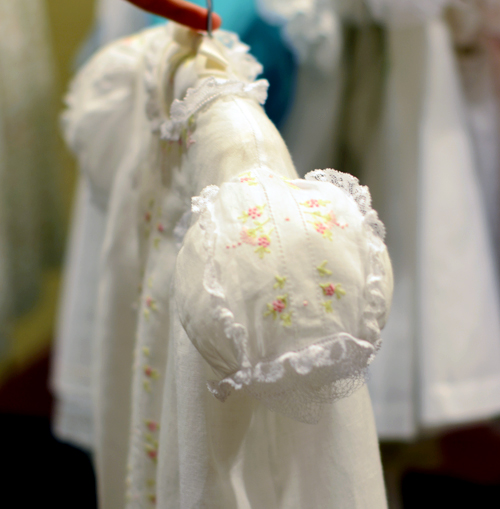 The skills showcased in the Thursday night “Show and Share” left our mouths gaping, and our minds spinning. 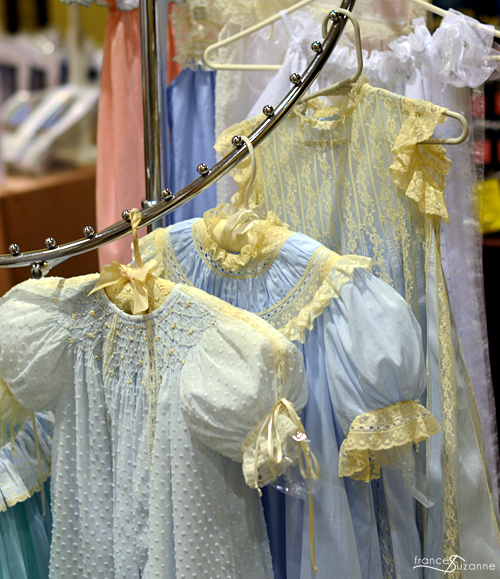 Each person we met was so warm and friendly, as well as very forthcoming on information, helpful hints, and genuine excitement for heirloom sewing!! 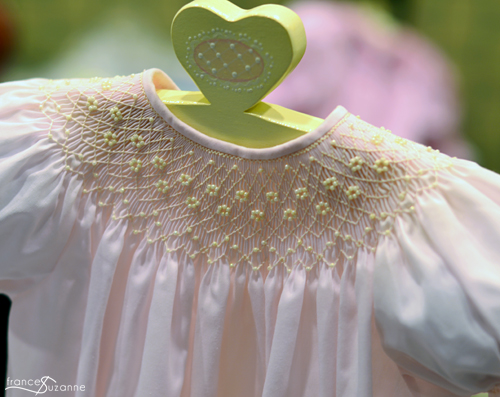 We enjoyed dinner with Susan {the out-going Region 3 Representative}, Lisa {the SAGA President-Elect}, and Liesl {Oliver and S}. There, we found out a bit more about SAGA…its current framework and its plans for the future. These ladies are on fire!! They have taken members’ feedback, and are restructuring SAGA to widen the demographics and availability of SAGA classes and conferences. Their enthusiasm was {once again} contagious!! 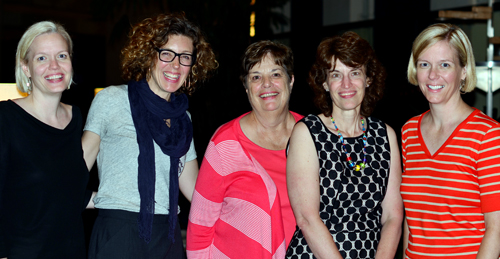 The next morning brought us yet another highlight to our trip…. meeting THE LADY behind The Southern Matriarch, Martha Broyles! 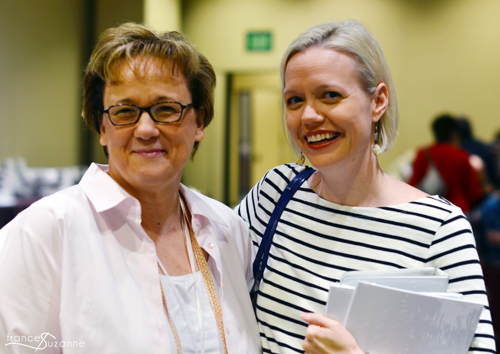 It was great to meet her personally {we might have squealed just a little bit :)}. Of course, classes were beginning, so we chatted briefly and then headed off to class. *It wasn’t until later that we invited ourselves {insert audible gasp HERE} to lunch with her {and friends}! 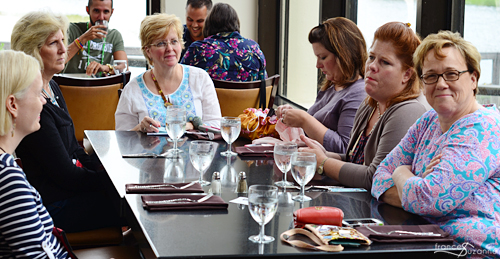 The SAGA Conference definitely didn’t disappoint with the class “line-up.” Unfortunately, there just wasn’t enough time in the day to soak up all the goodness each offered!! There were classes on construction, handwork, and pattern alterations. All taught by TOPNOTCH TEACHERS!!  It was honestly a “rock star” line-up! Ladies that know their heirloom sewing, forwards, backwards, and in between….the best of the best…. 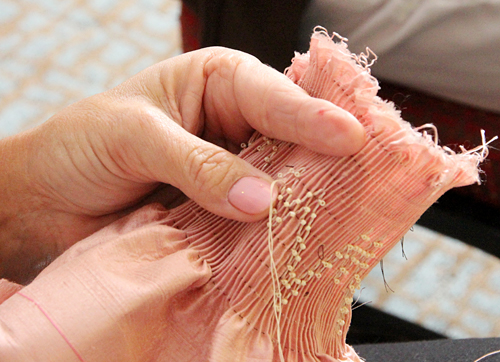 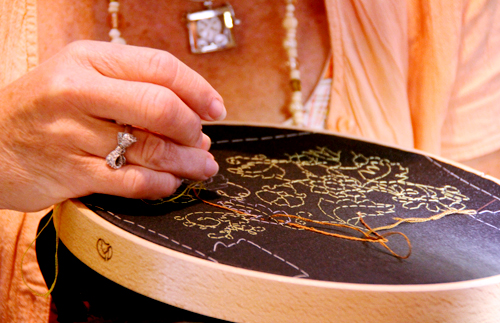 The Smocking Arts Guild of America is an extremely generous community of sewists! Each year, they donate thousands of garments to hospitals around the country through the Wee Care Program. This year was no different. OVER 7,500 Wee Care garments {daygowns, bonnets, and blankets} were donated throughout the year, and another 570 were gifted to Orlando hospitals from participants attending the conference.

Let that set in for a moment….these ladies are a POWERFUL FORCE in the sewing community, and are giving back to the community through their passion!! 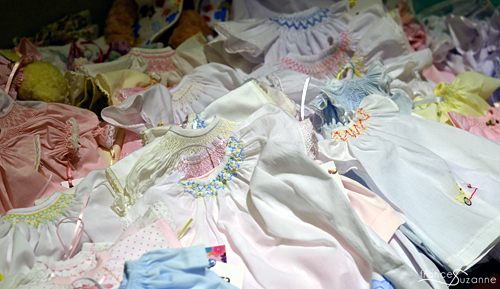 Check out all this loveliness!! Seriously…some amazing creations!!

There is always a banquet at the SAGA Convention – honoring those who have served {or are serving}, raffling off some amazing baskets of goodies, and giving everyone yet another opportunity to mix and mingle with one another.

Well, we signed up for the dinner….. L.A.S.T…..securing our seats among about half of the convention’s teachers, at “THE TEACHER TABLE.” Ummmmm, yeah….about those “ROCK STARS!” We might have been a little starstruck :). These ladies cover the gamut of fine sewing, and we were thrilled to meet them!! Each one was super sweet and kind to us – although we were the ones “breaking up the teacher party!” Had we not been at the “teacher table,” we wouldn’t have met these wonderfully, talented ladies and soak in some of their wisdom over a fabulous dinner. 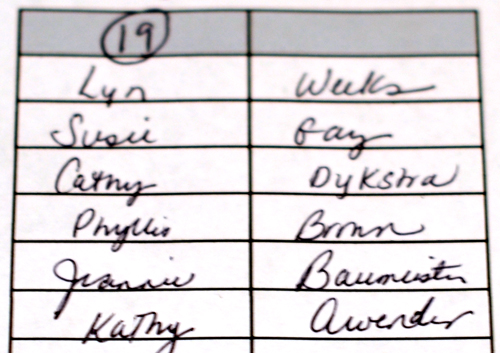 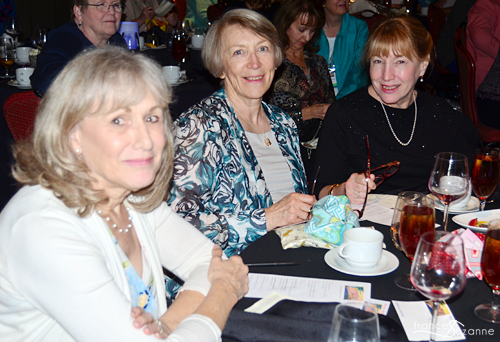 They humored us with photos, and truly adopted us for the evening!! 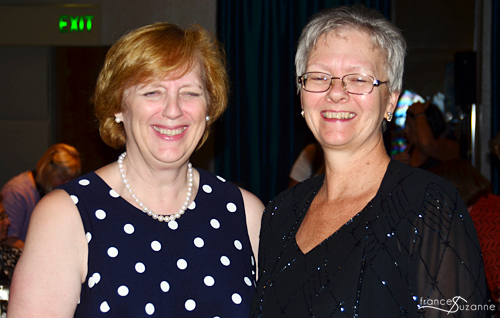 We had our eyes on the raffled “Bitty Baby” basket, but luck wasn’t in our favor.  How cute is that, though?? Seventy {PLUS} baskets were raffled, and many ladies left elated with the prizes they had won!! 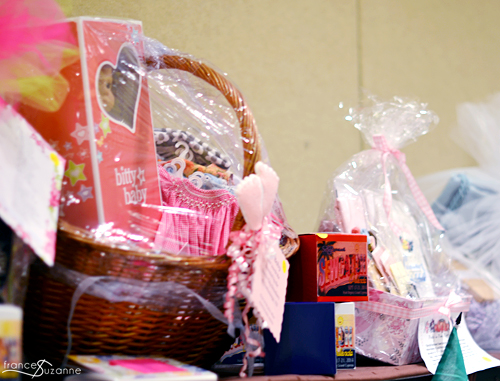 At the banquet, everyone in attendance was given a challenge: TO “SMOCK ACROSS AMERICA!”….passing along your knowledge of smocking, embroidery, and other handwork to sewing enthusiasts. 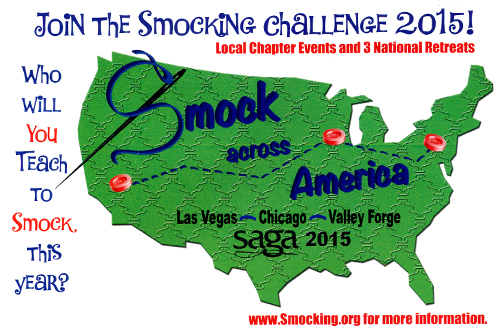 How many states and how many countries can be reached through the course of the year? SAGA is a worldwide organization that hopes to broaden its reaches through 2015. If you have ANY interest in heirloom, smocking, or needlework, we encourage you to check out SAGA!! Find a chapter near you….or start your own {it only takes three enthusiasts to begin one of your own}!!

Then, make plans to join a 2015 SAGA Retreat – an extended weekend of sewing fun with instant friends that share a similar passion as you do! Retreats are spread across the nation, making it as conducive as possible to attend.  It is an amazing opportunity that you won’t regret!! We’ve been grinning about ours since returning home….

As for our classes….the friends we made….and the places we shopped….

Well, you’ll have to come back for THAT recap…another day, another time!!!


What a wonderful recap of convention! So glad you were able to attend & enjoy the company of these enthusiastic stitchers. Hope you can make one (or more!) of the regionals next year!


Conventions like this are always so much fun! I enjoyed reading your recap and learning more about SAGA!


We know you’ve had your fair share of conventions….and they are exhilarating, aren’t they?? SO. MUCH. FUN!!


How about you come and teach me how to smock? That’s one skill I wish I knew how to do! It looks like you two had a lot of fun and a great weekend away! Very jealous but so happy for you!


Girl….we’ve got JUST the person for you!! We had no idea you wanted to know how to smock! Stay tuned for an email :)…


We are so glad that the two of you were able to join us and look forward to seeing you in the upcoming year as we Smock Across America! Check our website often to learn of upcoming classes, online Smockalongs, Region Meet-ups and local workshops!


We will definitely be checking in on the SAGA news and happenings… Thanks again!


Thanks for sharing the SAGA convention on your blog! Glad you both had a good time and stayed to enjoy the banquet with all those raffle baskets that were won-not by me (again)! Keep smocking!


We know…some people have all the luck, don’t they? Thanks for the pictures you sent our way. They really added to the post!


We were delighted to have you enjoy your classes with Liesl Gibson of Oliverands.com and the SAGA Sewcation in Orlando. Thank you for your post of your experience at our annual convention. Smock Across America is destined to be another huge SAGA success. Hope you will join us at one or more of our retreats. Anyone wishing more information can visit http://www.smocking.org. We would love to have you as members and join us in all our programs and events.


We’ve been doing some “calculating” / map-questing since returning home :)!! Maybe….maybe…


It was fun getting to meet you over lunch. What a wonderful recap of a great week. I look forward to seeing you at one of the other retreats.


It’s funny….looking back, we realized there were 4 states represented within the lunch group. Pretty amazing, huh? We enjoyed meeting you too!


It was such fun to meet both of you! I’m so glad that you enjoyed the convention. I hope that you, and many others, will be encouraged to join SAGA and continue enjoying the sewing fellowship as well as the learning that we all love to do. We need more fresh, young talent to join up with us!


Thanks, Kathy!! We really enjoyed our time with you too…. there’s so much knowledge to take in at one of these conferences!!


Thank YOU FrancesSuzanne for a great recap of convention and telling the story of SAGA’s members giving hearts so well. As a member who couldn’t make it to convention this year it was great to hear from someone with a fresh eye to all that happens at convention and what it means to so many of us.