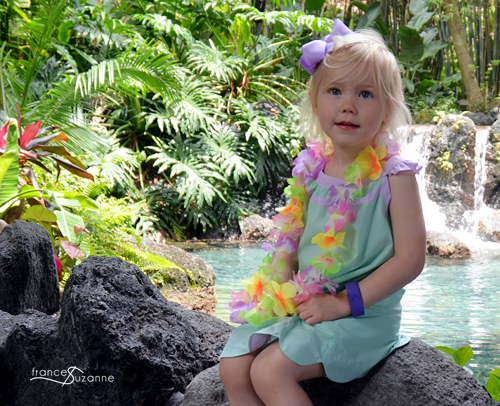 The planning of this creation proved to be quite difficult for us . . . 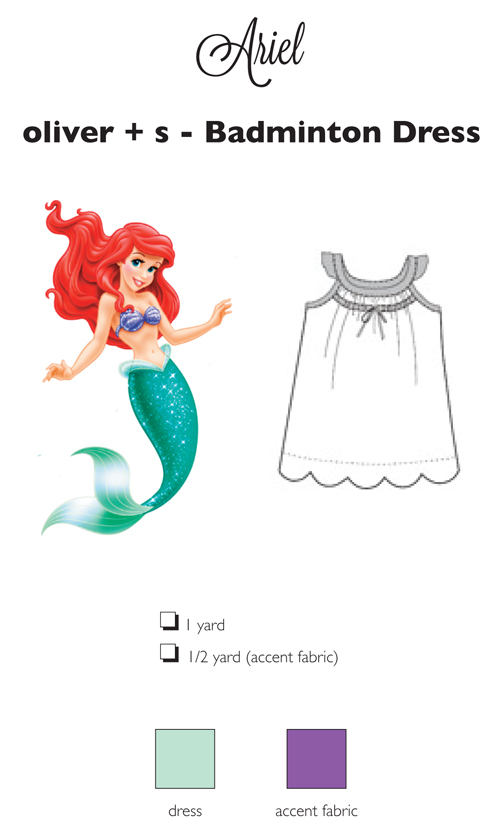 Creating a Sewing for Disney: Ariel outfit {without it becoming a costume} that would be wearable through the summer . . . 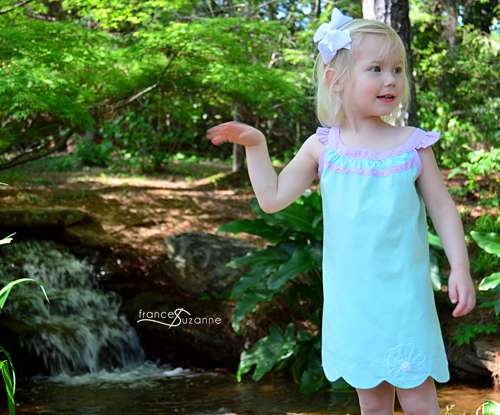 When in doubt, embroider. 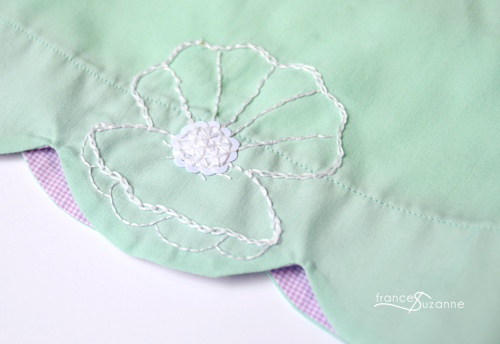 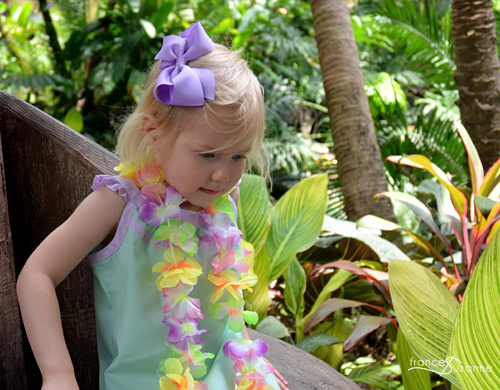 We sewed the Oliver + S, Badminton Dress {sz 3, with minimal modifications} . . . thinking the scallops on the hemline mirrored that of seashells and/or waves. **Minimal modifications include: In an effort to lessen the neckline width, we sewed the yoke edge with a 3/8″ seam – instead of a 1/2″ seam, as directed. Also, we eliminated the tie in the front yoke, and sewed it as one piece across the front. 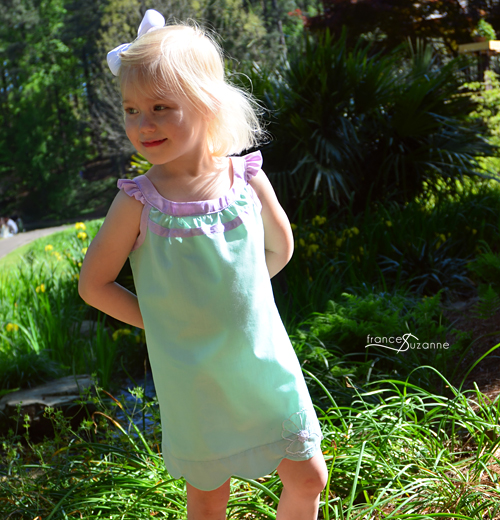 Then, using one of the scalloped areas, we embroidered an open oyster with a pearl tucked inside. 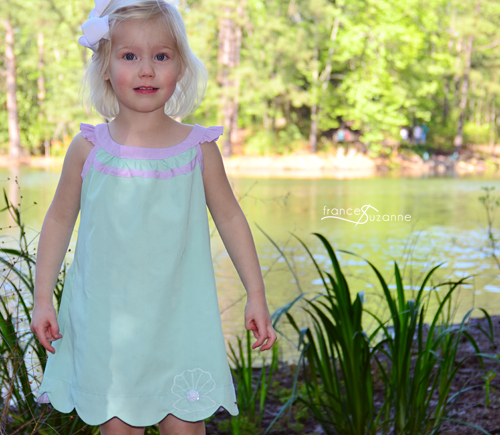 The colors selected were Ariel-esque: mint green and lavender. 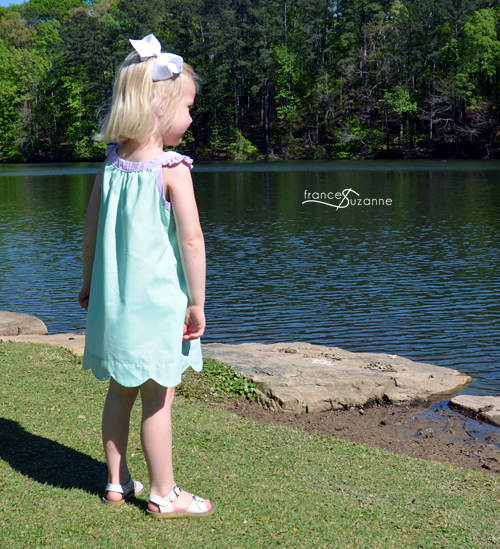 And, the shimmer on the pearl gave the dress a little “flash!” 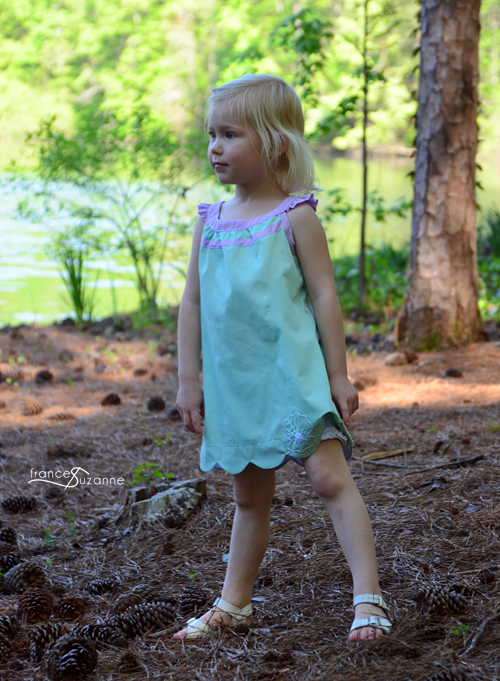 This dress is another great pattern for hot, summer “Disney days” at the parks!

Side note here: We were educated this past week on our “Disney Sewing.” There is actually a term used to describe a more subtle approach to sewing for Disney. . . .giving characters a “nod”, and making the garment wearable in other circumstances. 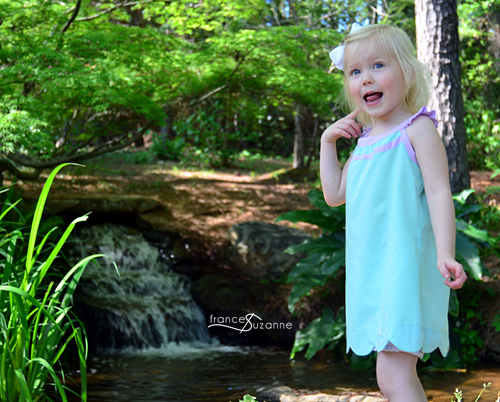 So, there you have it.

Who would have known?


You all did a fab job with your Disney sewing! The “nod” to Ariel and The Little Mermaid is my favorite!


Thanks Cindy!! It may not be your favorite when we are all said and done :). CL’s favorite will be the last one shown in the series. And, par for course, it has surprised us yet again!!


Love this whole series! Every dress is so perfect and when they wear them, I’m sure they have many happy memories of their time at Disney.


Thanks Audrey! We had A LOT of fun challenging ourselves with these creations . . . and, now with showing them to you!!


I had guess The Little Mermaid when I saw the Instagram photo and I guessed right! Your Sewing for Disney should looks like a fun project!


It WAS a fun project {and quite heavy on O+S patterns}!! This is pretty much our blog posts for the summer . . . BEWARE!


Oh, this one may just be my favorite, though I’ve admired them all. Before seeing this rendition of the O+S Badminton pattern, it didn’t have a place on my wish list but I’ve changed my mind. Are those little shorts peeking out from under the hem in a couple of shots from this pattern too?


You are sooooo sweet to say that Linda!! We are tickled to have inspired you a bit!! As for the shorts, they are ‘hideez’ – store bought, and a LIFESAVER!! I believe the skirt option in the Oliver + S, Badminton pattern comes with built-in shorts however.


I love the little hint of Ariel with the embroidery and colors! Very cute!