It’s a far cry from perfect, but if the house were on fire and everyone {as well as photographs} were safe, I’d grab this creation and run! 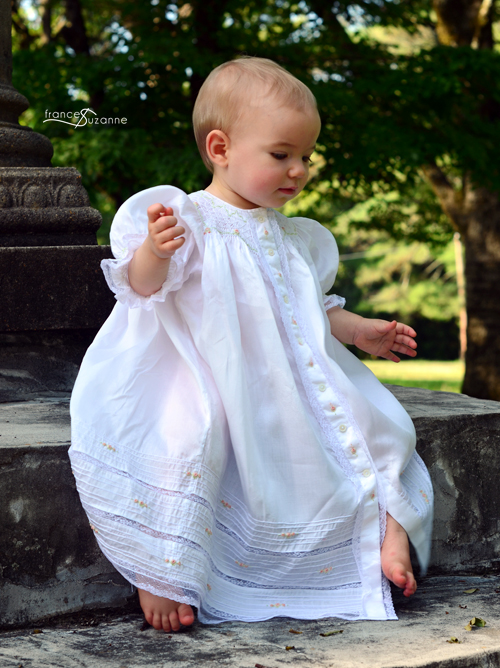 Maybe it is the fact that it was intended to be LG’s Easter dress and was finished almost 3 months late. The dress is truly a labor of love. 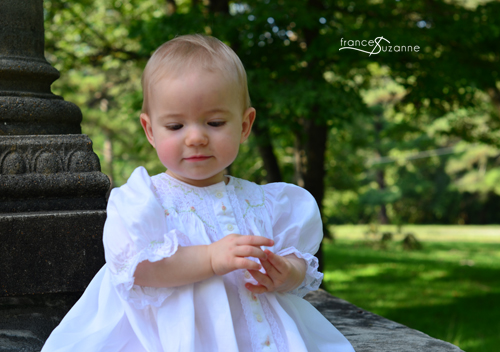 Typically, we are very low key about care of our creations and even when and where they may be worn, but this one came with regulations. Hand wash and try not to let her crawl {or walk for that matter} while wearing it. 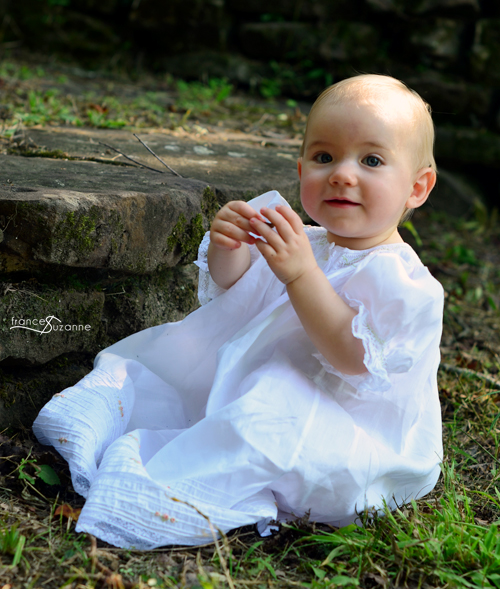 Impossible, I know, but I’m paranoid she’ll rip the lace at the hem and how can one fix that? 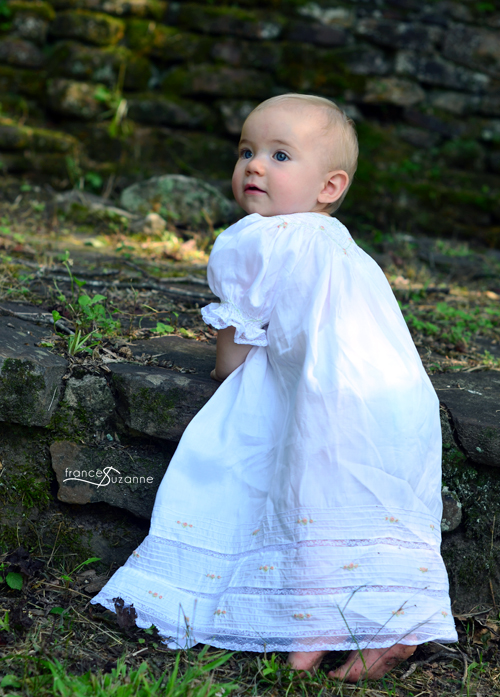 There are a multitude of ways this version of Twinkle Toes by Susan O’Connor of Australian Smocking and Embroidery (Issue 58, 2002) could be improved with some practice and a little bit of know how. In fact, Ms. Susan might slap my wrist for not creating bullions as directed in the pattern, but sadly I couldn’t get the looped version to cooperate. 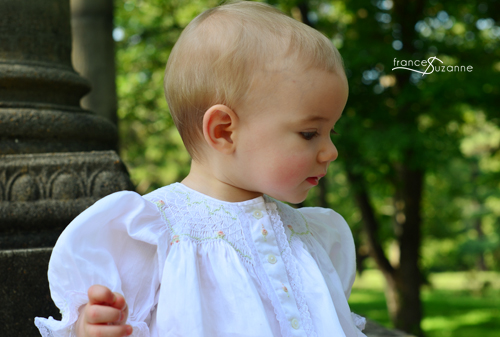 There was no love lost when all those bullions were finally complete either. I just never got to the point I could truly say I enjoyed sewing them. But seriously, is there anyone out there that enjoys sewing bullions? #inquiringmindswanttoknow 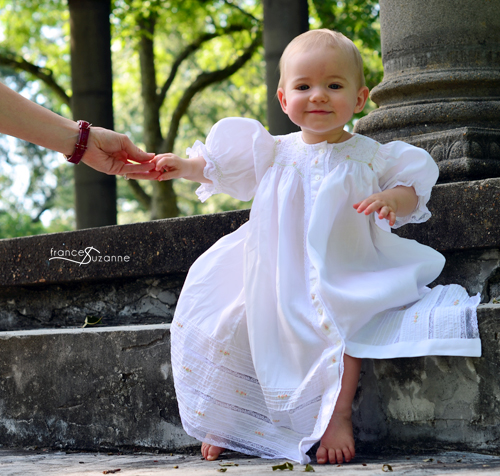 If I were to list the improvements, mis-sews and directions not followed precisely, the list would be lengthy! However, I want to try my best to point out the positives today, because I am pleased with this accomplishment! 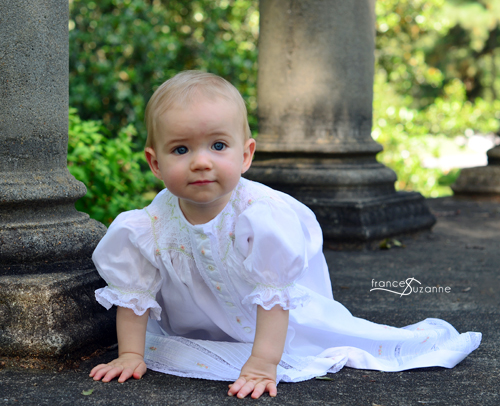 First, besides the pleating (we don’t own a pleater), the dress was smocked, embroidered and sewn by us! The only other heirloom dresses that we’ve sewn have either been finished from a class we started or we’ve had an abundance of help putting them together. 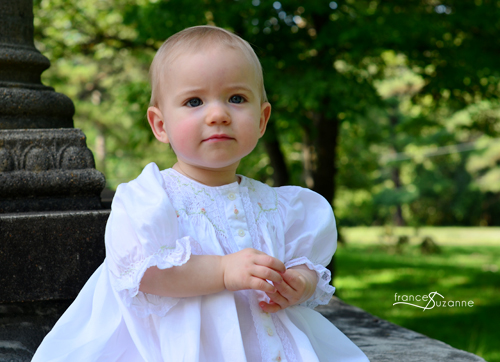 I’m not going to kid you, often it was difficult to motivate myself to attempt to complete tasks at hand. Not to mention the process seemed never ending. “I think I can. . .I think I can. . .” 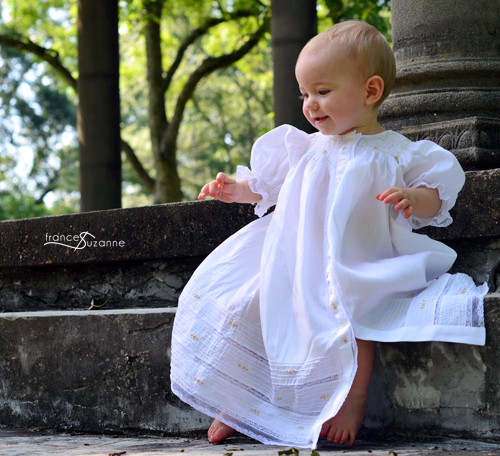 I’m also pleased that no shortcuts were taken on the bullions at the “hemline” of the dress. We debated possibly doing every other group of flowers, but opted to buckle down and stitch all of them. I don’t want to fool you, they aren’t perfect, but they are all represented, and I’m thrilled with the completed look! 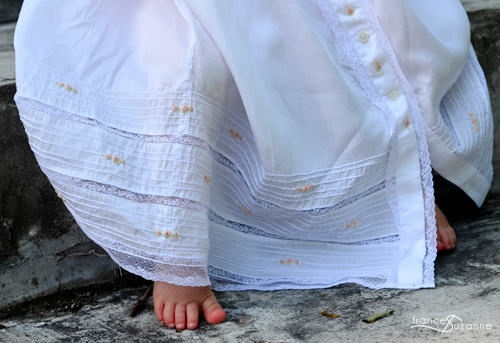 Not only am I proud, but I also enjoyed sewing the lace. While it takes longer than just sewing other edgings and trims, I enjoyed it. Maybe I had a little more confidence this time, but it was fun {not to mention gorgeous} when completed. 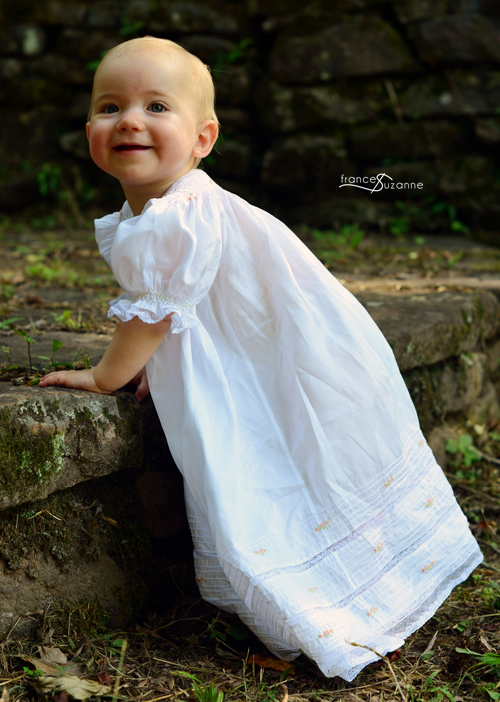 Now, if I’d had to manipulate gathered lace on this creation, my story might have a different tone to it. 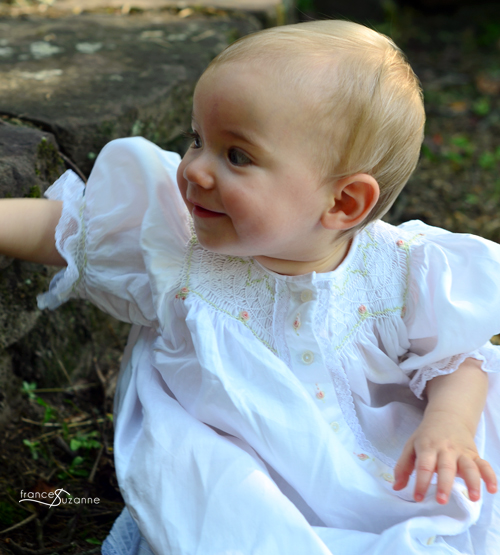 While the smocking is not something I’m really proud of per se, since it is within my gamut of skills, I thought it turned out just fine. Again, it was another portion of this creation that I truly enjoyed! Geometric smocking is extremely relaxing and gratifying. For any of you who haven’t tried it, you must! 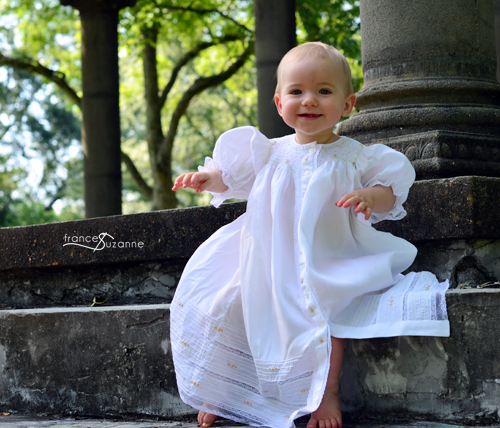 I loved sewing the pintucks too, although never nailed the correct pressure and tension settings. Basically, the pintucks on this dress were just like sewing a straight line with a twin needle. Again, it took time, but not a whole lot of skill. 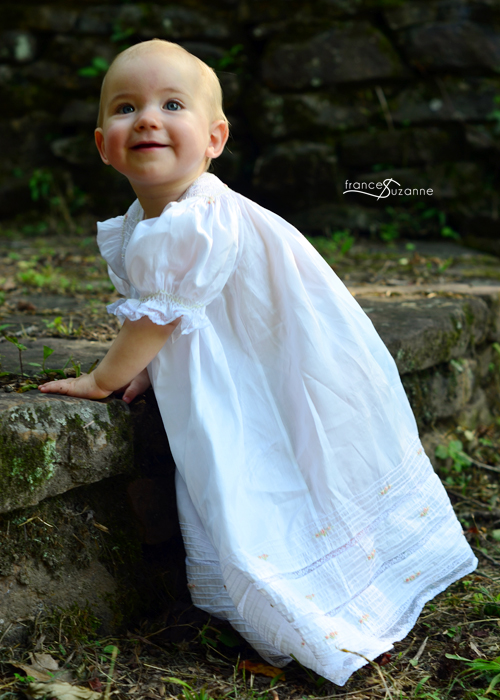 I’m pleased that while it was difficult to put that much time into one creation that only one niece may wear, I persevered to sew the baby something of her very own. Because while handmade-me-downs are wonderful, we all like to feel special some times! 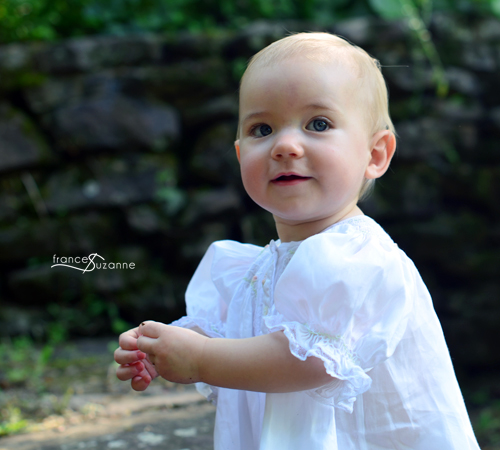 As I step back from this creation and the entire process, I sometimes want to beat my chest with pride knowing that I will not be doing a similar one anytime in the near future. After recovering from a few weeks, I would however accept the challenge of something either smocked OR heirloom with lace {not in combination} and most importantly no bullions since my yearly quota has been met! 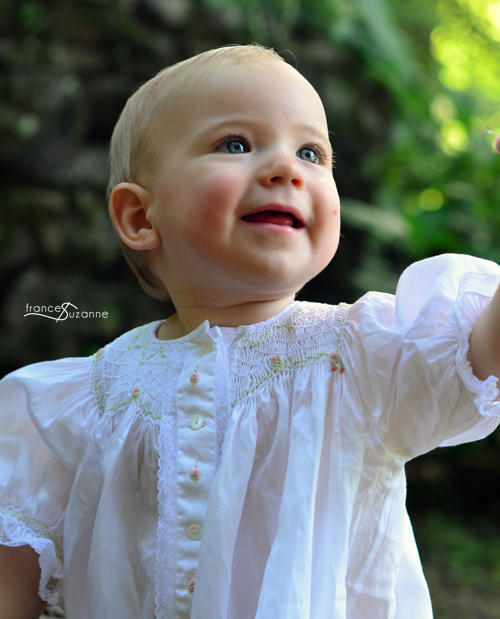 So, if your house were burning and everyone was safe {etc., etc.} and there was time to grab a favorite creation {and get out alive} what would you choose to grab?


The smocked dress looks fabulous. Just look at all the pin tucks, lace and yes those pesky bullions (BTW, I enjoy making bullions) it’s truly a work of art!
Your photos are exceptional too.


The dress is truly beautiful as is your niece. You were right that she did deserve a dress all her own and boy did you deliver. Some day if she has a little girl she will be putting that dress on her! My mother made a very special dress for me when I was a baby that they had a picture made of me wearing. I loved looking at that picture as I was growing up. When my daughter was born I couldn’t wait until she was big enough to wear the dress. I loved to dress her up in it. When my granddaughter was born I passed the dress down to my daughter to put on her. My mother had died when my daughter was a child so it was a way of connecting her to her grandmother that she only remembers slightly. This dress will probably follow the same route except if she does have a little girl she will probably know her Great-Aunt!
One other thing…I enjoy making bullions!


How special . . . what a precious story {and memory}!! Thanks for sharing!! Maybe we’d like making bullions more if we took a class on the proper technique {?}. Maybe??


This is absolutely gorgeous! Top to bottom, it’s stunning – as is your niece. Your devotion and love is obvious in every stitch and detail.


This is so delicate and beautiful! I don’t enjoy making bullions either, but I love how they look. The picture of LG’s little toes peeking out under the hem is perfectly sweet!


FINALLY! Someone else that distastes sewing bullions . . . .


What a beautiful combination of priceless smocking, embroidery, lace and child! I have had this dress on my to do list since the magazine issue was published but I am now onto my 2nd daughter (as the first is now 13 and wouldn’t tough smocking with a barge pole) so one must get her skates on or else it will be waiting for granddaughters instead (and I have been told I am in for a long wait!)