This dress has been on our “must sew” list for entirely too long!! 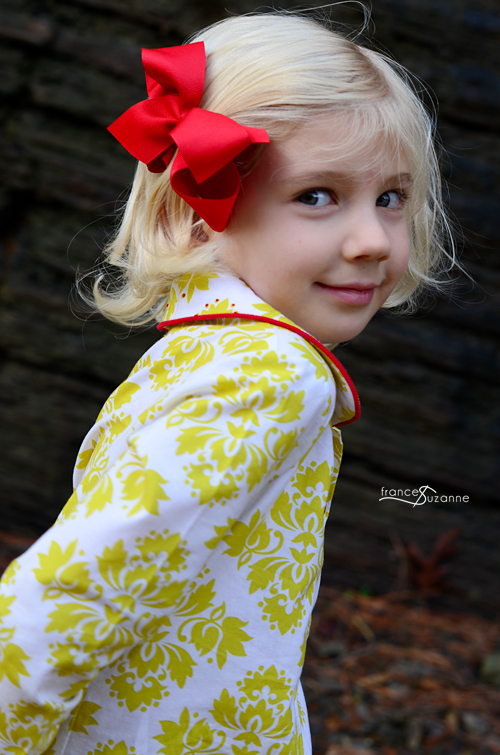 It’s a style that we had planned to sew last winter, but never got around to it.

We don’t know if you’ve noticed, but winter patterns are not nearly as prevalent as spring and summer ones. Hence, the “need” to sew it.

Now, the short-sleeved version of this dress is super cute as well . . . {and one we might like even more that this one}, so we are looking forward to sewing that version in the near future.

As for this version of the Oliver + S, Jump Rope Dress? It was just meant to be!!

You see, our nieces were introduced to the Sound of Music this past summer . . . and FELL. IN. LOVE. WITH. IT!! 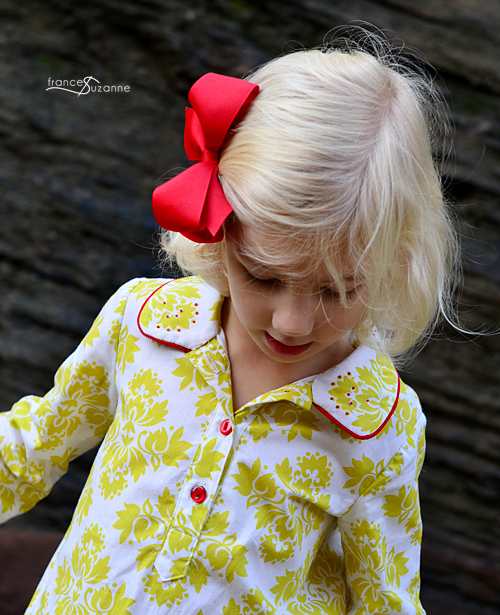 The oldest two know many of the songs, and love to “perform” them around the house. 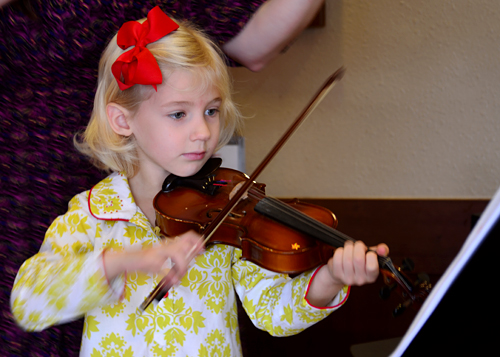 If you are familiar with the story / movie, EA’s fabric MIGHT resemble the drapes that Maria utilized to make the children’s”play clothes”. We thought it did . . . as did EA! 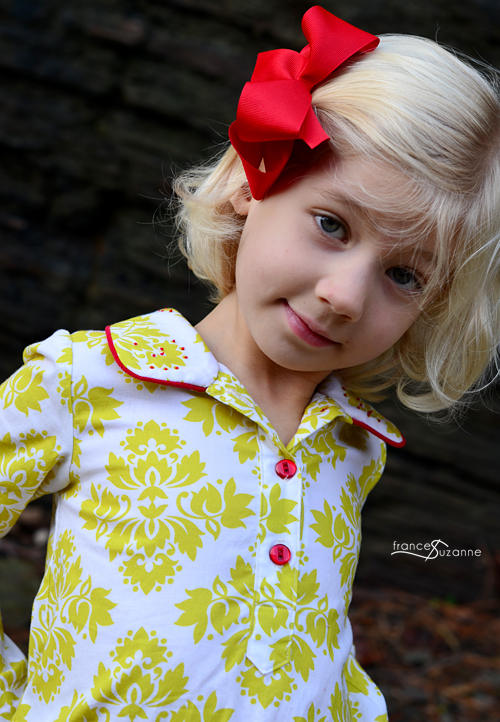 After adding some minimal embroidery – red, French knots – in strategic locations {collar and front section of the dress} plus some red piping, and POOF!! 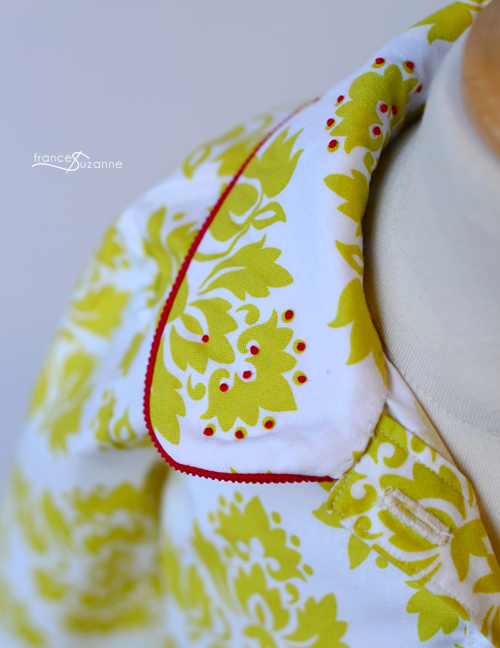 A “Sound of Music Christmas dress” for a very special niece!! 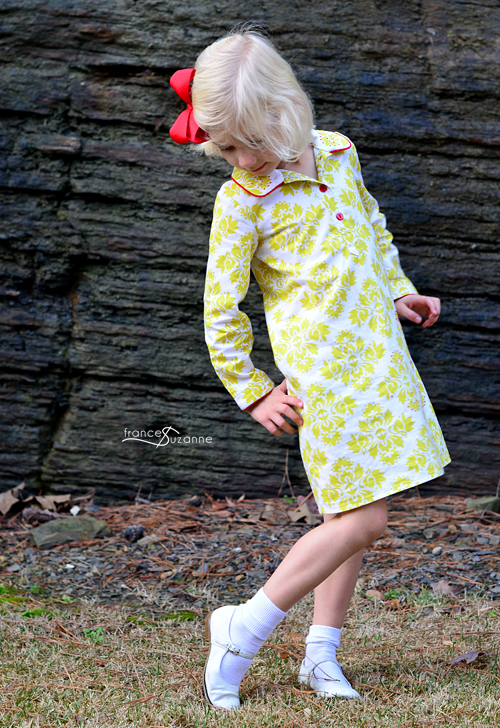 Since our niece detests small neck / head openings, we inquired about the placket roominess on the Oliver + S forum. 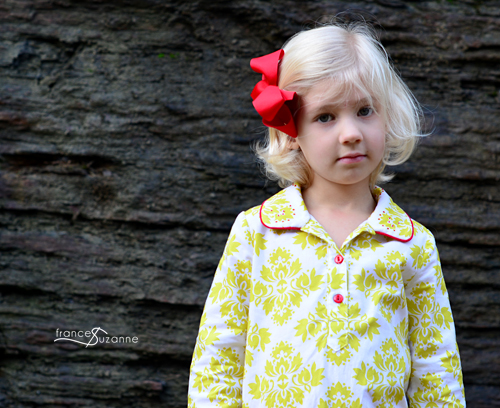 Based on others’ responses, it seemed the larger sizes were “spot on”, and the smaller sizes were a tad more fitted. 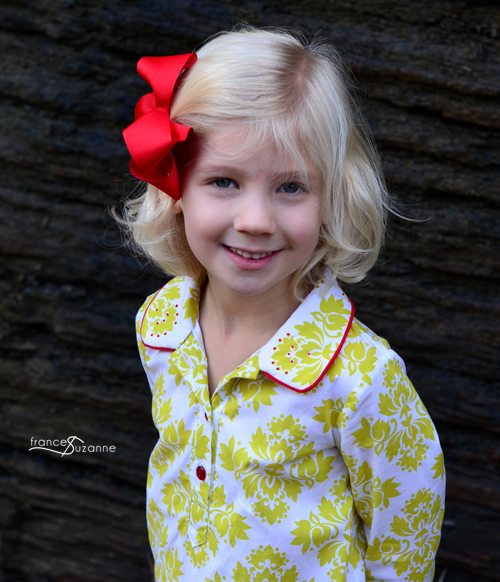 So, we sewed a size 4 – ALMOST “as is.” Except for adding some length. The sleeves were changed slightly as well – to incorporate red piping at the sleeve opening. 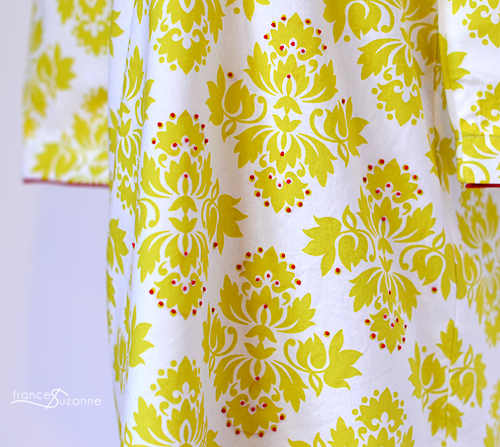 It seemed to “fit the bill” for a unique Christmas dress, so it’s off to sew another “winter version” of the Jump Rope dress. 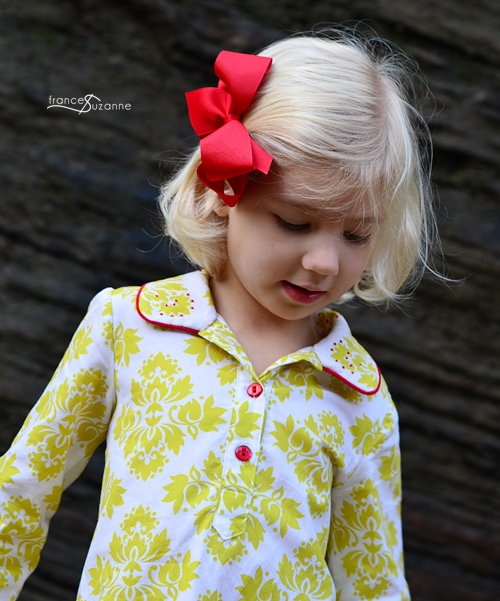 Psst: it’s the one we planned to sew last year, but never got around to it . . . and now, it’s ALMOST done!


WOW! What a fun dress and such a cute backstory. Another pattern I will have to give a whirl – as we are in long sleeves here in New England from October to April!!


I love the red details, they indeed give it a Christmassy feel.


I would not have thought to combine that fabric with red. It is absolutely perfect!!


Well, it isn’t ANYTHING like we were envisioning when we began our “fabric shopping adventure!”


This one is just so cute! I enjoy making french knots and your use of them here is magical. Stowing that one away in the gray matter. Yesterday we found out that the next grandchild is going to be another girl. I will have three to sew for now also. I do enjoy sewing for the one boy but you can only sew cutesy boy stuff for so long and he is nearing that age. EA is just darling in this dress and seemed to be having fun at the shoot!


Once again all the special touches make it perfection! And she has such good taste in fabric and musicals!


I love the pattern the way you finished it..but I am crazy about all your projects. I had to write today just to tell you how beautiful your niece is. Hate to see kids grow up, but she is such a lovely girl.


I love the placement of the French knots! This dress looks lovely on EA.


I’ve always loved this dress pattern and this is exactly why!
Yours is beautiful and suits your niece perfectly. Can’t wait to see the next one.


WOW! At first glance, this looks like a simple dress, but I love all of the little details you added and love the clean lines and beautiful fabric!
Nicely done, as always. Your neices are super lucky to have you in their lives.


Thanks Michelle! The blessing goes both ways – we are so fortunate to have them in our lives


Everything that you guys sew is simply wonderful but recently (actually, since I had a daughter and now feel I need to know these things

), I’m gobsmacked by the bows in your nieces hair – please, please let me know are they tied like that, or are they on a clip? and if they are, where do you possibly get such perfect bows from? thanks!


thanks so much – those bows (and the FrancesSuzanne sewing skills!) are exactly what I need !