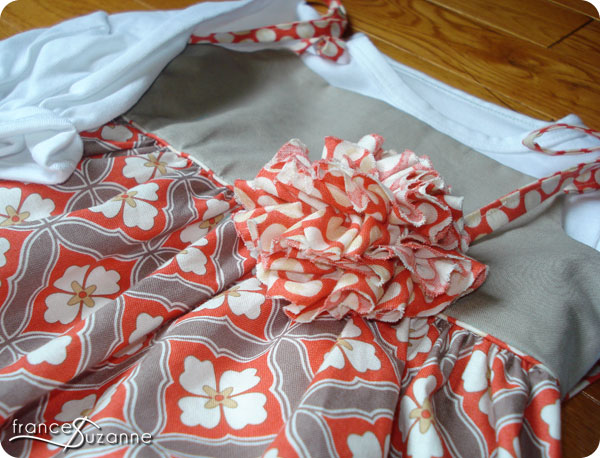 When determining the order for our KCWC week sewing challenge, we opted to save the one we were most looking forward to for the grand finale. 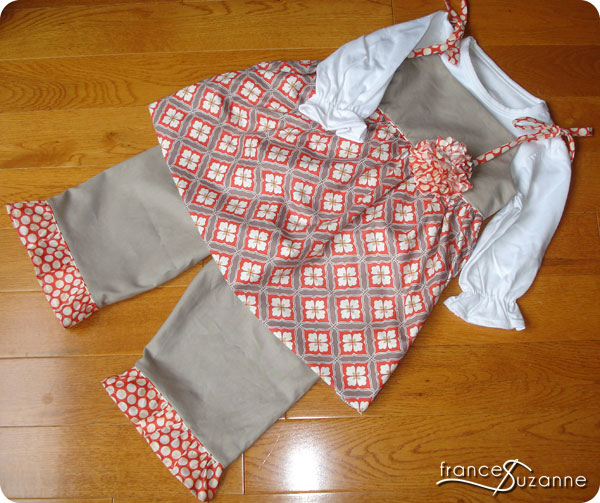 Last year, we had made EA a Christmas outfit by modifying the Bonnie Blue, Shelby Kate dress pattern. 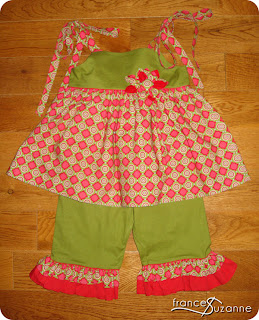 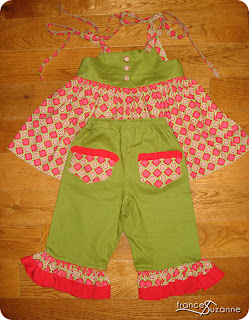 It came together nicely, and we were pleased with the result…. 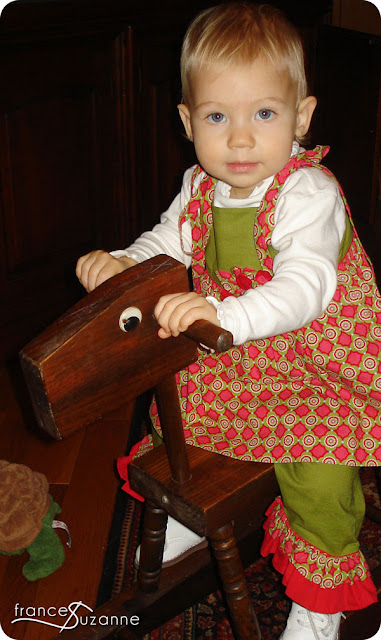 so, we wanted to make her a second one, but this one for the fall
{fabric selection: The Emperor’s Garden, a Collection by Maywood Studio}. 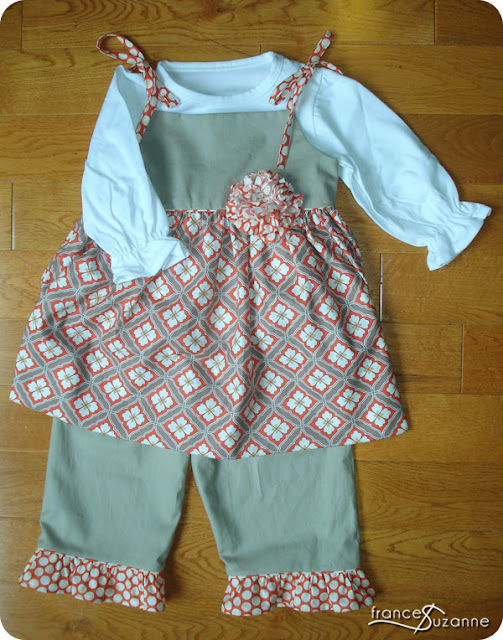 The pants were made from the Jackie Clark Designs, Britches and Bloomers pattern. This pattern is ‘Old Faithful’ in our pattern stash, and has been used the most of all we own. Our jedi master recommended buying it when we were looking for a good go-to pants pattern. We added piping between the pants and ruffle because we couldn’t stand to have something made without piping detail. 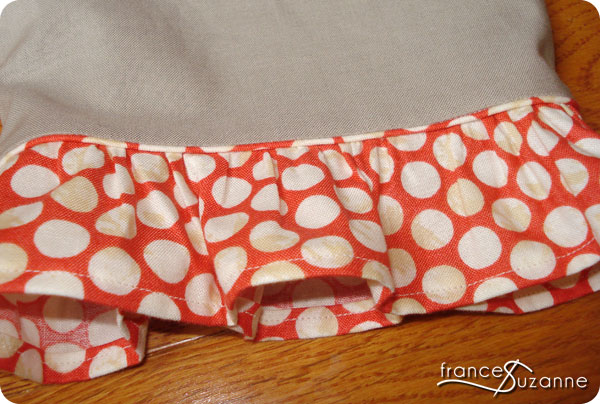 Instead of adding two pockets, we opted to add one on the right backside. 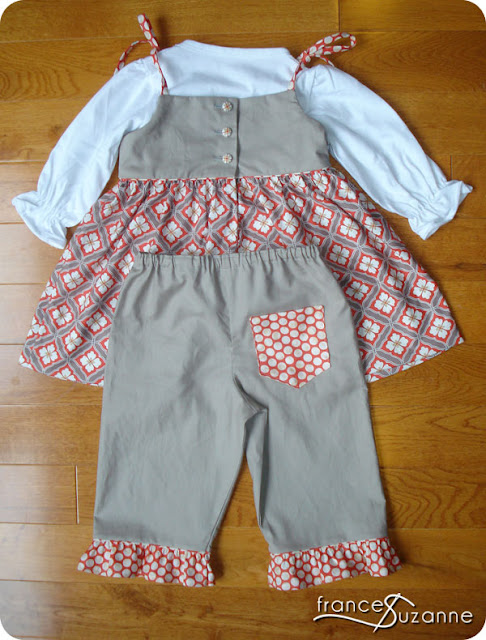 The top portion was made by modifying the Bonnie Blue, Shelby Kate dress pattern. We lengthened the yoke by one inch, and added piping to the base. To accommodate wearing a shirt underneath the top, we added 1/4 inch width to the front of the yoke, as well as the back portion of it. We also chose to make skinny straps for the shoulder ties, instead of ribbon and/or the pattern piece given. 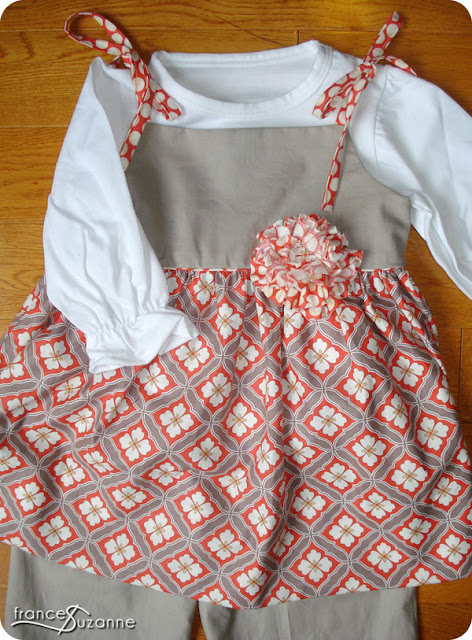 Then, we cut two rectangular skirt sections to gather and attach to the yoke pieces. The skirt measurements in the Shelby Kate pattern were irrelevant since it was for a dress, and not a top. We shortened the skirt length given and did not gather the skirt as much as the pattern stated. When we cut these skirt pieces, we allowed for plenty of hem (as an area to adjust length if necessary).

The fabric flower was an experiment. The next one will be better, and then we’ll blog about it! Our final detail came in the three covered buttons placed on the back yoke. It tied in the skirt portion nicely, and seemed to complete the outfit. 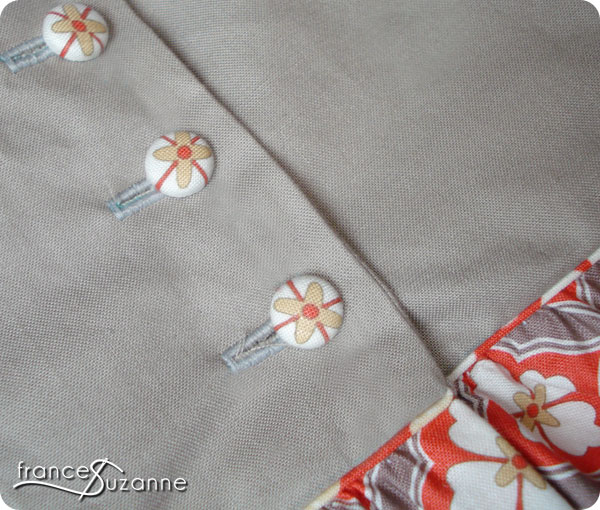 So, what did we think of our first KCWC? The upside about KCWC was that it pushed us to get some of the nieces’ fall clothing completed! While we sew nightly, and have been frantically trying to complete the list (since it IS mid-October)….KCWC threw us into a sewing frenzy, as well as a blogging one – trying to post a short synopsis on our completed garments. The downside was that we felt sloppy at times, and made careless errors along the way! 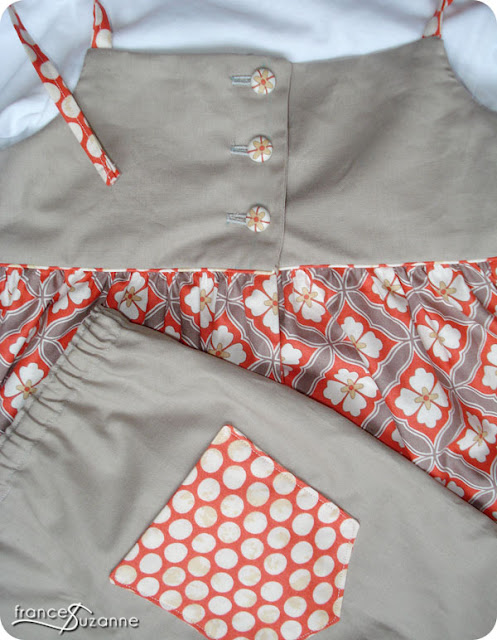 Too bad we can’t kick back and relax in the euphoria of completing our KCWC goals and list…..Unfortunately, we’ve got Halloween outfits and costumes waiting in the wings….and the rest of the ‘Fall to-do list’. The big question is: Will we complete the Fall list before the winter season begins?!?! Time will tell….time will tell.