As we began 2015, we decided to forego “Sewing ReSEWlutions” and instead focus on a “Word of the Year“… a concept introduced to us by Melissa, of Melly Sews. What did we land on??? TEXTURE. In all its many shapes and forms!!

So, when Melissa invited us to share in her 30 Days of Sundresses series {you can enter a giveaway HERE}, we thought: why not involve some texture?!?!? It seemed more than fitting!

If you aren’t aware of it, the 30 Days of Sundresses series is in its 4th year, and always holds oodles of tutorials, free patterns {we can’t wait to try THIS ONE that just happens to be in the “perfect size” for a niece}, and sundress inspiration through the month of June.  It has something for everyone – women’s patterns, as well as children’s patterns, are featured during the course of the event.

As for us, we thought: why not incorporate a form of TEXTURE we had been itching to try….but hadn’t had the courage to complete yet!?!?! You see, we had gifted one another some Alabama Chanin books for Christmas {ONE, TWO, and THREE}. While Alabama Chanin techniques are typically featured in women’s clothing, we hoped to use some of these “textured techniques” in children’s clothing. The goal was set, and now it was time for implementation! 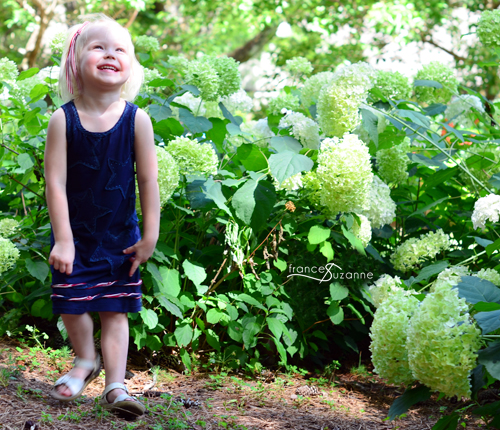 For this dress, we began with the free tank pattern {sizes 3 – 8} by Scattered Thoughts of a Crafty Mom. We lengthened it to become a dress, using the slice and spread method learned in Liesl’s class at SAGA.

Now…would you like to try out a few Alabama Chanin techniques? In this post, we will walk you through the steps taken to create CL’s festive attire, but please know that you can take these techniques and use them in a variety of sewing projects! 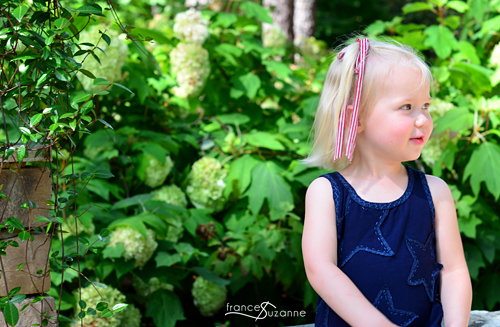 1. Cut the pattern pieces and fabric, eliminating the 1/4″ seam allowances for the armholes and neckband. These edges will be left “raw” and unfinished for now…

2. Do not use the pattern pieces for the neckband and armholes. Instead, cut {in the direction of the greatest stretch} two 13″ x 3/4″ for the armhole bias and one 16 x 3/4″ for the neckband. **Please note: This is more than you will need for these pieces, but will give you ample material to overlap eventually.

3. Place the armhole and neckband pieces aside. These will be used later.

4. Sew the tank pattern as written, except for finishing the armholes and neckband areas.

Now, it is time to go “Alabama Chanin”…. although, please note: many of Natalie Chanin’s techniques were not done “by the books” for us. We had to make some things work, based on the supplies we had on hand. We DID know that we wanted to be “subtle” with many of these techniques because Natalie works with similar tones in her creations.

Three “Alabama Chanin” techniques were utilized in this sundress:

negative reverse applique {as used in the stars}

a Cretian stitch around the armholes and neckband

and a folded-stripe applique along the hemline

The negative reverse applique was a two-fold process for us: 1) preparing the fabric and 2) stitching the fabric.

To prepare the fabric:

2. Place the cardboard stars on navy knit {this is the same fabric you used for the tank dress previously sewn}. 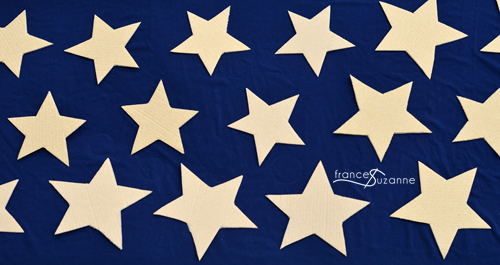 3. Paint {by spraying the paint from a spray bottle} around the stars, using a mixture of fabric ink and water. We mixed 3 parts paint to 2 parts water. The important thing to keep in mind here is you must have the mixture “watery” enough to spray from the spray bottle. The paint itself was a light, baby blue hue {see photo below} to keep the subtlety of the overall “look.” 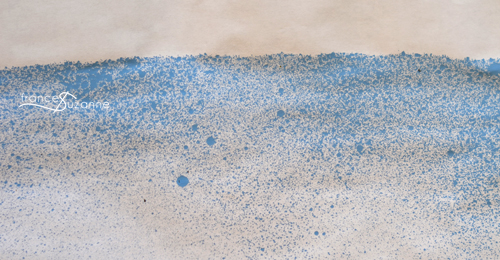 At this time, we also sprayed the armhole and neckband bias strips, as well as some extra material for the folded-stripe applique {our 3rd “Alabama Chanin” technique}.

4. After the paint dries, remove stars from fabric – leaving a star imprint behind. Follow the fabric ink instructions to set your paint by heat, and eventual washing / drying. 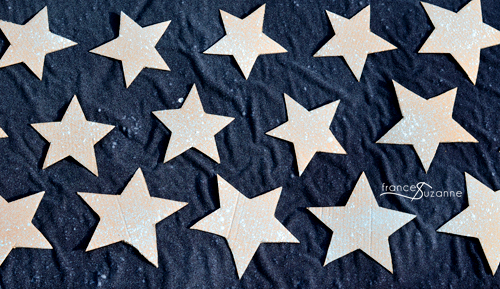 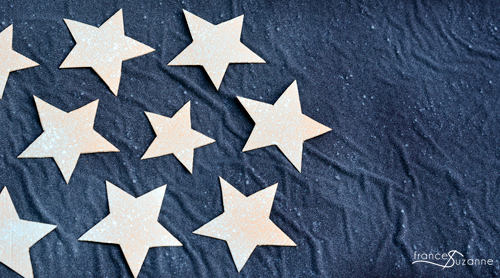 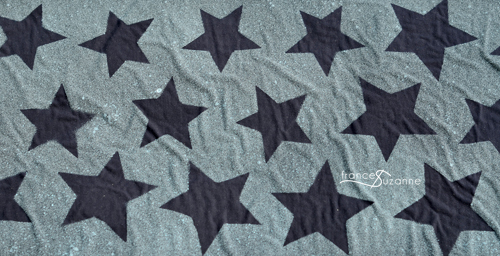 5. Cut the fabric stars, leaving a 1/4″ painted edge around each one. These will be used as your negative reverse appliques. 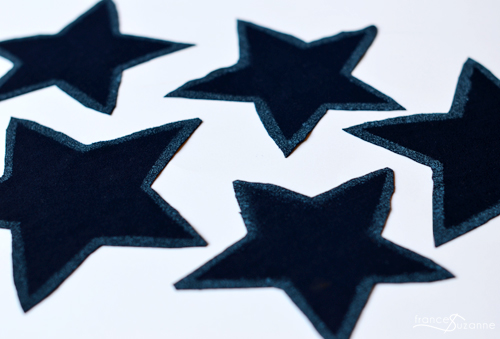 To stitch the negative reverse applique: 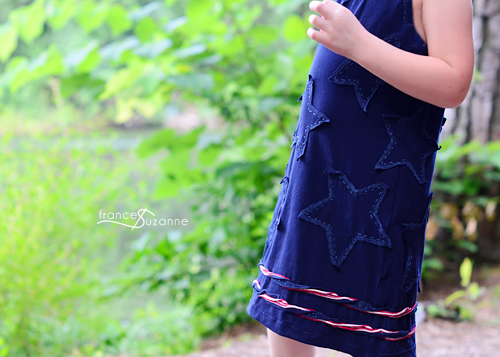 1. Position the cut stars around the sewn tank dress, and hold in place using wonder tape.

2. Stitch the interior of the star, matching your DMC thread to the painted edges, using a straight stitch to hold in place.

3. And there you have “negative reverse applique.” Pretty cool, huh?? 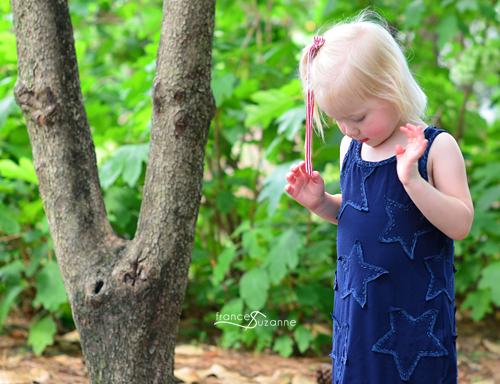 Next up was the Cretan stitch around the armholes and neckband.

To complete the Cretan stitch:

1. Iron the armhole and neckband bias strips in half – lengthwise, with wrong sides together, creating a crease.

2. Sandwich the armholes inside these strips to trap the unfinished edges of the dress.

4. Overlap the edges of each band by 1/2″ {+}, and hold in place with the continued Cretan stitch.

YES…the bias edges remain unfinished {that’s part of the “Alabama Chanin” look…}, but the area closest to the child IS finished – by the fold of the bias.

Finally, we added two folded-stripe appliques at the hemline of the dress. Again, an “Alabama Chanin” technique, and one that adds more texture to the garment.

To make a folded-stripe applique:

1. Cut two varying colors of 1/2″ wide, LONG strips. Natalie, of Alabama Chanin, typically uses two tones of muted, earthy colors. But, again, we veered to make our creation more “child friendly” by including a pop of color on one of the strips.

2. Place strips together – wrong sides facing. Again, we cheated….using wonder tape to hold them together, prior to stitching.

3. Hand stitch, using a straight stitch, the strips around the base of the dress – while randomly folding them back and forth as you go along. Overlap the beginning and ends of the strips by 1/2″ {+} and stitch in place.

You can do as many rows of these as you’d like to create the look you want. We opted for two rows of folded-stripe applique for our ALMOST 3 year old niece.

We really can’t say enough good things about our purchased Alabama Chanin books, and are looking forward to making a trip to The Factory in the near future {it’s too convenient not to}.

Each one of these books is FULL of DOABLE designs, stitching, and texturing techniques and ideas!! Our most difficult task was the design and selection process of this garment. We are indecisive, and there are so many possibilities within these books…that you just can’t go wrong with any of them! Coupled with the fact, Instagram has even more Alabama Chanin inspiration { #alabamachanin } showcased!!

And, although this creation is not our typical / go-to style {Sister Momma might have been rendered “speechless” on this look}, there is sure to be some more “Alabama Chanin” moments before it is all said and done! 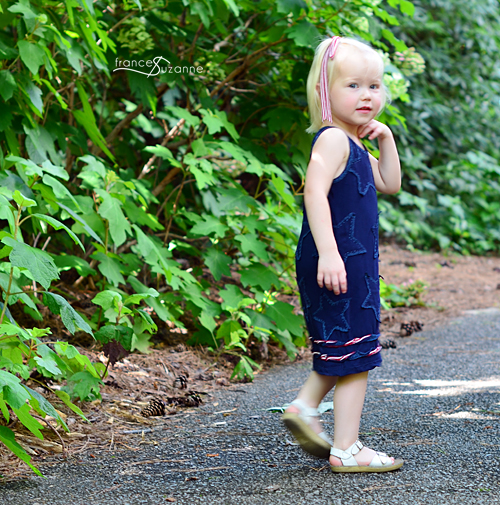 We hope you enjoyed our “30 Days of Sundresses” contribution {as well as entered the giveaway}, and will stick around for our many other sewing adventures in the days to come!


Love it! Thanks for the tutorial on these things. Although it’s not your usual look, it does fit that TEXTURE theme so well.


We are trying to SLOWLY stretch our limits….a bit!


CL is such a darling!
In spite of my aversion to raw edges, I love the texture this method creates! It looks really comfortable to wear too.


The fabric was SUPER comfortable….and made me wish for something in my size!!