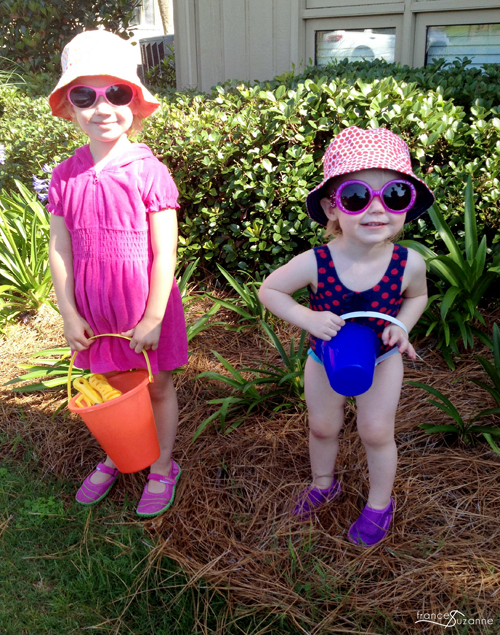 Our fair-skinned nieces NEEDED these beauties….and we NEEDED an excuse to sew from our Oliver + S: Little Things to Sew book yet again.

But, here’s the cool thing…..you don’t have to own the book to sew the Oliver and S, Bucket Hat. NOPE – it is offered as a FREE PATTERN on the Oliver and S site. Hip, hip, hooray for free patterns!! 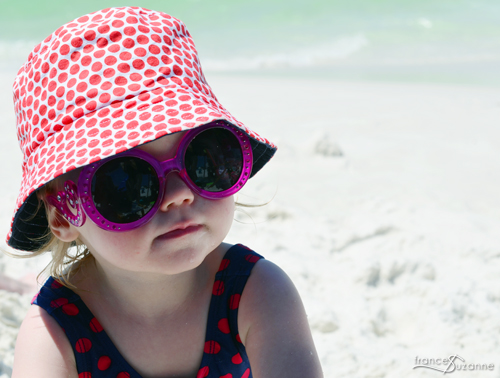 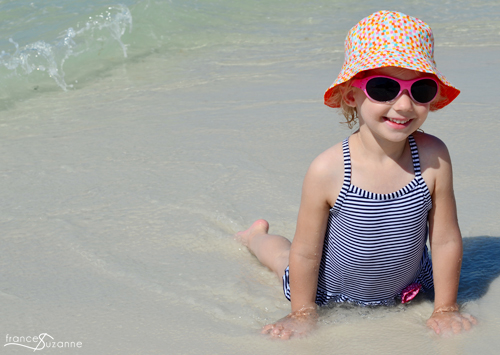 The Bucket Hat Pattern is a perfect way to utilize those smaller fabric pieces…you know, those ones that pile up faster than you can feasibly use them!!

We actually used a fat quarter for one side of CL’s hat! **NOTE: The small size pattern pieces barely fit in a fat quarter, so don’t assume a fat quarter would be large enough for all sizes! 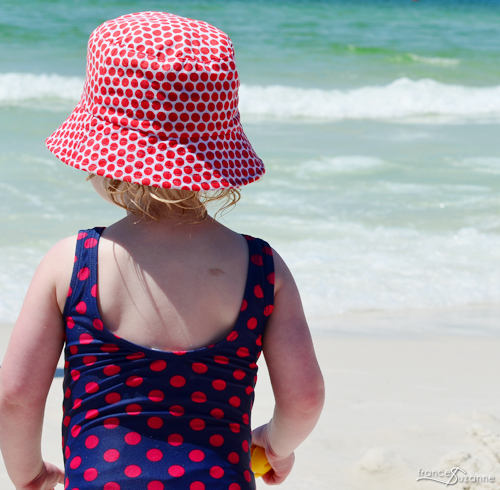 As for the “TRUE TEST of WEARABILITY and COVERAGE?” 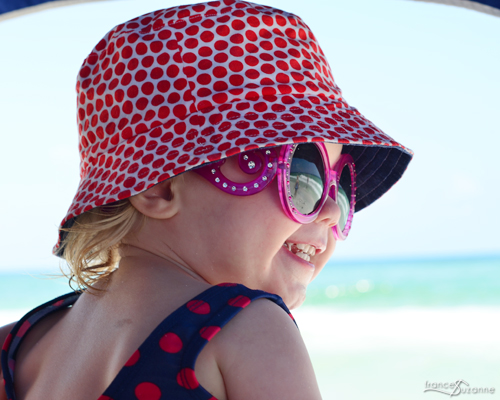 CL wore hers everywhere…and kept it on while out in the sun! 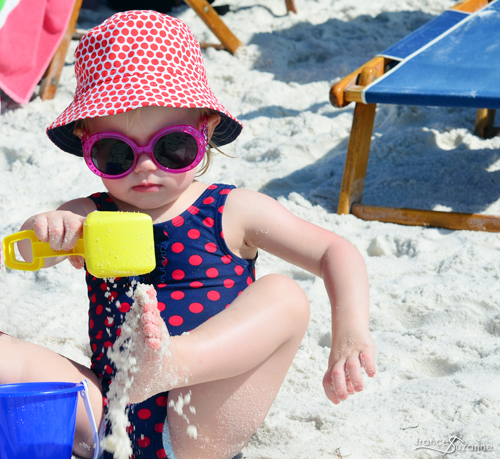 She wore it as she ‘covered her foot with sand’ {although she didn’t understand the concept of burying her foot…she tried}…. 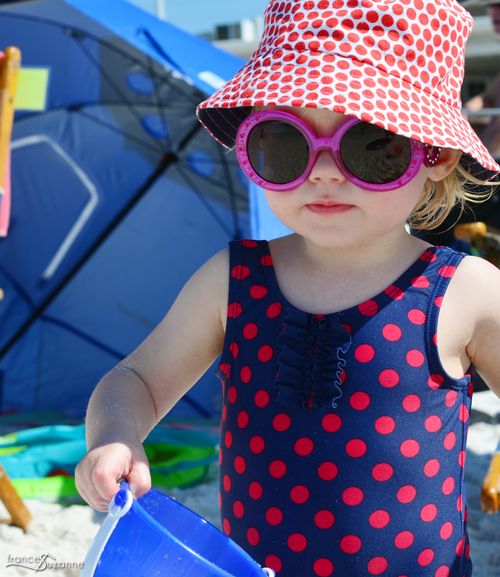 She wore it as she collected more water from the ocean…. 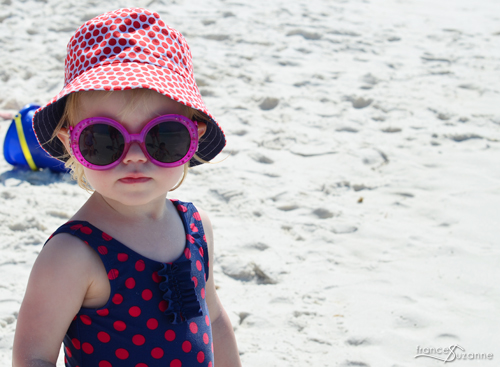 She wore it as she basked in her “larger than life” sunglasses…. 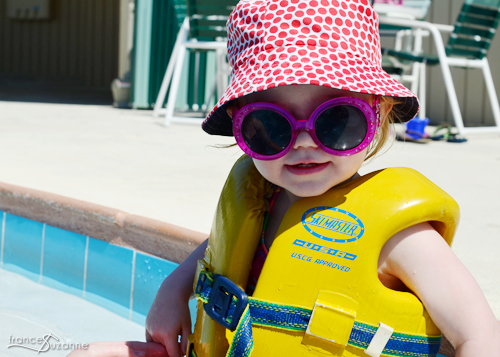 And, she wore it at the pool.

The bucket hat was WONDERFUL for CL…..our fairer of the two nieces. It allowed her to enjoy the great outdoors without the risk / fear of getting too much sun on her fair skin.

After making these bucket hats, we read how Gail {probably actually} added an inch around the brim of the hat for greater coverage. That is definitely something we’ll keep in mind when we make more of these….because, yes…these were a big enough hit that there will be more made!

Now…EA was a more difficult ‘sell’ on the hat. She wore it…..when she was distracted and didn’t think about it being on her head…. 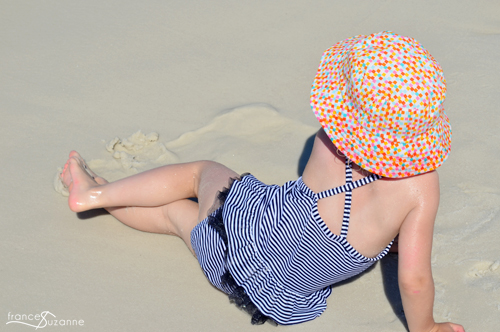 The beach offered a terrific distraction for her to forget about it at times…. 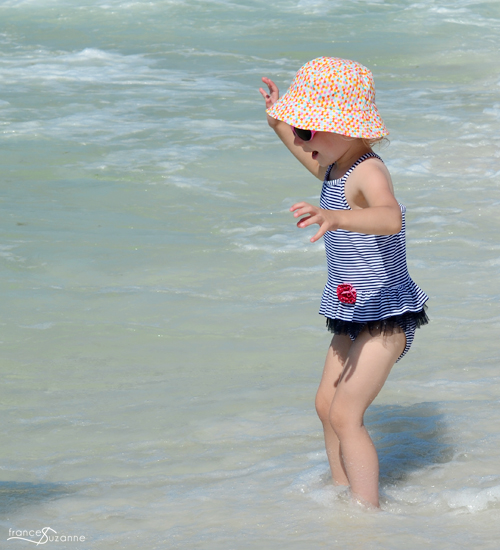 Long enough for us to get a few pictures of her wearing it…. 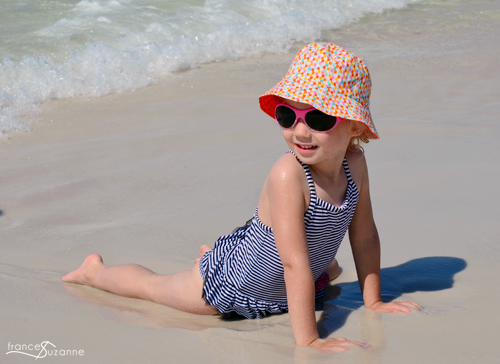 She DID think the reversibility of the hat was really cool….although it stayed on the multi-colored side as she wore it. 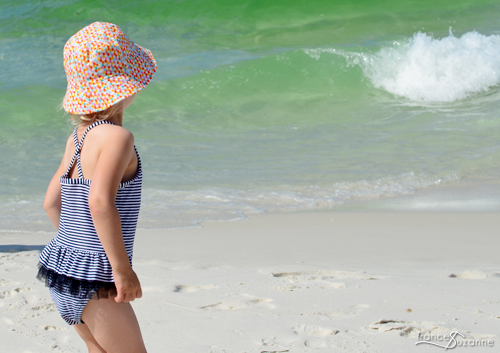 As for her time with it at the pool?? It was used as a toy – to throw in the water and for her to “swim” and retrieve it.

This is such a great free pattern for you to take advantage of as you enter the summer months!!! We love it….and think you will too!!


For a minute when I saw the image on Facebook, I thought did those girls get brave and make swimsuits. Then I read the description and it made more sense. I love the idea of the bucket hat. I might have to sell Boston on one.
With Love,
Scary


No swimsuits yet for us…..You’ll probably hear us screaming / proclaiming it around the globe when that day comes!!


So cute!! These have been on my list for years now!! My youngest has such a big head most baby hats don’t fit him…and he is fair too, so I’d best get on it:) One question…did they stay on fairly well without a chin strap? I think I may add one…


We didn’t have any trouble with the hats falling off….of course, it would depend on where the hat would be worn. On a boat…yes, it would definitely need a chin strap! If we had added a chin strap to CL’s hat {she is almost 2}, I think she would have messed with it / not kept it on. Oooh, I hope you make one and blog about it – we always love to see your creations!


I love these hats! Especially on these girls. =) My daughters refuse to wear hats at all, or I’d be making some. And CL with those sunglasses…. too cute!