A Continuation: Flip this Pattern {!!!}

Patterns first, shall we? Selecting twelve patterns (one per month) was absolutely heart-wrenching! We took into account various seasons, gender-based, cottons vs. knits, and the potential for “flipping”….and when it was all said and done, here is the “Flip this Pattern” line-up for the year.

We combined large companies with small companies; established ones with ones just beginning pattern sales; etsy shops – several PDF patterns, and others with paper patterns only. Many of these patterns we haven’t even sewn before {okay….truth be told: some we don’t own….yet…}. All the patterns, though, hold a common thread – ones we felt had endless possibilities for flipping!
And, WOW, what an amazing response received from these companies!!  Many have provided their feature month’s guest bloggers a complimentary pattern, and are planning some pretty awesome discounts and prizes for YOU during their scheduled month….just saying.
But, wait…..what about the guest bloggers??? Oh, brace yourself…. Are you ready? Sitting down for this?? 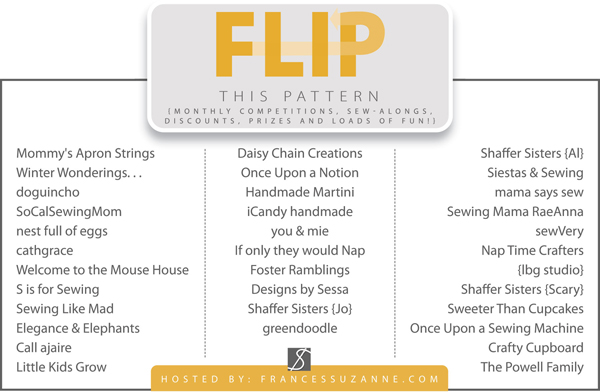 Speechless, huh?? We were too…as the pieces to the series began to fall into place. Phenomenal was the word that kept coming to mind!! These fabulous bloggers are ready to knock your socks off with their ‘flipped’ creations. And, YES – the smack-talking between some has fully commenced!
So, don’t twiddle your thumbs….crank up those sewing machines, and get to sewing!  Heidi’s Bubble Pocket Shorts from E&E Patterns is kicking off the series on June 5. And, yes – there will be some pretty exciting announcements regarding June’s feature pattern in the weeks to come!!

*Please note: creations sewn within the past six months may be linked and contributed to the monthly sew-along linky parties. These do not have to be completed within the month of the feature pattern.


I am so excited to be a part of this series!! Thank you so much for including me among all these fabulous ladies! My mind has been reeling with ideas and my secret Pinterest board is already packed with inspiration 😉 Can’t wait to see what everyone comes up with!


We’re so glad the excitement is contagious!!! This is going to be so much fun!


How fun! I will definately be palying along!


So exciting! I cannot wait to watch this Series unfold.


We can’t either…..you better put those flipped bubble pocket shorts of yours in the sew-along :)!


We’re excited for all the great sewing inspiration!


Sounds fantastic! I have many of these patterns so will be very keen to see the creations.


Great!! And jump in and sew along with everyone too :)!


This is great! I have enjoyed this series very much!!


This made our day!! So glad you are enjoying the series…..we’ve still got a few more months left!!


[…] garments from established patterns is our “specialty.” We actually started a series, Flip this Pattern, in an effort to help us see the hidden potential of some already fantastic patterns {check the […]


[…] we kicked off the one year anniversary of our blog in June, we began the “Flip this Pattern” series – a series designed for YOU to showcase your creations, based from one […]


[…] something there for everyone! So, of course, we had to include such a site in our year-long “Flip this Pattern” series. The hard part? Deciding which pattern to choose, of course!  After deliberation, we […]


[…] July 3rd}. And, now it is time to “meet the competitors” for this month! The July “Flip this Pattern” competitors have been chomping at the bit to show you their “Flipped Creations”….and they are […]


[…] a sense of camaraderie and friendship through it all! We actually laughed out loud when a future “Flip this Pattern” competitor agreed to compete, yet cited the fact she wouldn’t be driving up our blog traffic, etc. […]


[…] And, now it is time to “meet the competitors” for this month! The three September “Flip this Pattern” competitors have been chomping at the bit to show you their “Flipped Creations”….and they are […]