Since EA’s first Valentines Day, we have tried to have a little party – celebrating the holiday, while giving our sister and husband a bit of reprieve. Truth be told, our sister has stuck around to join in the fun more often than not.

However, for this year {our 4th year of the tradition — unfortunately skipping last year due to family illness} we “kidnapped” two of the three nieces for a “spend the night” Valentines Party. We hope the party was sufficient for EA – only lasting two nights, instead of her self-planned “4 night event” {where does she come up with this stuff??}.

We try to make each Valentines Party unique and special for the girls. Due to sickness this year, ours had been postponed…and when it was all said and done, it came with a big bonus: SNOW!! That’s right!! SNOW….in the south. And, LOTS of it. 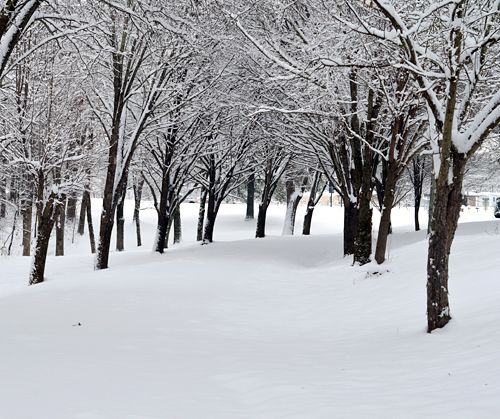 EIGHT INCHES measured at our house. NOTHING measured at the nieces’ house {an hour south of us}. We waited until “Day 3″ of the event, and then picked up two very excited little girls to enjoy this historic event. 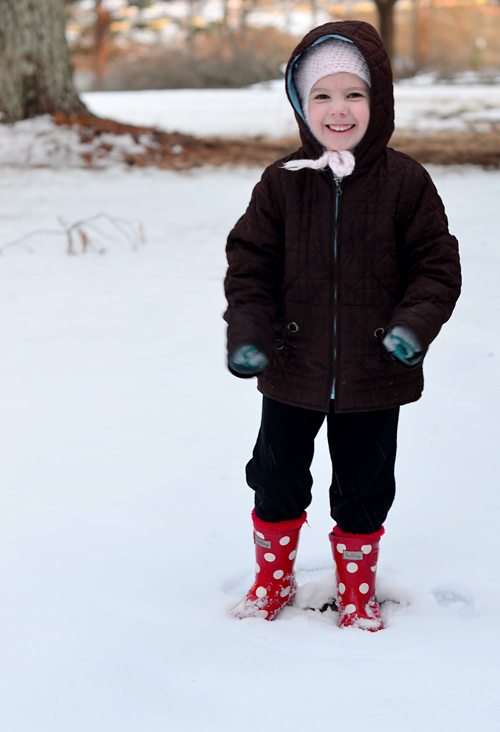 Although it was day 3 and 4 of the snow event, there was still plenty of it for sledding, snow angels, and snowball fights!  Technically, we could have built a snowman….but we didn’t draw too much attention to that fact! 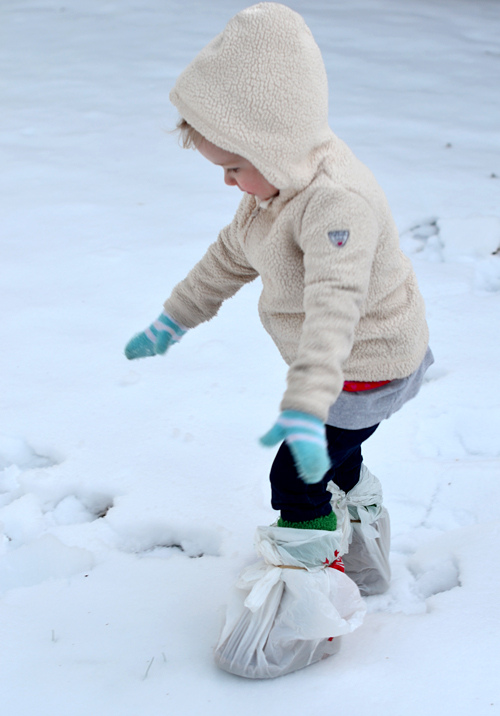 And, yes, in the south….waterproofing involves covering shoes with bags!! 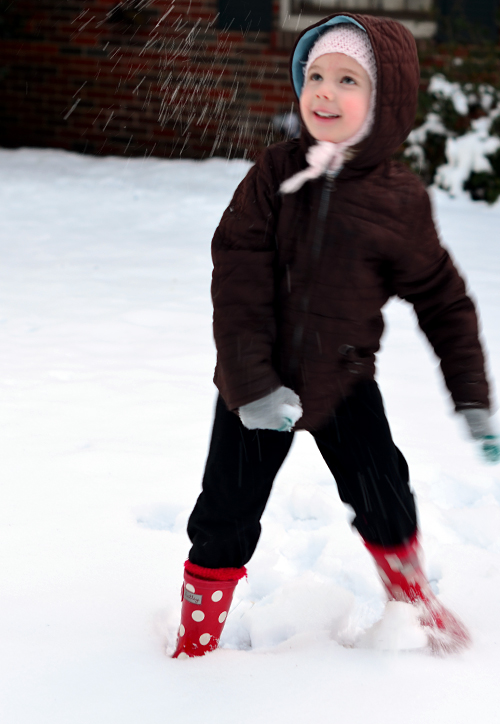 We sledded until nightfall, and tucked them into bed dreaming of more fun in the morning. 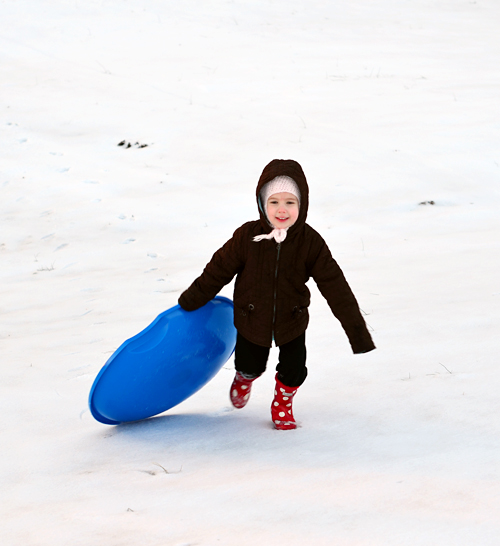 Now, EA isn’t a morning person AT ALL! But, when she got up about an hour earlier than her usual time and stated,  “Will we get to sled again today?”, we knew we had a “winning party!” 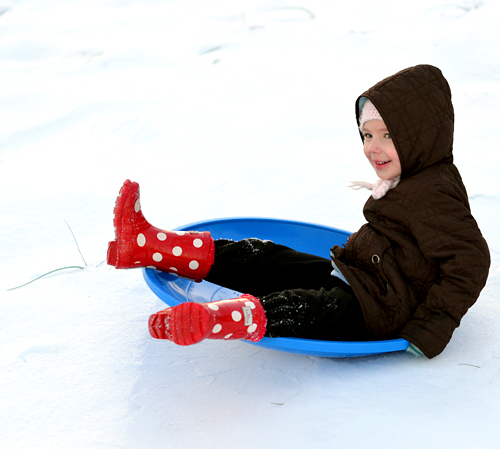 Thankfully, on the 2nd day, we not only sledded but also found the perfect snow for snow angels and snowball fights. 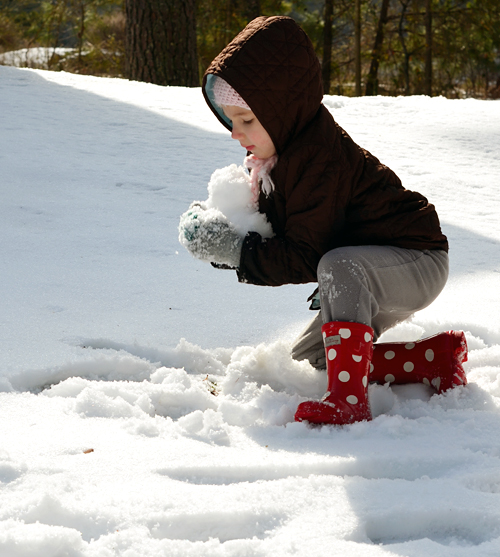 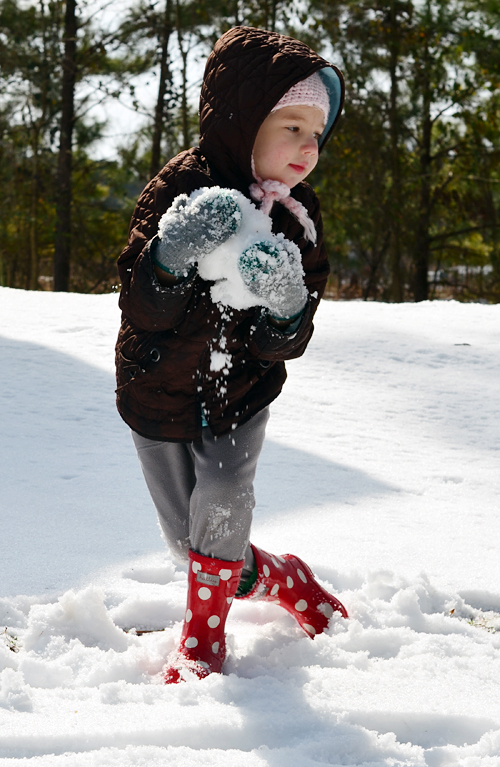 The snowball fight was epic!! 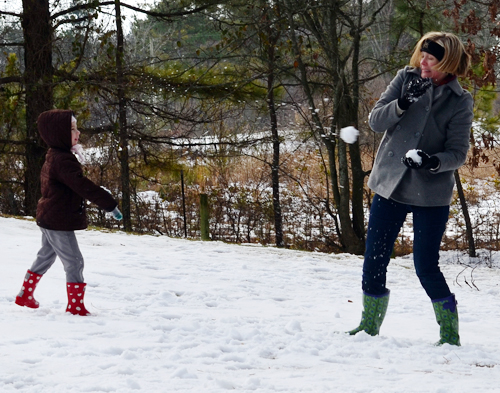 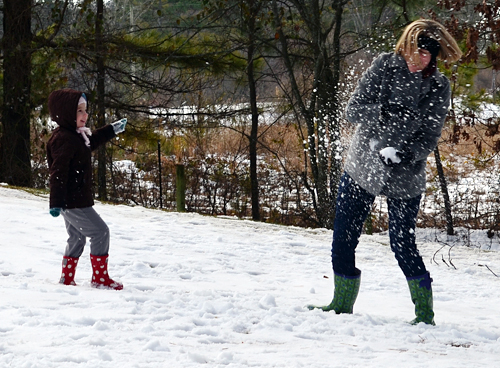 Where the children were the champions, and the aunt took the beating – all in the name of fun!! 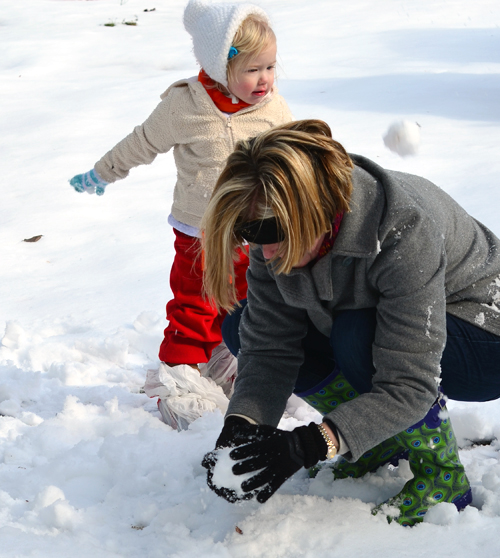 CL wasn’t a big fan of the snow. Maybe it was the size of the hill we pushed her down initially….or, just the cold in general….but she would adamantly tell anyone that would listen that she didn’t like it. 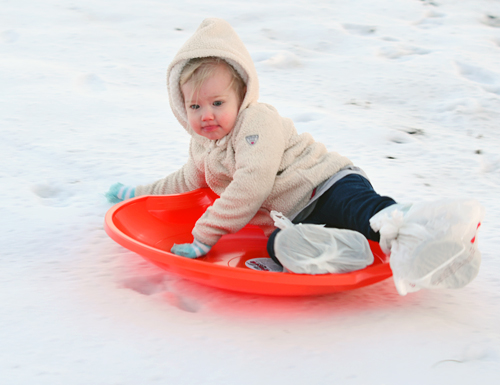 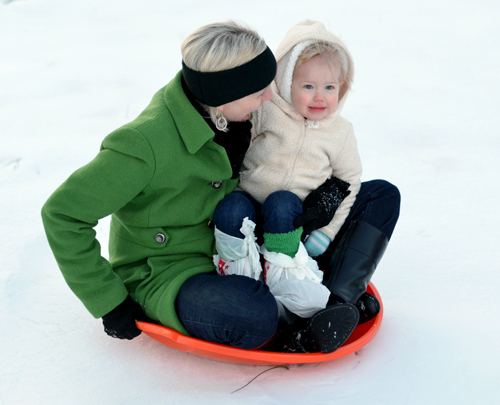 Still, when we bundled up for the second day of fun outside and were heading out the door, she came running down the hall shouting, “wait for me…wait for me…!” The second day was better for her – she liked swinging in the snow, wiping off her slide, and participating in a fun snowball fight. 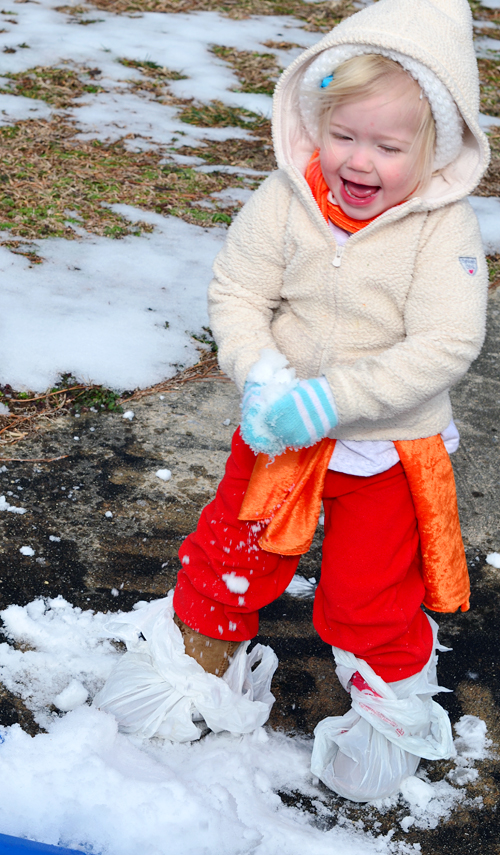 While the other festivities might have paled in comparison to the snow, we did them nonetheless. 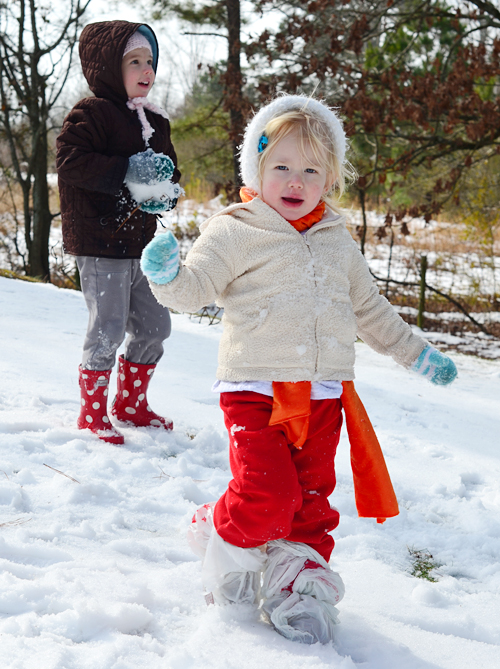 Breakfast was buttered cinnamon tortilla hearts – definitely a favorite of both girls! 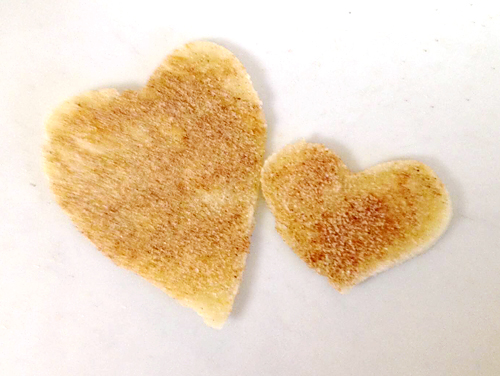 Then, we had prepared a goody bag for each of the girls containing an Oliver + S coloring / design book, PEZ candy, post-it notes, and a recycled stuffed animal. 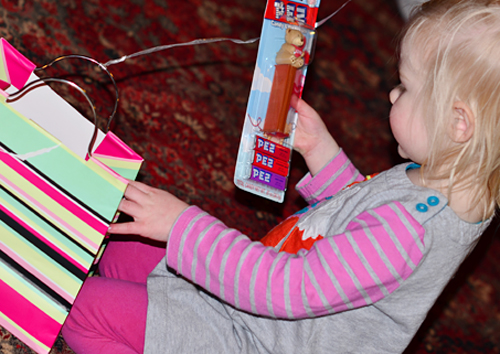 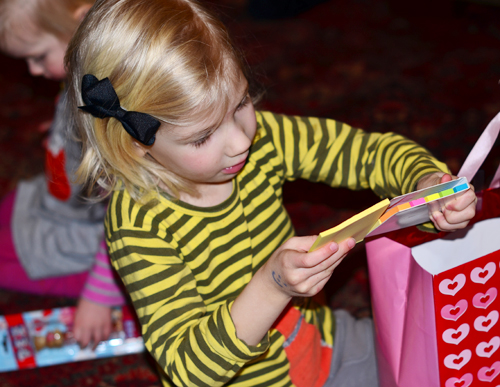 Hmmmm, one pack of PEZ lasted 10 minutes tops, and both girls enjoyed designing and coloring some special outfits in the Oliver + S book. EA was very specific in her design – she honed in the Fairy Tale Dress {a pattern we don’t even own – insert audible gasp HERE!}, and added purple flowers, rainbow stripes, and solid pink in the back. 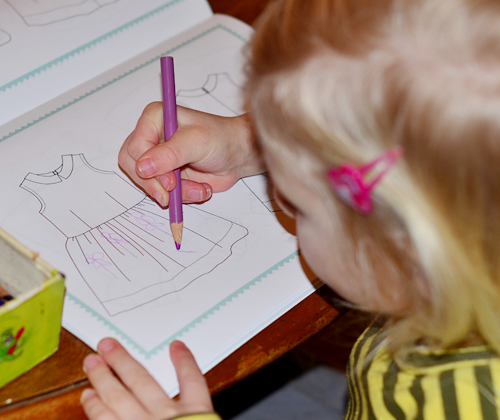 CL, on the other hand, was very focused on buttons, ties, and the smaller details. It was amazing how she went for the intricate details, instead of the bigger picture. 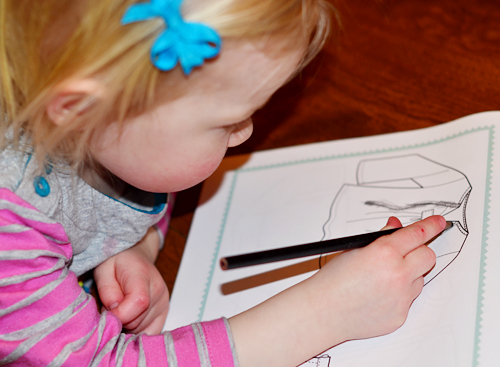 As for the success of the party…who could ask for more???

Well, we had a final surprise up our sleeves that involved an excursion….and “textured attire” for the girls!! But, that is for another post…another day.


What fun! I’m so glad the girls were able to visit with you and play in the snow. Memories that will definitely last a lifetime for all.


Looks like so much fun! Such special memories! There were so few snow days in my life growing up in the south, so I can remember all 3 of them very well!


Good to see that you ladies are still up to enjoying two active nieces, and one in the wings. The snow is amazing for so far south. I gather the Hudson River has been frozen, recently.

Wishing you all the very best for 2015, and clearly (!!!), you will have buy the fairytale dress. Between us, I’m not a mad fan of it – very influenced by zippers, and fitting issues.