When the Child Decides… {Kid’s Choice}

We did it. We took Heidi’s {Elegance and Elephants} challenge: 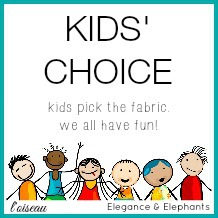 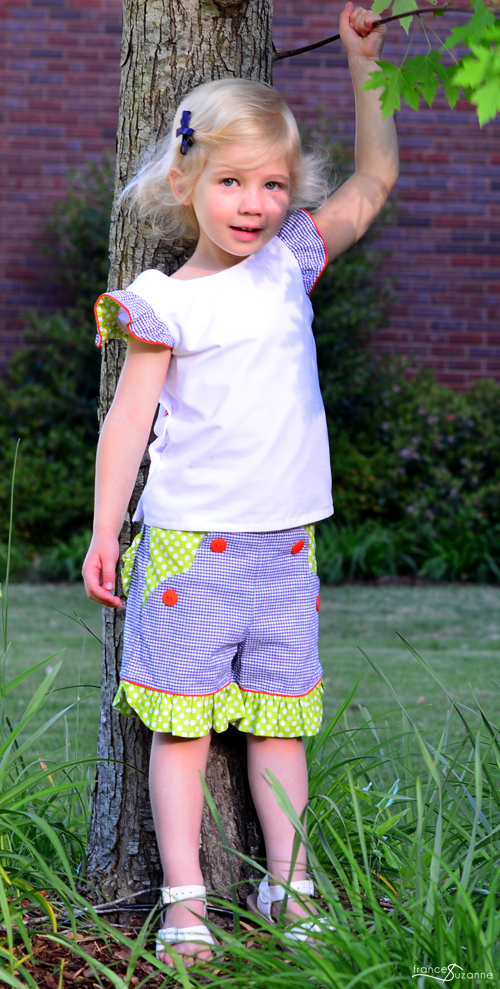 So….our niece might have been on the young side of this challenge, but when it was all said and done, we were so glad to have taken the challenge {and even gave our niece an A+ in her sense of style}.

We began with asking her what she would like sewn for her: a dress, shorts, or a skirt. She chose shorts…

Then, she received three options for shorts…..and selected the Cottage Mama‘s {Sew Classic Clothes for Girls} Vintage Ruffle Capris and Shorts. We were ecstatic….and were anxious to sew a creation from this book!! 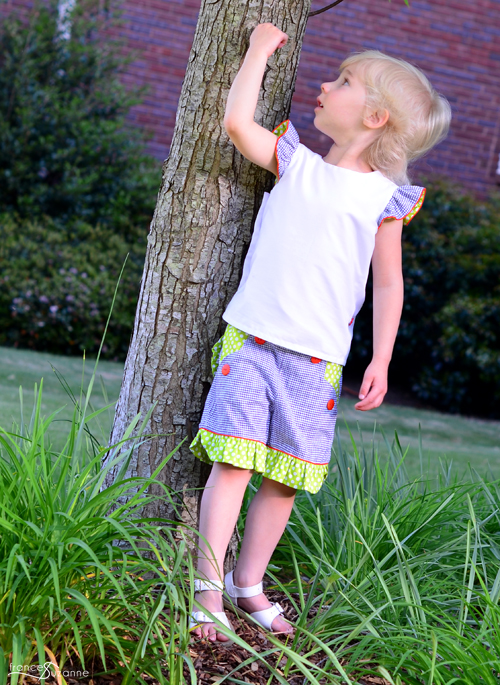 **Please note, the 3 year old floundered a bit before deciding. Something about orange boy shorts on the cover of another pattern “spoke to her” for a while.  “Sister Mama” said she had been all about orange recently….

Before heading to the fabric store, EA emphatically said she wanted polka dot shorts. **We thought we would be doing good to get out of a fabric store with polka dots, especially when she saw all of the other fabric available. 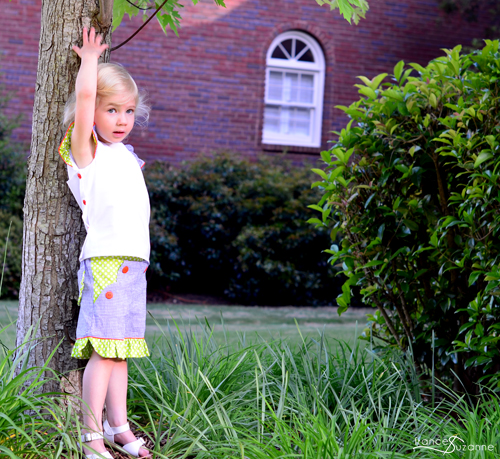 EA had never been fabric shopping before, so everything was new and different. She was able to use good reasoning skills and NOT choose the Christmas, Halloween, or Valentine fabrics for her shorts…..wrinkling her nose at the silliness of that prospect! 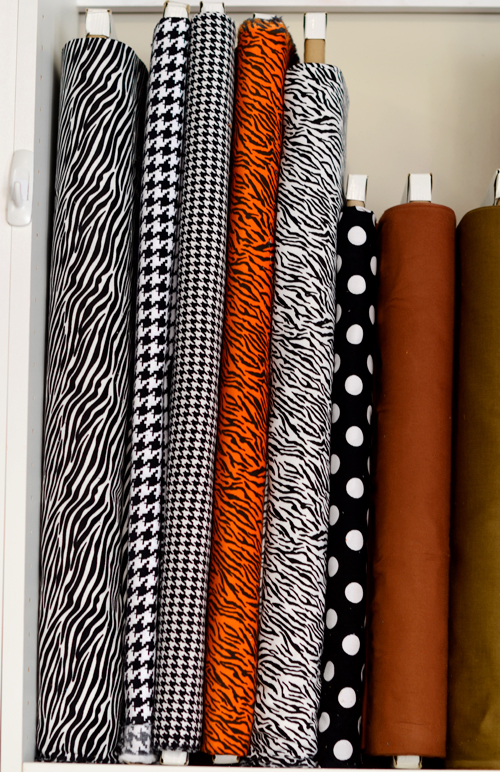 The child stopped dead in her tracks, looking at the top shelf. We seriously thought she was going to drool!! “LOOK….ZEBRA FABRIC” was all she could get out, as she planted herself underneath the shelf!! After inspecting THE fabric a bit further, we realized it was corduroy….and “out” for summer in the south! Whew….that was a close call :)…. 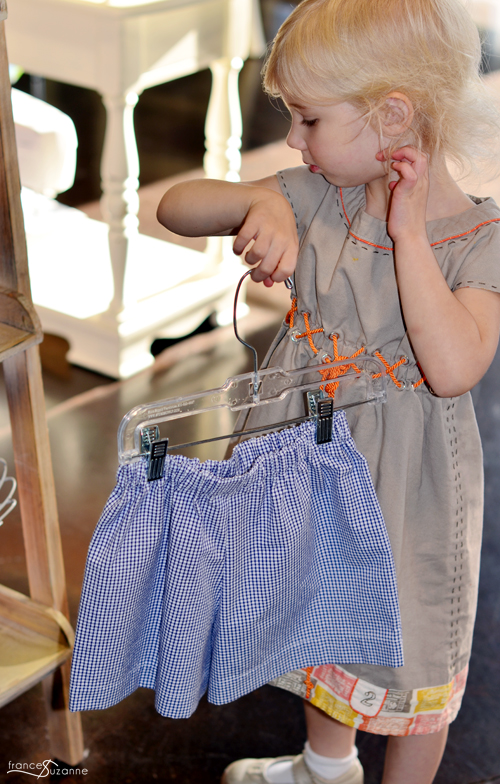 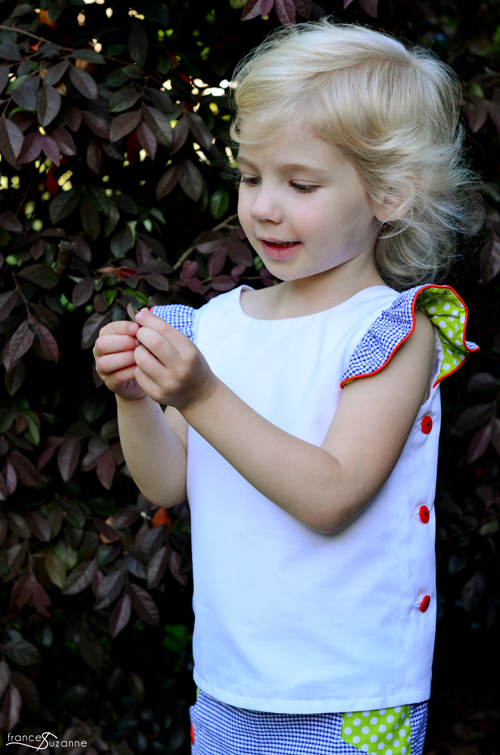 We asked what color she would like to use with the navy gingham seersucker fabric. She stated green….so we quickly grabbed two choices of green fabrics for her to choose from {one with triangles, one with….you guessed it – polka dots}. She chose the dots! 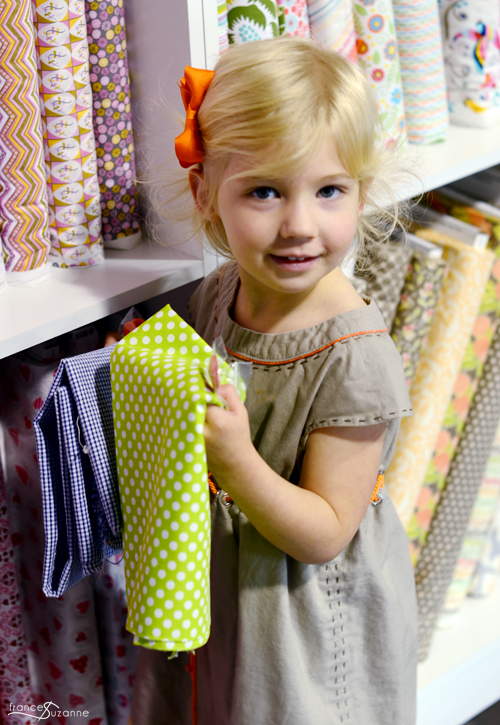 As for the buttons? She said yellow or orange would look good. So, we laid both of the button options on the navy gingham seersucker fabric, and she chose orange. That’s when we had to use a little artistic expression by utilizing orange in areas other than just the buttons, with none other than a little piping!! Of course… 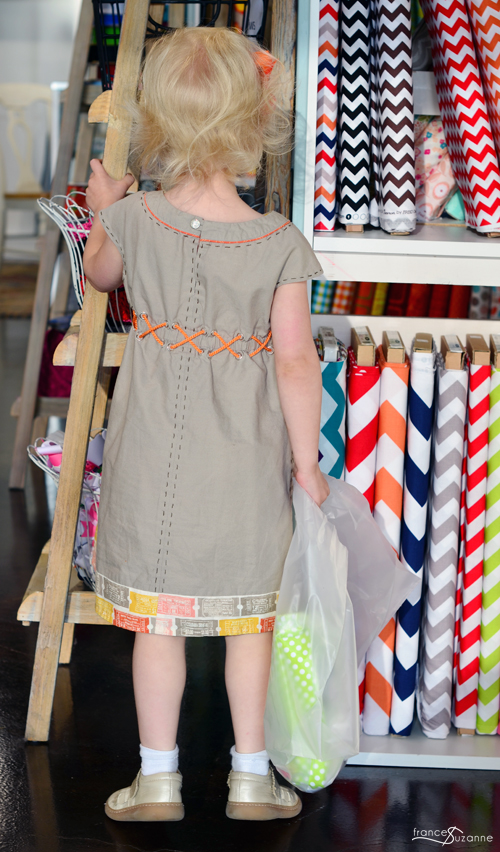 What was EA’s favorite part of the garment {besides having the power of design}? 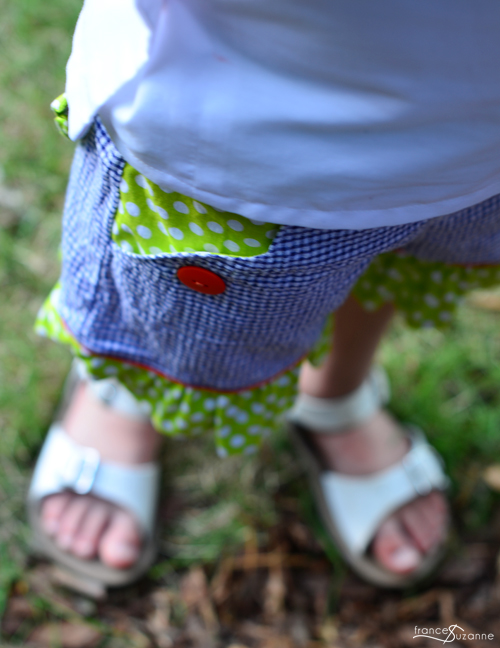 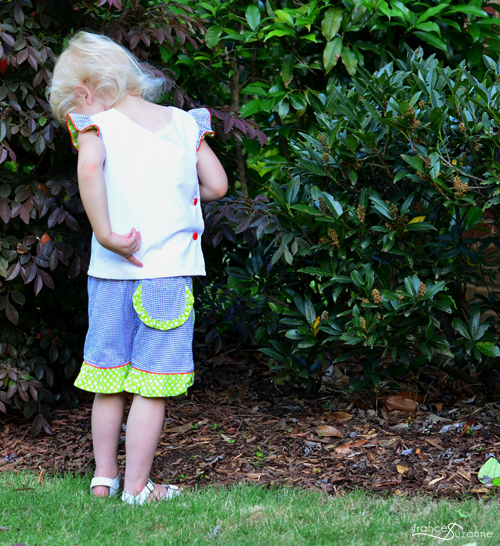 We paired the shorts with An’s {Straight Grain} Hanami Top – another pattern we hadn’t sewn yet. 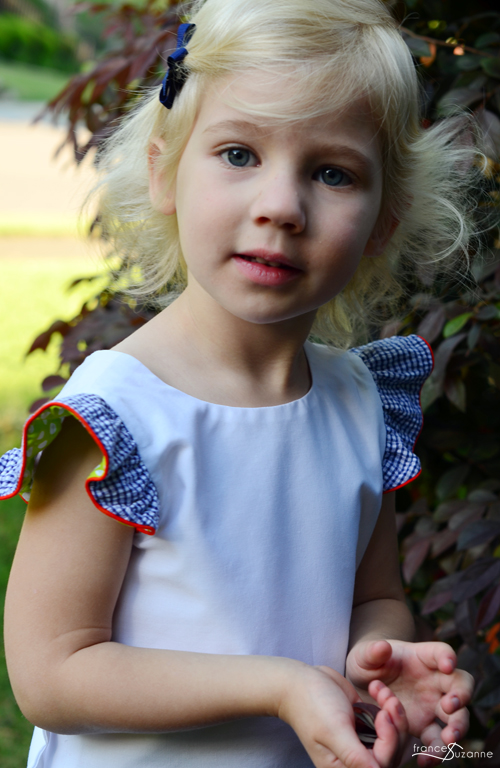 We lengthened the top, and omitted the peplum…..but forgot to take into account we’d need a few extra buttons! “Sister Mama” saved us in that snafu and and some waiting for us when we arrived for pictures. 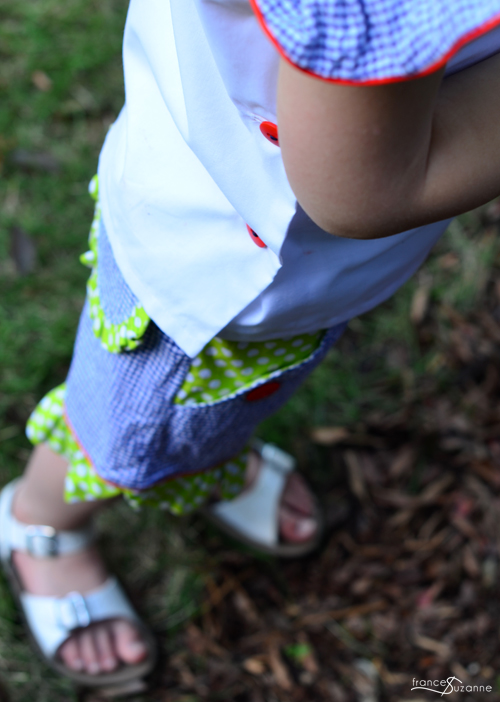 Finally, we added that touch of orange piping around the sleeve hem…LOVE IT!! 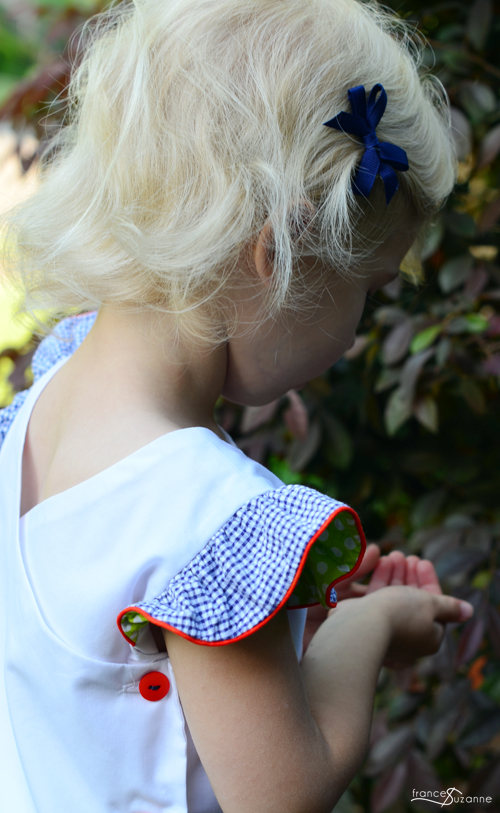 That, and the contrasting fabric used as lining. It created such a fun look on the sleeve area! This past week, Rachel {Stitched Together} had a tutorial for adding piping on sleeves over at Oliver and S.  While our addition was to a lined sleeve, she showed how to create a piped sleeve hem on an unlined pattern piece. 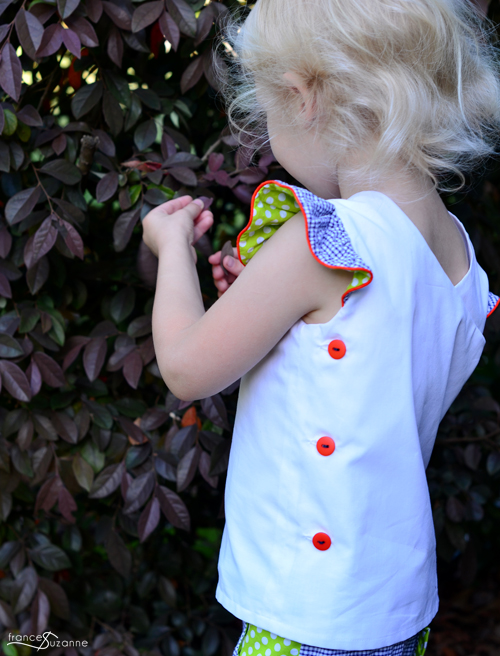 Thank you, Heidi, for challenging us to give our niece “a choice” in her wardrobe! We made some sweet memories, and someone is loving her latest handmade addition for the summer months ahead! *Doesn’t it look like she is already scheming for her next fabric trip?? 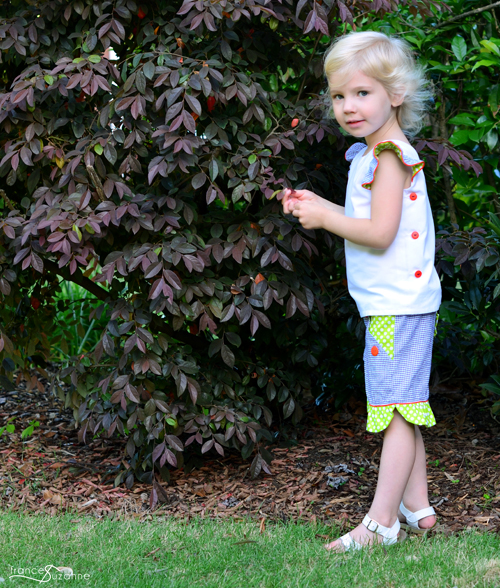 
This was so fun to read!! And I absolutely adore how the outfit turned out, Ashley and Emily! I’d love for her to go fabric shopping with my girl. I think they’d have a blast!


Gingham and polka dots are simply perfect for a child in the South in summer. EA did a terrific job of picking and pairing those fabrics, and I love how the orange makes it all pop! And seeing that zebra print reminds me of my post today. You should check it out!


We’d like to think it was a little nod to AU….subtly!! YES – we can see how the zebra print reference reminded you of your post…. :).


I love the color and pattern combo! She did a great job! And she looks so old in those pictures!


Thanks Sally! Shhhhhhh, don’t talk about her growing up!


What a great job Miss EA did! Her outfit is beyond sweet and obviously “her”. My grandson isn’t old enough yet for fabric shopping,,but I’m looking forward to the day he is. I sewed for my own kids when they were little, and they always chose their own fabric for their summer shorts. (Scraps of Elvis fabrics still show up in my scrappy quilts leftover from Mr. Z’s days of choosing!)


Thanks, Mary!! We had NO IDEA where this experience might lead….but thought she did remarkably well :). Our ‘zebra days’ may be in the near future though!!


What a darling little girl! It turned out lovely… she chose well. =) I love the piping in the sleeves and those buttons on the sides of the top.


Thanks Charity! We plan to pipe more flutter sleeves in our near future :)….Love the look of them!


I love the contrast with the orange buttons and piping! She chose well! And I love your Hanami top – I have the pattern for some time now and I haven’t sewn it yet… It is so lovely!


Thanks, Sara!! We had been holding on to our Hanami pattern as well, but are so glad we chose to pair it with EA’s shorts….


What an adorable outfit. I think she did really well. Recognized the store from the pictures. Let me know when you are in town next time!


I BET you recognized it….yes, we should get together sometime we are down that way!!


I love how the outfit turned out! Would you share the pattern for the dress your niece is wearing during the shopping trip? It’s lovely! Thanks


Absolutely! It is the Oliver and S, Roller Skate Dress {modified}. If you want to read more about it, we blogged about it here: http://www.francessuzanne.com/2013/07/lets-roller-skate-july-flip-this.html


I love this outfit so much! Your niece has great taste in selecting and combining fabrics

I just love the fabric and piping combo in the flutter sleeves! Thank you for using my pattern. an xo


How fun! I love that the sleeves of the top are lined with the polka dots too.


What fun!! I really should do this with J and see what she comes up with!