PR&P: A Look Behind the Scenes {Week Four: Signature Style}

Wow…the “Signature Styles” have been released, and some pretty intense voting has commenced {and will continue for the next 36 hours}. That said, we’d like to thank each and everyone of you for taking the time to vote…and reminding those that haven’t voted to do so before Thursday evening at 9:00 PM CST. 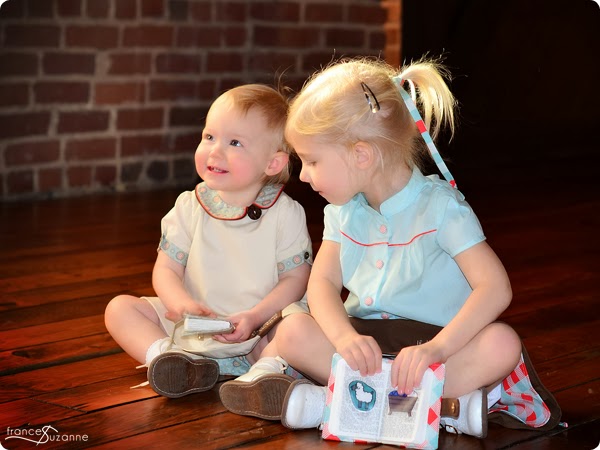 What a difference a week makes!! 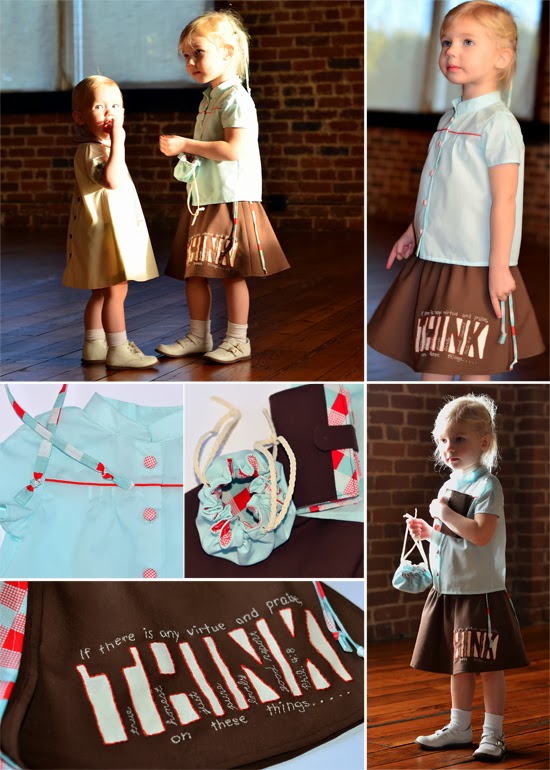 Between a three day delay for photos by a SURPRISE snow event and traveling nightmare {think: 8.5 hours stuck on the interstate with a three year old…bless the other grandparents’ hearts!}, to an extremely mobile 19 month old…..these girls’ made us work for a picture of the two of them together…. 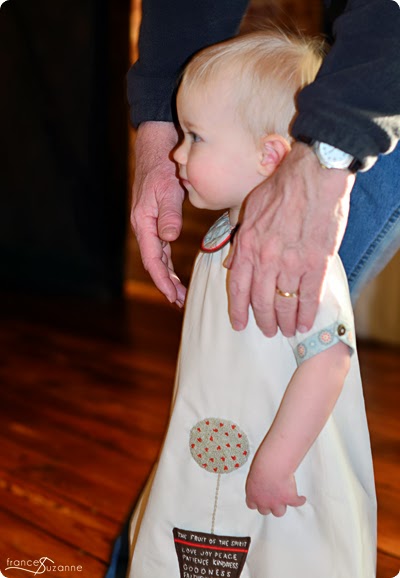 So, we fed them ……LOTS.
Marshmallows, raisins, and popcorn gave us just enough time to snap a few pictures! 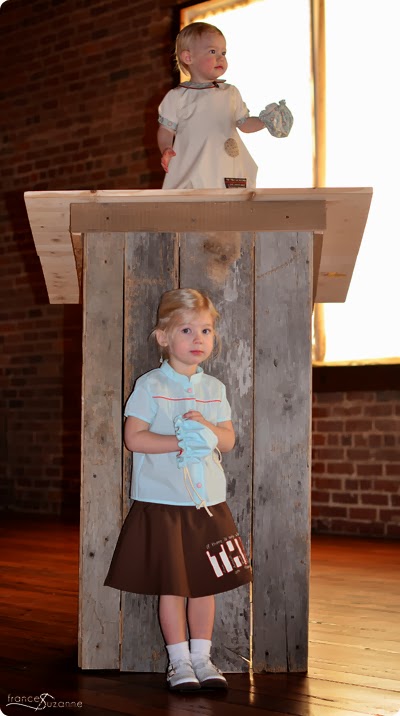 “Ground Forces” {aka: Grandmomma and Grandaddy} were called in, as noted in this picture of EA, CL, and Grandaddy. Yes…he is quite hidden away, holding CL above the podium.
Hey…it kept her still!! For a moment…. 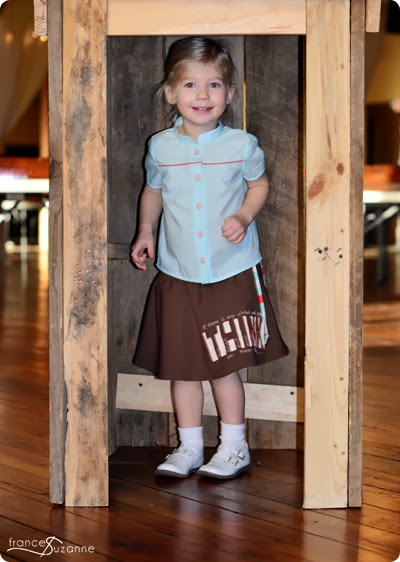 Now, for the record: EA couldn’t have been better! And, she is typically the spunky one….
so we counted our blessings on that. 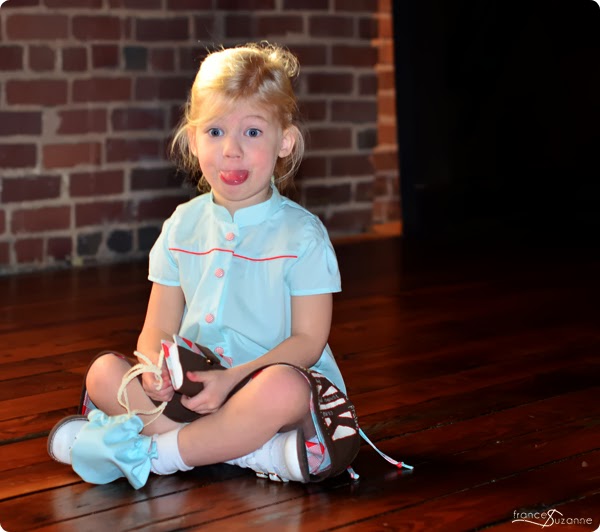 Still, she humored herself at some point in the shoot, and completely cracked herself up after doing it. We didn’t think it best to encourage the situation, so didn’t take a picture of her continued antics for the following few minutes… 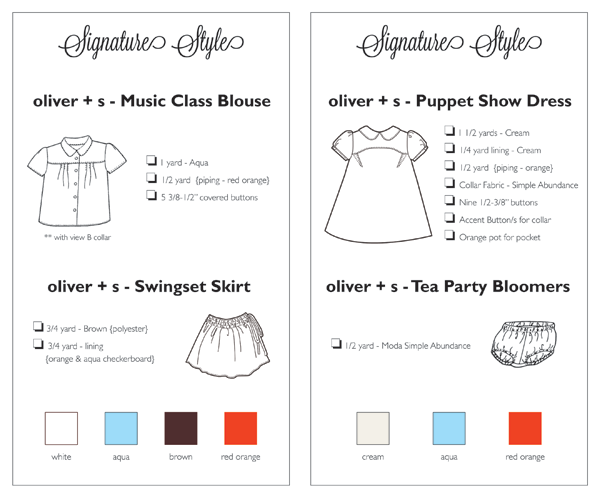 As for the questions we mentioned addressing in our previous post??
What fabric did we “build” this entire look from, why was it almost scrapped,
and who pulled us through the “situation”?? 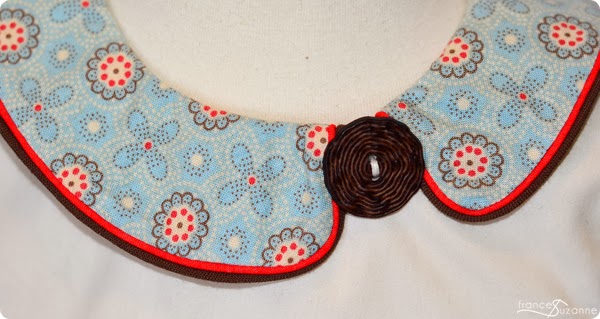 Simple Abundance by Thimble Blossoms for Moda.
We found 2 fat quarters while PR&P shopping, and snatched them up immediately ….thinking that ordering more wouldn’t be an issue! Well, we couldn’t have been further from wrong! After extensive searching online, we only came up with ordering through ZAMBIA. There were lots of problems with that scenario, so we panicked. Although we thought we could eeeek out enough for CL’s bloomers, the collar/cuffs/accessories were definitely in limbo. 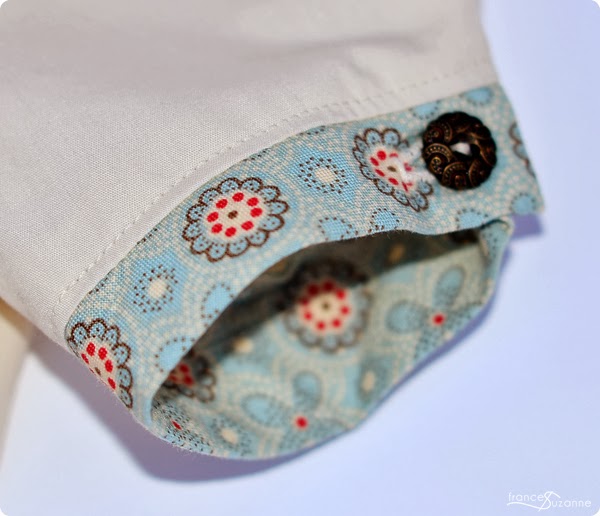 ENTER: Our first social media ASSISTANCE to pull together this look….INSTAGRAM!
We brainstormed, and turned to our “Quilting Friend” – Jennifer, of Ellison Lane {and the very popular, Sew South Retreat}….and real-life friend through the GNO: Charlotte event, hosted by Jess, of the Sewing Rabbit.
Our email to Jennifer went something like this: “HELP!! We know this is a long shot, but do you happen to have this fabric in your quilting stash that we could buy?? Or, do you know any quilting friends that might have it in theirs?” 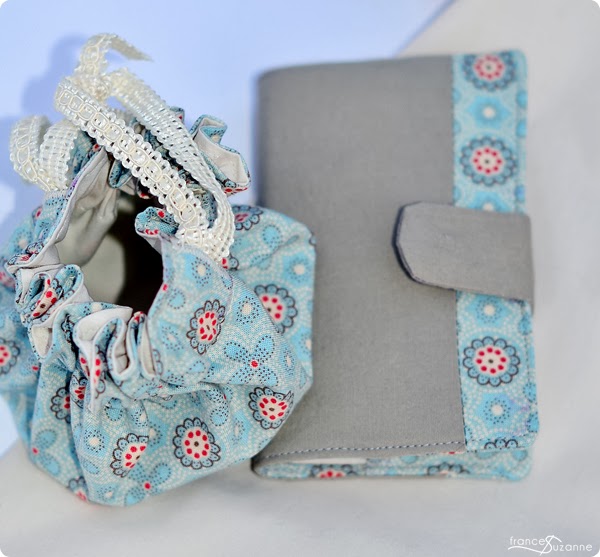 Jennifer then sent the request via Instagram….and it was AAHHHHHMAZING! Seriously, it was awesome to watch. Many of her friends found some in their stash and were willing to part with it, and then someone hashtagged the designer of the fabric. Okay, we were kind of star struck. No…we were star struck! Camille of Thimble Blossoms couldn’t have been any sweeter. She found some in her stash, we bought a couple of yards from her….and were good to go. You don’t know how much we wanted to make it to this round just to show the power of networking!! It was fantastic!
What part of the outfit was made four times before being satisfied with the outcome?
That would be the sleeves…but more specifically, the cuffs.
First, the fussy-cut didn’t get the area we wanted it to…

Then, one cuff was cut on the bias, and the other one wasn’t…which led to a different design…
{*note photo above…see the difference?}
Finally, before attaching them, we realized one of the sleeves was made using a different cream. REALLY?!?!? Back to the cutting table…
What was our one Christmas gift request this year?
How was it utilized {or not utilized} through this look? 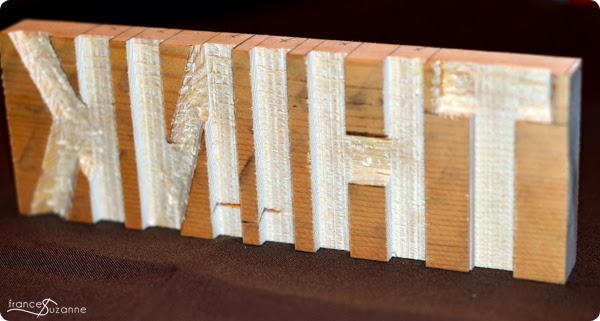 We wanted a wood-carved THINK stamp…thinking that would be the way to go for the reverse painted area. Our dad granted our Christmas wish {after Ashley made the computerized graphic of what we wanted}, and did a marvelous job creating our vision. However, when it was all said and done, we didn’t even use it. The stamped version lacked the clarity we were going for….so we went the freezer paper / stencil route instead…. 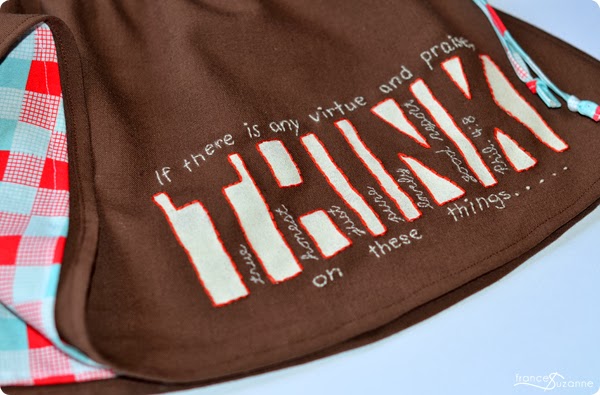 What 2013 Sewing ReSEWlution was attempted, and did we meet with success?
That would be drafting a Peter pan collar, and yes…we were tickled with the result!! It actually lined up on the back placket area, and fell in the asymmetrical area we had envisioned. SCORE! 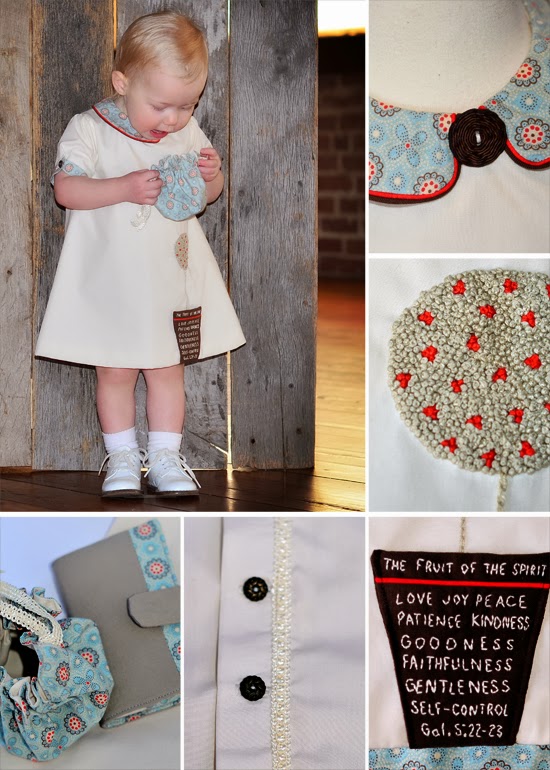 What part of our “Signature Style” do we claim “Beginner’s Luck” in creating?
Our self-drafted Bible covers…..most of the time it takes us a few, ummmm….practice rounds to get it right…..but this time, everything fell into place. All the way down to our SECOND ‘social media’ assistance: youtube. We had never installed a magnetized snap, so we turned to the youtube experts to assist us. It was just like the packaging, but our ‘visual learning’ kicked in on this step… 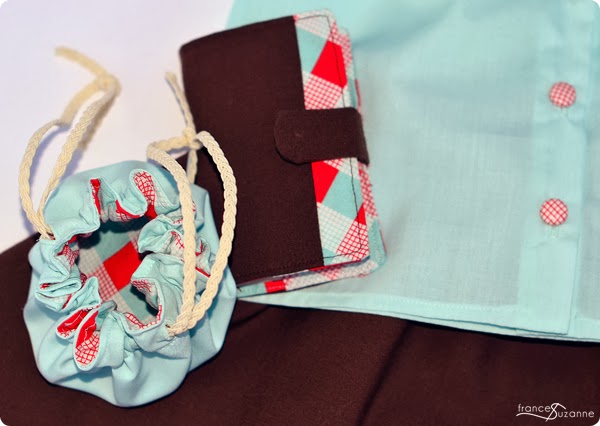 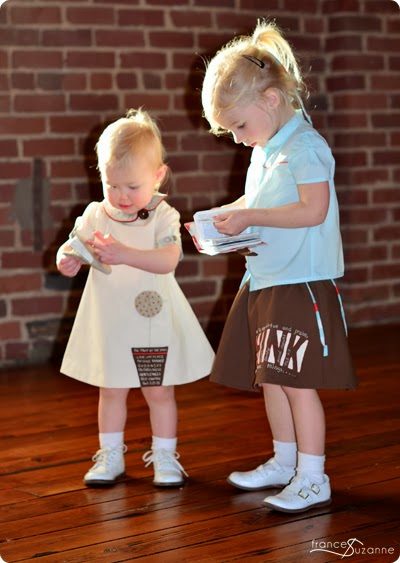 How did THREE TYPES of social media assist us in completing this look?
Well, it has been mentioned how instagram and you tube assisted us in this look….and now we’ll throw in Pinterest for good measure!! This photo was pinned approximately a year ago, on a board we created for our sister to add favorite pins as inspiration.  And, that friends, is where it all began. Well, that…and after finishing the “Fruit of the Spirit” church curriculum with our 4 and 5 year old Bible class… 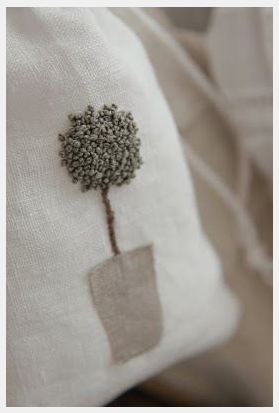 source: http://moderncountry.blogspot.com/
We’ll be doing one FINAL round-up post about our Project Run and Play experience later in the week…. 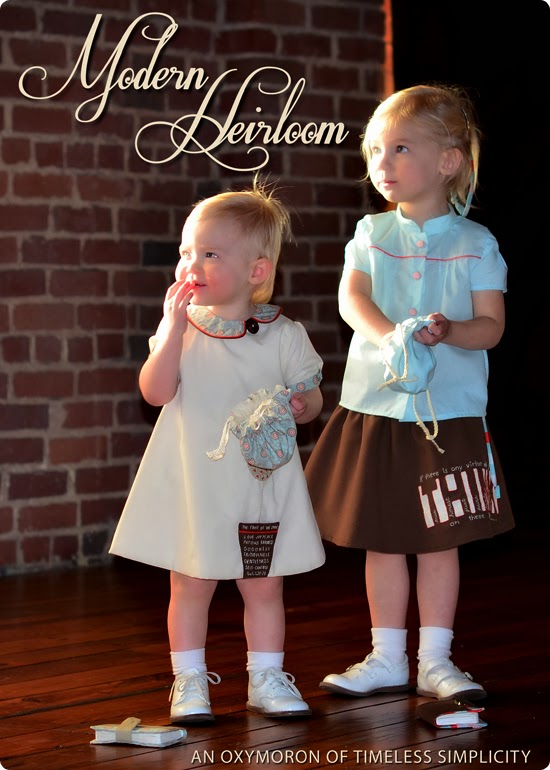 with some general thoughts, reflections of our time as competitors, ways we pushed ourselves through the challenges, as well as many, many thanks to all of you!!! 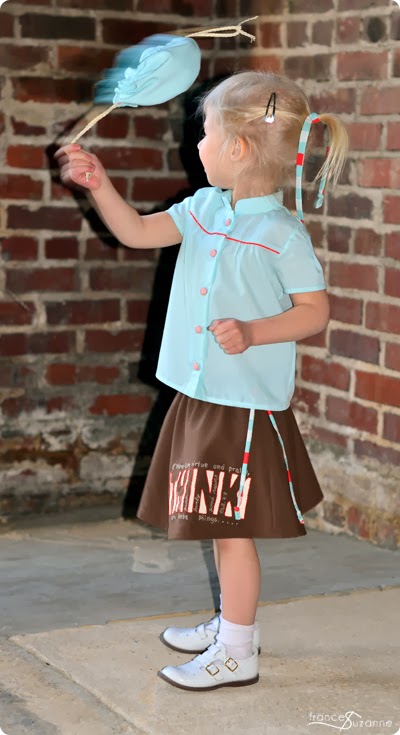 Hope to ‘see’ you then….**and she’s off {please note: this was the way the entire final photo shoot “went down” — LOVE EA’s exasperated look over CL being on the move yet again…}. 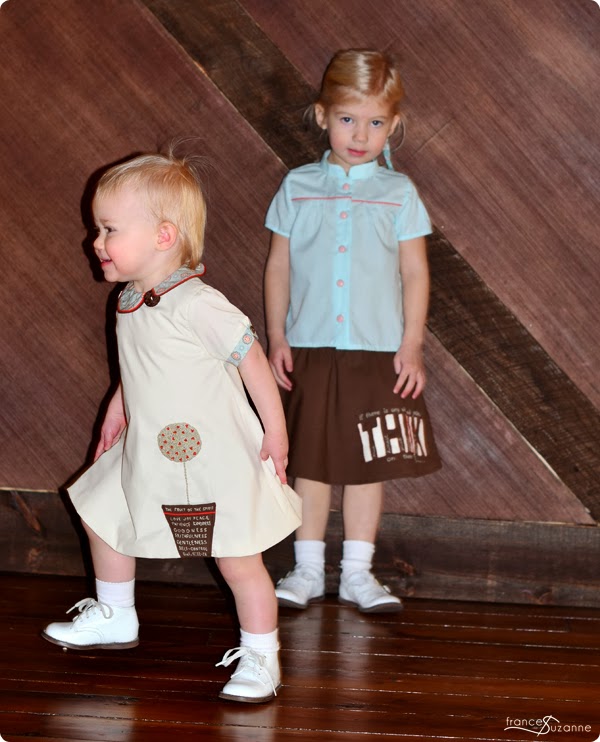 
Very beautiful pieces you both sewed up! I LOVE that you focused on The Lord for your last look! Great job! Much ❤


Thanks Lisa!!! We couldn’t have been more pleased….


Ah, the running around…. I know those days too well. You still managed to get plenty of great photos though! =) And the social media stories… that is perfect! It’s wonderful how helpful and kind people can be.


ABSOLUTELY!! It is so refreshing to see people in the sewing community support one another….they are a gracious bunch of people, we tell you what!!


Ahhh… you girls are too sweet! And these outfits are so precious. I’m dying over that collar! Great work!