PR&P: A Look Behind the Scenes {Week Two: Movie Inspired}

The “Let’s Go to the Movies” Challenge created another ripple in our brainstorming phases. You see, we had sewn along {you can see our creation here} with this challenge once before….in the first season we had ever sewn along with Project Run and Play! And, when we sew along / create something based on a theme…..well, we kind of get attached to that outfit, movie, and character inspiration. Still, as much as we would have loved to try our hand at another one of these movie looks, we knew we’d always compare it to the first….and we just needed to have a fresh start…. 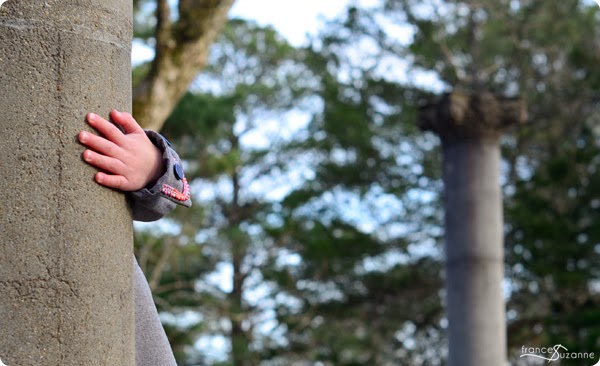 So, the brainstorming began…Movies were watched….
Precious sewing time was lost….And, decisions had to be made….
What were some movies discussed and/or watched that didn’t make the cut?
The Parent Trap {original version}
The Gnome Mobile
Rebecca of Sunnybrook Farm {or any movie starring Shirley Temple}
But then we landed on Mary Poppins, and the movie references started putting our brains in overload! This is one of those kind of movies that we could gain sewing inspiration from again…and it would look completely different! 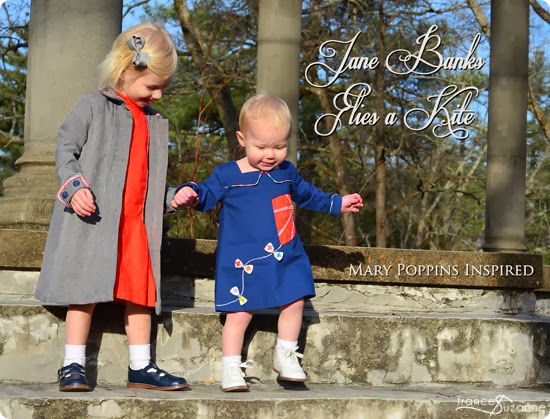 Our nieces don’t watch many movies, or have ever been to the movies, but we decided to show them {well, especially EA} some of the finer points of Mary Poppins and Jane {the character that inspired her look} over Thanksgiving. The ‘finer points’ turned into the ENTIRE MOVIE!! She LOVED it, she LOVED Jane, she LOVED when Michael couldn’t snap to clean up the nursery, and she LOVED when Jane and Michael were swept up the chimney! It was such a treat to see EA enjoy a movie we all enjoyed in our younger years….

EA’s moving rendition of “Let’s Go Fly a Kite” and “Just a Spoonful of Sugar”
have been heard since that time, on random occasions, in random locales…. 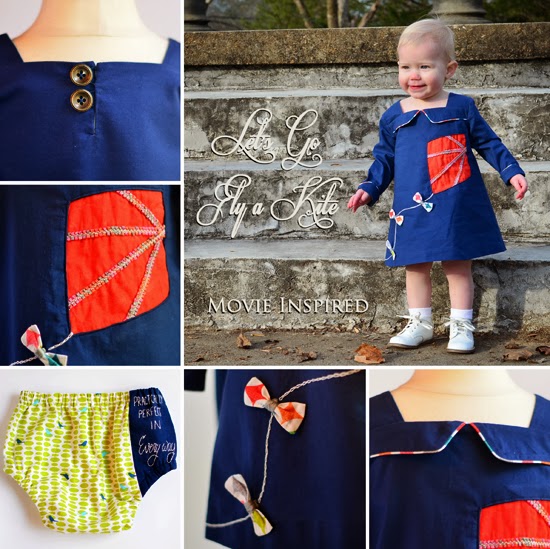 But back to our questions: 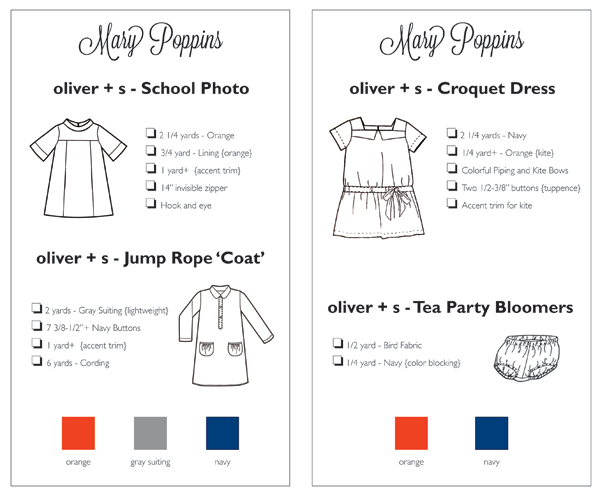 What was the most time consuming aspect of the look?
Besides watching the movies?? That would be the cording on either side of EA’s gray coat. We were so pleased with the result, which made it completely worth our time to “get it right.” 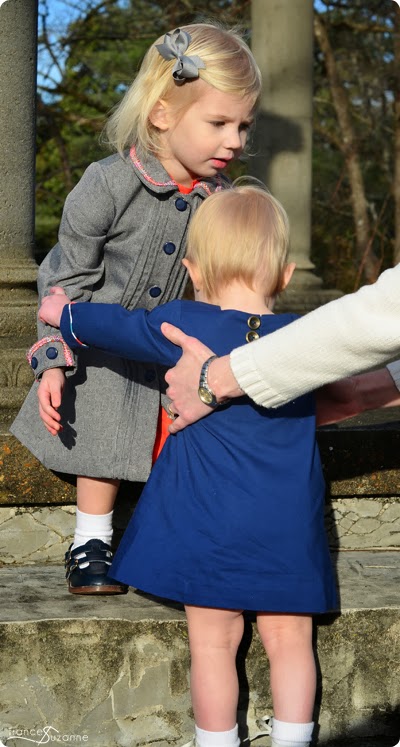 What did we dread / put off completing?
CL’s reverse applique kite. We made the dress before doing this step….to insure we got the kite positioned where we wanted it to go! So, cutting a hole in a practically completed dress tends to be stressful. That said, however, the tutorial we used was great….and it was an easier process than we imagined. We see other reverse appliqued garments in our future… 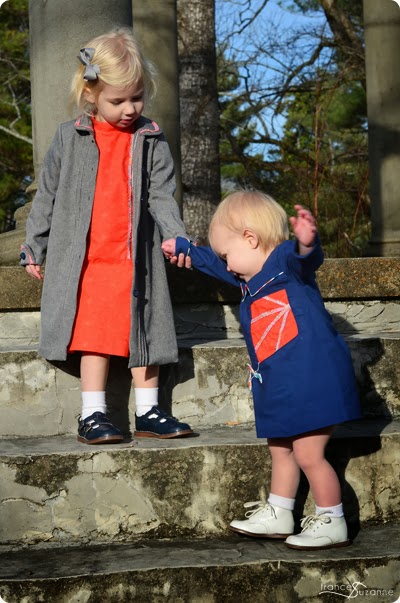 What was the biggest ‘ah-ha’ while working through pattern redrafting?
Reworking the neckline area of the School Photo Dress and combining it with the Music Class Blouse‘s view B collar. After adding 1/2″ to the inner shoulder seam of the School Photo Dress, and continuing the curve back to it’s original line, the Music Class Blouse’s collar piece fit perfectly! This was much easier than we imagined, and interesting to see how the lines of each pattern can be combined with little effort!

What fabric did we build this entire look around, and what was a last minute ‘grab’ to tie it all together?
The first fabric we bought for this look was CL’s kite ties fabric. Originally, we planned to use it as piping, kite ties, and bloomers. But then the “feed the birds” fabric trumped our original plan for bloomers….and the rest is history!
Who got the biggest “GOOF” for the week?
It was a tie….and it didn’t involve Emily {suzanne} this time around.
First big goof goes to Ashley {frances}! Although we were highly organized, she checked the lining fabric off our shopping list…when we didn’t have it! We frantically called the store for more orange fabric, but no luck. Eventually, we found a close match, and ordered it online. Buttons for EA’s coat also proved to be a minor issue. Again, it was all about our checklist! This time around, the buttons weren’t checked off and we ended up with two sets {different – but both navy – and not enough of either one}. That led to Sister Momma being called…..and a request for another package of buttons.

As for the other goof? It would qualify more as an accident….for a little three year old model!  An hour drive and two photo shoots will do it to a youngster any day. The positives of this experience? She didn’t want to take her dress off, and had to be coaxed to do so. A definite winner!

Now….If you haven’t already done so, there’s still time to vote for your favorite “Let’s Go to the Movies” look for the week! Voting closes Thursday night, so cast your vote before then….because… 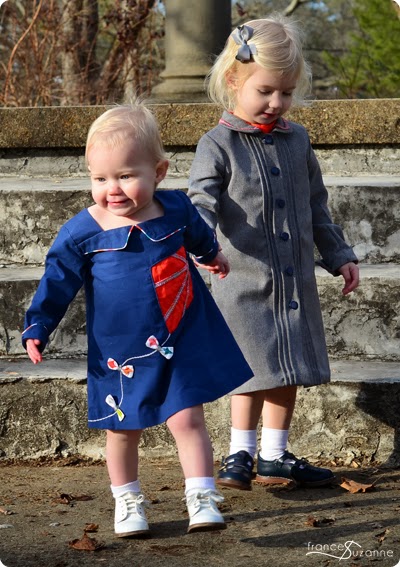 We are crossing our fingers that we’ll not be blown away and be around for yet another week to share with you our “take” on the Week Three: Upcycle Challenge….


Once again your attention to the details takes your outfits to a new level. The reverse appliqué, the time consuming cording on the coat, redrafting pattern and your excellent sewing skills all went together perfectly for these delightful creations.
As mentioned before, you two are having too much fun!


Fun??? How can you tell :)?? We’ve sure captured some treasured photos through it all!!


Someone else has seen the gnome mobile!!!! Lol!! Anyways your creations are amazing, as usual! That coat is lovely!


I found that treasure while looking for a movie I didn’t think any of my 1st graders would have seen….I showed it for the 1st time last year, and they howled during parts of it!! The little girl’s {same actress as Jane Banks} suit is super cute!! There were others on our ‘narrowed down’ list that I should have included, but oh well! We spent waaaaayyyy tooooo much time determining which movie to use!


I don’t normally vote in these competitions, (I feel so badly for those voted out) but I did vote for you.
Good luck!
xx N


Again, love the shopping cards! Those are truly genius. =) Although of course the proper checking procedure is important. 😉


Congratulations! Yall are awesome! Can’t wait to see next week!


I’m so happy for your win this week!
You have done a great job, as always.
I hope to see all your PR&P creations…