PR&P: A Look Behind the Scenes {planning and prep}

Have you ever have an “Oh my goodness….what was I thinking?” moment?? Well, we’ve had several – many within the past month – that began with that exact statement {well…with, errrr…” What were WE thinking??”}! 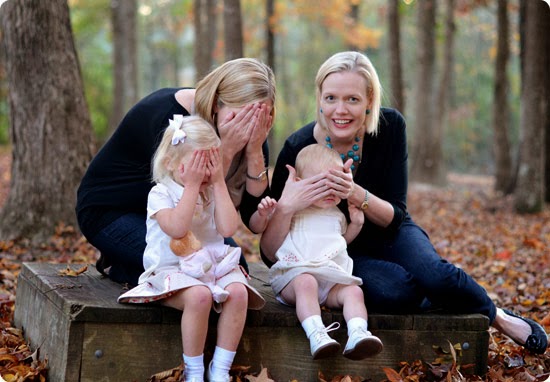 But, nonetheless, here we are…..knee-deep in creating our Project Run and Play garments ….and shaking our heads as we attempt to pull off our upcoming ‘weekly visions’ to share with you! While we’d consider ourselves to be “Old Faithful” sew-alongers since season 4, the unknown of competition has us scratching our heads and frequently second-guessing our thoughts and processes.

And, if you’ve headed over from the Project Run and Play site {where our ‘sewing roles’ have been revealed}…WELCOME! We have promised to ‘keep it real’….and so we shall! You may know more about us {and our sewing process} than you ever wanted to know over the next several weeks….

So, let’s begin with…
The Elephant in the Room:

After committing to participate in Project Run and Play, Season 8, there was a piece of time that was what we’d consider the waiting stage: no challenges or competitors were known, yet we knew time was precious and we needed to make the most of every moment! But since we had committed to a few other guest posts, etc. prior to the PR&P invitation, we knew we had to finish those up before diving into full-throttle PR&P mode! No matter how we tried, though, our minds kept returning to ‘the elephant in the room’ – the one thing we weren’t supposed to be discussing but wanted to….Thus, began many a conversation: “You know that elephant in the room……”

Brainstorming Phase:
The big topics of discussion: WHO would be our competitors, WHAT challenges would we be facing, and VARIOUS sewing ideas we’d like to incorporate within the weeks’ themes. So, we made a list….three to be exact….{as if we had time for those sorts of shenanigans}!!

A BIG chunk of our time was thinking through possible challenges. We knew they were going to be ‘favorites’ of past seasons, but nothing more. We ‘nailed’ the Winter Wonderland week {given it was the first challenge of the first season of PR&P} – what better place to begin than the beginning?? We even bought a little golden book, from yesteryear, to help with our brainstorming phase of this challenge. This book was a favorite of ours when visiting our grandparents, and while the images were etched in our minds….the title wasn’t! Thankfully, the “Queen of Golden Books“, was able to tell us the name of the book – and we ordered it soon after learning the title…. Another challenge we thought might be revisited was “Sewing Through the Decades”….oh well….we would have gone with the 1960s….ALL THE WAY {as if you had any doubts on that}! As for the challenges we FEARED?? Boys week and chevron week topped the list on those…

Research / Fit and Development:
We don’t have the luxury of having our nieces nearby to try on garments {or partial pieces of garments} as we sew-along. We are more of a “one-hit wonder”….hoping to get the correct fit on the first go! And, as you know, in a competition like this, there are no times for mistakes …. especially ones that involve fit. So, one weekend, we headed an hour south to play ‘dress up’ with the nieces!! Our ulterior motives: have the nieces try on various garments, take pictures of them in those garments, and then measure and take notes of seams, etc. That way, we would have pictures of the garments and measurements to cross-check as we sewed along through the challenges – when our nieces weren’t present to do just that. And if you ever wondered if we worked on EA’s hairstyle before ‘true’ blogging pictures…..well, here you go! 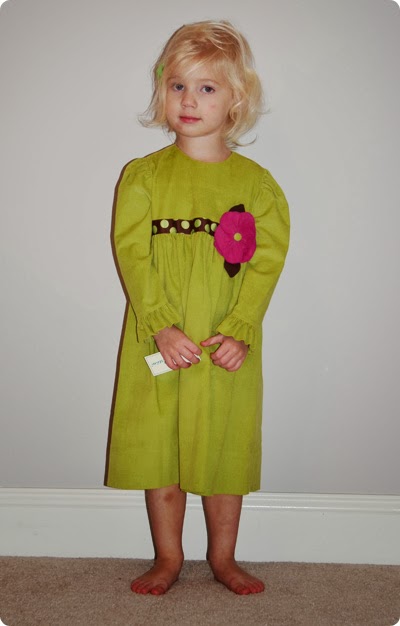 Photos of us:
Since we are more ‘behind the scenes’ sort of people, we could have done without this step….but it sure did give us some priceless pictures of us and the girls {hilarious might be a better word for it}! We’ve revisited these pictures on countless occasions since then for mere laughs… 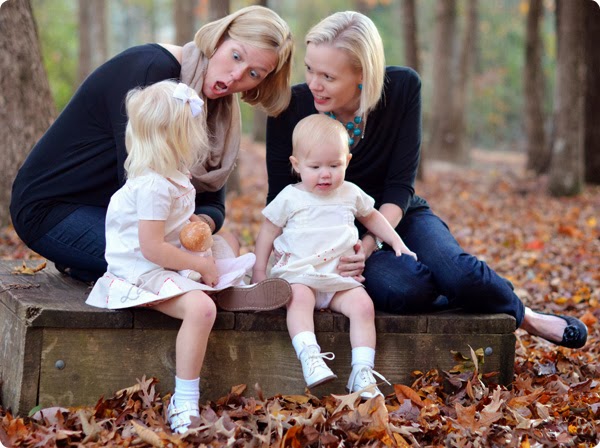 Competitors and Challenges “Announced”:
So, the day arrived we received the email with both the challenges and competitors, and the true brainstorming began…. We decided our ‘vision / plan’ for each challenge – except one {more on that during the given week}, and made ‘shopping cards’ for each. The backs of these cards are seen below, and will be revealed as the weeks progress. This took approximately a week of planning and deep discussion!! 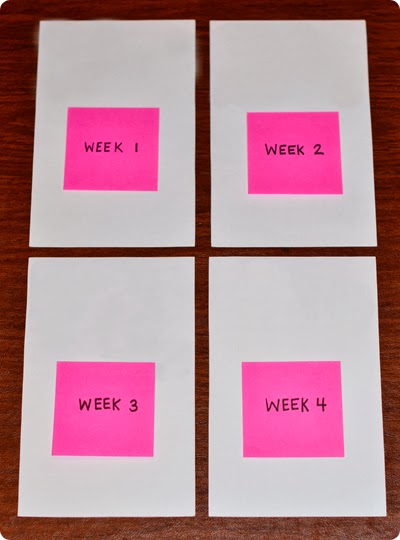 Shopping:
While there are several terrific places to shop for sewing supplies, none are less than an hour away. We had to be thorough and complete in our shopping experience. There was no time to forget a key piece and return for it….

That said, we did pretty well securing our supplies in one outing. Just a few minor bumps in the road that we’ll share with you as the weeks’ progress….

Fabric was washed, dried, and ironed….Patterns were ordered/prepped/redrafted….and the sewing commenced. But, more on that later!

Week One: Winter Wonderland is just seven days away…and we are anxious to share with you what we created {and some more behind-the-scenes information}….but we can’t….not quite yet!

So, we’ll just end with the “Biggest GOOF” thus far:
This week, the award goes to Emily {suzanne}…a few weeks ago, she proceeded to ‘publish’ the post entitled “PR&P Intro for liZ and Elizabeth” – it was completely blank, but was set up for the purpose of our introduction on PR&P’s site today. She quickly deleted the GOOF, but someone +1d the link. That led to several blog hits the following day on that broken link….OOPS! We’ve since scheduled our PR&P posts for the year 2015, and set the date prior to even titling them.

And that, friends, is….“Keeping it Real!”


I love seeing this inside the workroom view! Can’t wait to see what you’ve made to share! That book looks like great inspiration! My Winter Wonderland was inspired by a song and an animal… Eight days till reveal!


Ooooh, I’ve got a guess then…..while we are tickled to have the book, none of it was used in our “week one look”…

Anne at Film and Thread


Your nieces are so fortunate to have aunts who sew such beautiful clothes for them. I really love your mix of heirloom techniques and modern style. I would love to know where you shop for fabrics in Alabama. Sew Delightful in Tuscaloosa is great, but it would be nice to find some resources north of Birmingham.


Thanks Anne for your compliments AND the fabric resource in Tuscaloosa {we’ve never been there}! We typically shop in Birmingham, Nashville {Textile Fabrics is fantastic, as well as the Bernina store in Franklin}, and Opp {TJ’s Fabrics: south of Birmingham … but well worth the drive}.

Anne at Film and Thread


Thanks for the reply. I will give those places a try. There isn’t much here in Huntsville where I live and it is so much more fun to see fabric in person than buy online, if possible.


Thanks Catherine!! We are looking forward to sharing….but are wishing for a few more days of sewing, photoshoots, and blogging. You know the feeling!!


I think you sew beautifully but I must admit, I follow you for pictures of the girls. Well, until today when I saw your faces! I love and miss you both!


Lol! Can’t tell you how many times I’ve accidentally published a post. *hangs head in shame*


I LOVE the photos of you and the nieces. =)
The idea of taking photos of the way things fit with measurement notes is great if you don’t have someone to try things on… and is also a good idea for those of us who sew while the littles sleep. =)
I’m impressed with your organization too. I love that you made shopping cards for each week.


Ahhhh, I hadn’t thought of the pros to having photos and measurements for ‘sleepful times’. We are excited to show our week 1 shopping card next week!!! Over organized, much???


I love you girls! Thanks for sharing. We are all on pins and needles(no pun intended) waiting for the big reveal day!
with love,
-Jo


Well played, Jo….well played :)…. Love us some Shaffer Sisters too!


I just found your through PR&P and I’ve been looking back at some of your old posts! I love seeing what you’ve made. It’s fun to see little girl clothes, especially since I sew primarily for my son. I’m due in 2 weeks- so maybe I will have a girl to sew for soon! We chose not to find out what we were having in advance… Not to sound like a stalker, but where are you in AL? I’m in Mobile! Looking forward to seeing what you do this season!!


Ohhhhh, you are so brave….and what a great surprise {I don’t know if I could do that!}!! We are in North Alabama, but LOVE to shop in Opp – at TJs Fabrics. I’m sure it would still be a long trip for you, but it is so worth it!! Such a friendly, accommodating staff and highly organized fabric selection….


I really enjoyed reading your intro post on PR&P! It was especially interesting to see the division of labor.:) Good luck! I can’t wait to see what you all made for the challenges.:)


Thanks, Cindy…. We are SO EXCITED about Tuesday!!