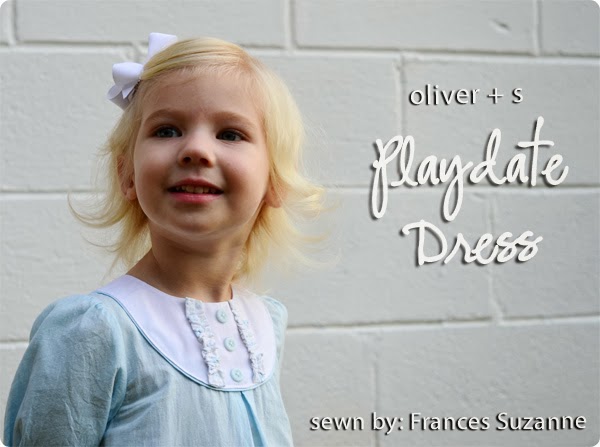 We EXPECTED to sew this pattern last winter/spring. In fact, it was even cut and ready to go {2T with 3T length}. We HOPED it would fit. 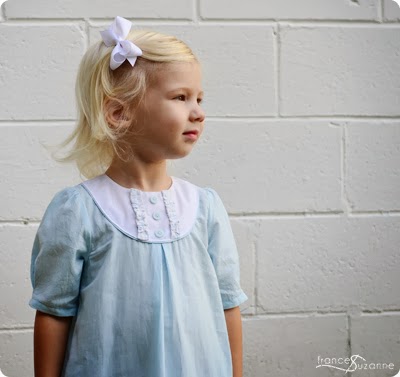 Then, we sewed this Playdate Dress back in May, and we adored it! While we had our own share of worries and woes with the drawn thread technique, the dress itself came together with ease. My only note to self after the experience was to use flat piping {per the Oliver and S instructions} rather than the corded piping that we had opted to use.

We EXPECTED this experience to be smooth sailing. 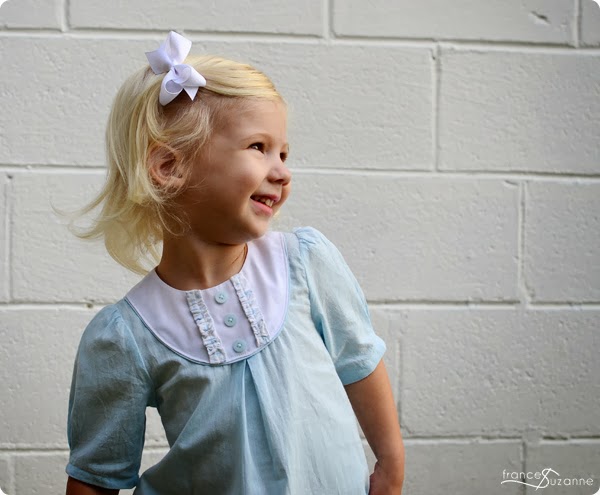 Of course, my memory isn’t all that great either. I was envisioning sewing an Oliver and S, 2 scissor pattern, when in fact it is a 3 scissor pattern. As I progressed through the pattern, I thought MULTIPLE times: WOW at the details on this 2 scissor pattern. While the detailing {pleats on sleeves, center front, etc.} was not difficult, there were many of them…..which added to the overall loveliness of the garment. I EXPECTED a fairly simple, quick sew, 2 scissor pattern, but it was quickly turning into a very “detailed / I can’t believe how slow I am” sort of garment. 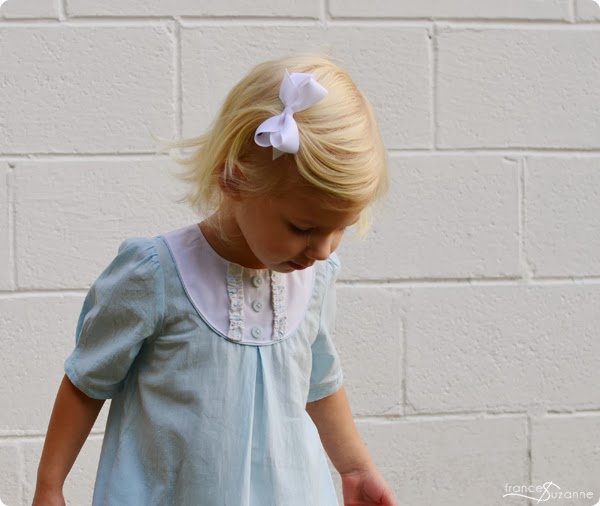 It wasn’t until I got to the ruffles {and was about to pull my hair out} that I double checked the pattern and realized it was a 3 scissor pattern. Strangely enough, that helped my feelings. Maybe I’m not as bad as I originally thought . . .I mean this IS a three scissor pattern. And I am actually following the directions with ease. Success. Back to the ruffle ‘situation’. Do you find there are certain garment details that you love, and are more willing to put the time and effort into achieving? I DO! 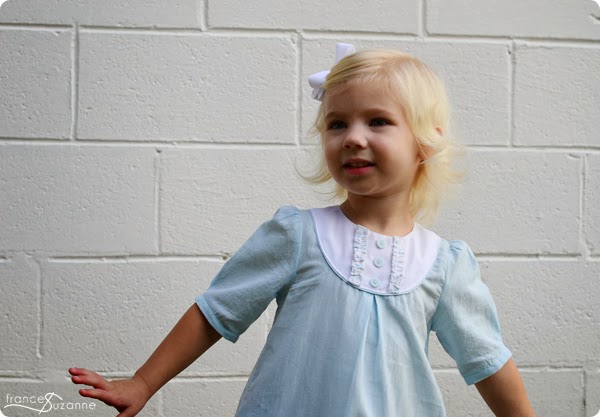 If I saw a pattern with a HUGE bow, I’d probably want to be done with that bow in no time flat because my sister and I are just not big bow lovers. Or better yet, we probably wouldn’t choose the pattern to begin with or we’d eliminate the bow altogether. This is how our relationship is with ruffles. 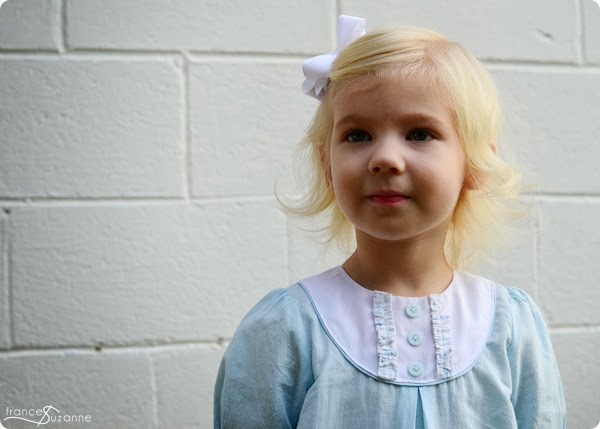 Even though the ruffles were only accents, I wanted to be done with them as quickly as possible. And they wouldn’t cooperate. Maybe it was a mutual feeling, they lacked loving us, as much as we did them. It boiled down to: 1) they were difficult to turn and then 2) we never were able to get them positioned ‘just so’. As I scoured google images for other playdate dresses, I came to the realization the pattern looks gorgeous without the ruffles! Although I think with our fabric selection, we needed a little something extra on the yoke. Note to self: next time, no ruffles; more exciting fabric and/or button selection.

Of course, we love the detailing of pleats on the sleeves and center front area. I readily admit that I need a bit more practice in making my yoke perfectly smooth and rounded, yet I love the technique used in attaching the yoke. And, I’m not the only one. You don’t have to read much on this lovely pattern to see that this is one of the big selling points and ‘loves’ of other bloggers. 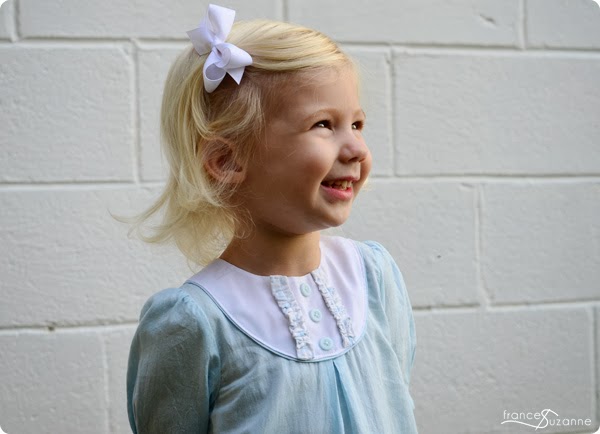 If you are itching to delve into this pattern, be sure to also check out the oliver + s forum for helpful hints on the playdate dress, as well as, a sew-along hosted by Nicole {motherof5} on this very dress. Sadly, I ran across her sew-along after completing our version, but she has some excellent pointers on the ruffles, as well as finishing the yoke seam. 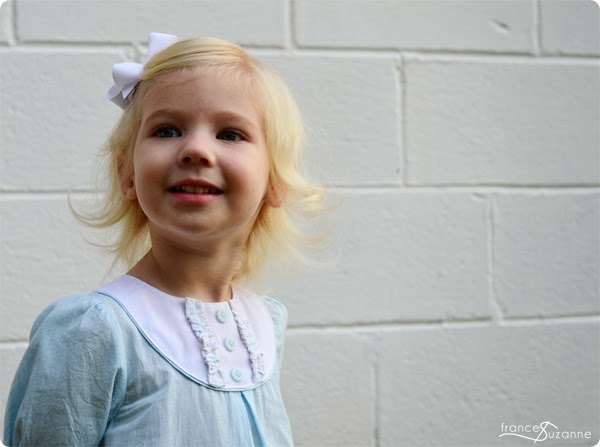 Will we be sewing this pattern again? That would be a resounding YES. Next time, however, we will be EXPECTING the beautiful detailing of a 3 scissor pattern, as well as the work involved in achieving such a garment. 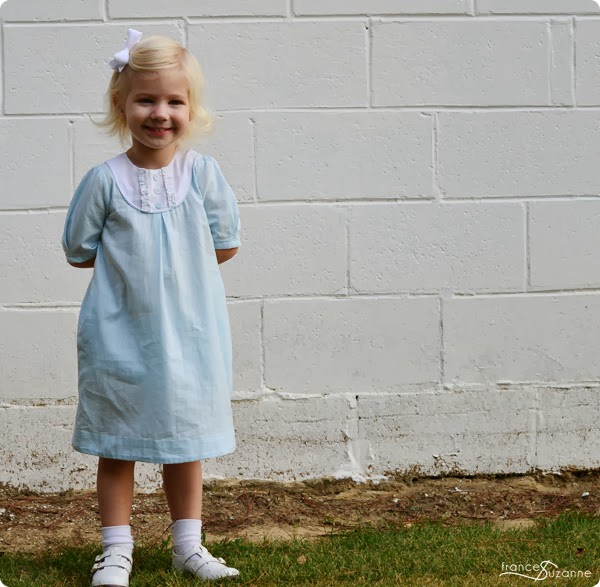 And besides, our parents wouldn’t have it any other way, because it is one of their favorite creations to date.


So cute! I’ve made this pattern once without ruffles. One of my favorites.


It’s such a beautiful dress…..and, your niece is looking older….


It’s a darling dress! I love the colors.
I love tiny ruffles on some things, but most ruffles are a bit too much for me, and I prefer single-edged ruffles over double-edged, so I would probably leave these off too.
From looking at the pattern page, it isn’t easy to get those ruffles aligned… the example ruffles aren’t perfectly straight or perfectly placed either. =)


I do love this dress (and thank you for your compliments) I think your ruffles are perfection!
xx N

) but yours is understated gorgeousness! Well done.
I need to bust this pattern soon and am inspired by this beautiful dress


so cute! I want to make one now! pinning ;o) Emily


It’s a darling dress! i like the colors.
I love small ruffles on some things, however most ruffles square measure slightly an excessive amount of on behalf of me, and that i like single-edged ruffles over ambiguous, therefore i might most likely leave these off too.
From watching the pattern page, it is not straightforward to urge those ruffles aligned… the instance ruffles are not dead straight or dead placed either.
wedding dress


Thanks everyone!! This dress pattern has such lovely lines, we look forward to sewing it again and again for the nieces {now knowing it is a 3-scissor one} :)…


I really like your new dress. I think this is my new suggested clothing too