Do you know how thrilled we are to be here….
sharing our second Project Run and Play Look: “Let’s Go to the Movies” Challenge??
{insert: “Happy Dance” please} 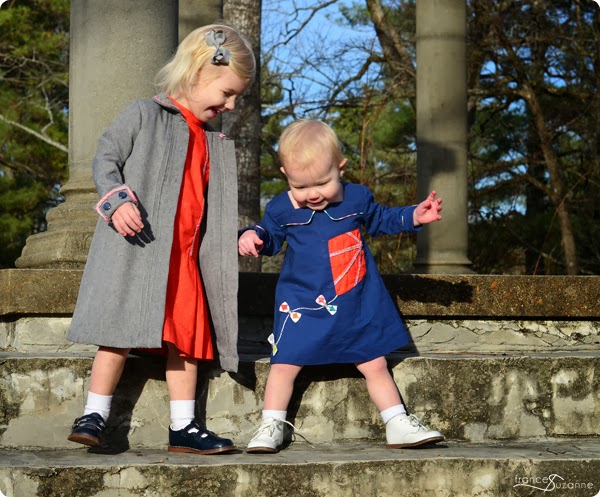 Well, today is the day!! Project Run and Play’s “Let’s Go to the Movies!” looks are revealed…

Thank you, thank you, thank you for helping us proceed to week two!!
We are still reeling over the amazing entries from week one
{Weren’t they “supercalifragilisticexpialidocious“?!? Sorry…couldn’t resist the reference….},
and holding our breaths for what the competition will reveal this week….
Voting remains open through Thursday evening, so make sure to go check out the competition
and vote for your favorite creation {we’d love it to be ours….} of the five entries.
Wanting a little more information about our looks??
Here goes…hold on tight, and consider yourself warned! Lots of pictures….lots of information…

Jane Banks Flies a Kite
For the “Let’s Go to the Movies” week, we challenged ourselves to make two separate looks, based on our movie selection of Mary Poppins – one MOVIE INSPIRED, and the other CHARACTER INSPIRED. How could one go wrong with a little Mary Poppins? Isn’t she “practically perfect in every way?!?!” This movie fit into our sewing era of choice {1960s} wonderfully, and thus began the brainstorming!!
Mary Poppins, Movie Inspired,
“Let’s Go Fly a Kite” Dress {CL’s Dress} 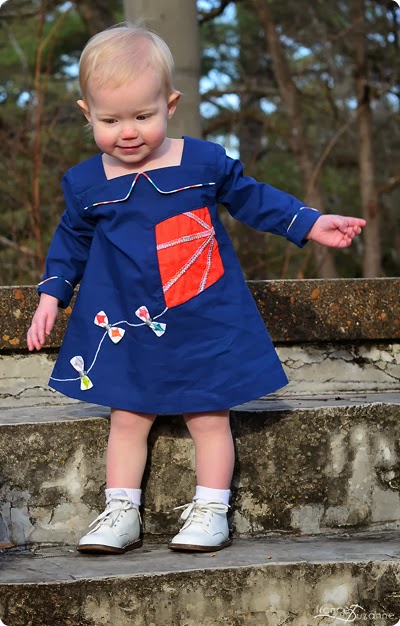 Our starting point was the Oliver and S, Croquet Dress {sz 12-18 mo}.
Modifications / Detailing included:
We redrafted the dress to become an a-line dress {11.5″ side seams} past the collar area. 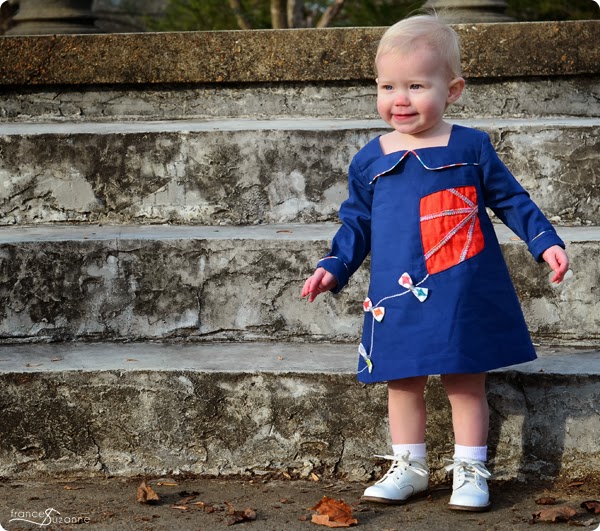 The mirrored piping was added around the front collar area, to accentuate the “kite lines.”

“Tuppence” buttons were sewn down at the back neckline, and held in place by hand-stitched button loops. Michael’s tuppence were precious commodities in the movie, and we didn’t want to have another “run on the bank….” while showcasing this look! 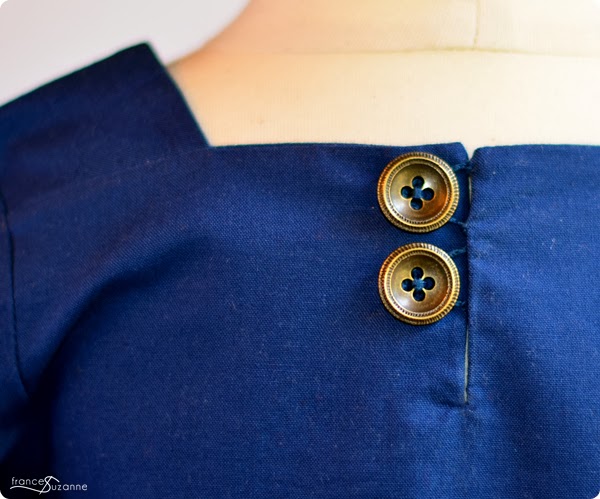 The sleeves were lengthened to create a long-sleeved version of this dress. 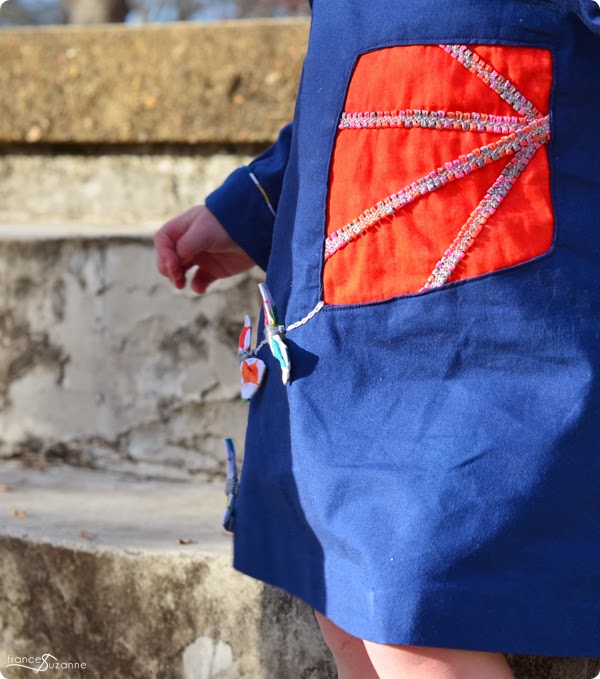 More piping was added on the notched cuffs, based on the Tinny Dress by Straight Grain.

Our focal point was the reverse appliqued kite {using this tutorial},
and was further detailed by adding trim to it. Doesn’t the trim look like miniature kite ties??

We embroidered {chain-stitched} a kite string, waving in the breeze. 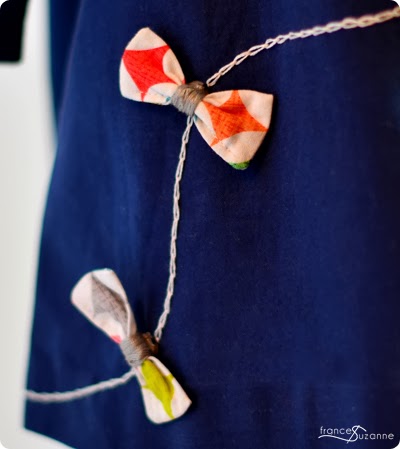 Removable {snapped} kite ties were then added along the embroidered string. To achieve this look, we sewed rectangular kite ties, tied them in the center with a clear plastic ponytail holder, and then covered each with gray DMC thread before adding the snap. 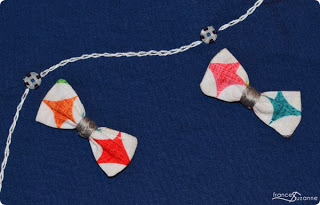 This added an element of dimension, as well as functionality of the garment’s cleaning! Yeah, we were pretty excited about our use of ponytail holders and DMC…hidden away in the outfit. Isn’t it amazing what “look” a little plastic ponytail holder and DMC can give you!?!?
Mary Poppins, Movie Inspired,
“Feed the Bird” Color-Blocked Bloomers {CL’s Bloomers}

Finally, as a hidden detail {but, oh so key} in the movie inspired creation was CL’s bloomers. Doesn’t every toddler need a pair of color-blocked bloomers?? The main fabric was one with birds {feed the birds, anyone??}, and the color-blocked section was added with the embroidered quote describing Mary Poppins as “practically perfect in every way!” 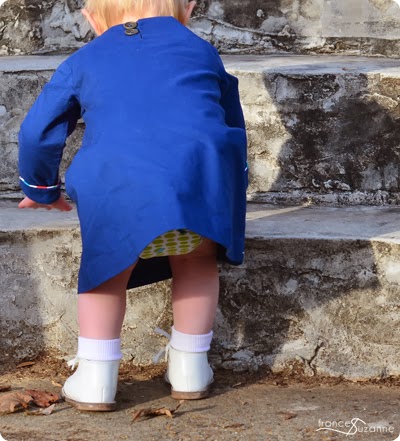 Our starting point was the Oliver and S, Tea Party Bloomers
{sz 12-18 mo, decreased seam allowances to 3/8″}.
Modifications / Detailing included
{because every toddler needs a pair of color-blocked bloomers, right??}:
The back right cheek of the bloomers was color-blocked. 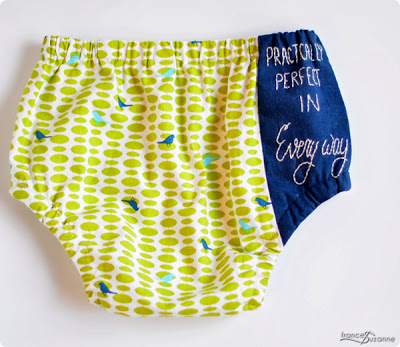 Interfacing was added {and lined}, and the phrase, “Practically Perfect in Every way”
was embroidered within this section.
Moving on to the Character Inspired aspect of the challenge… 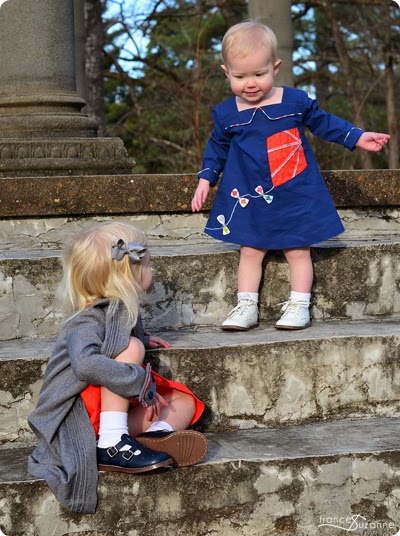 As for the CHARACTER INSPIRED look from the movie? That goes to Jane Banks! We “modernized” Jane’s look, but kept key details to her overall garment’s appearance. 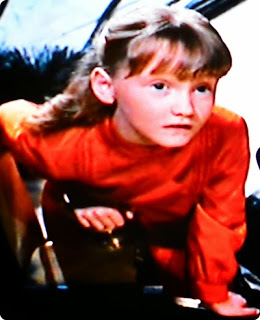 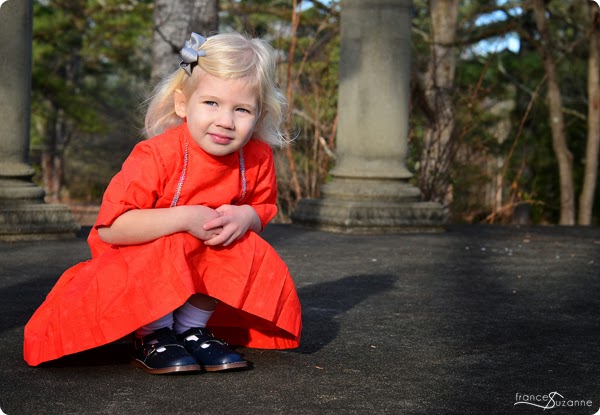 Our starting point was the Oliver and S, School Photo Dress {sz 3}. 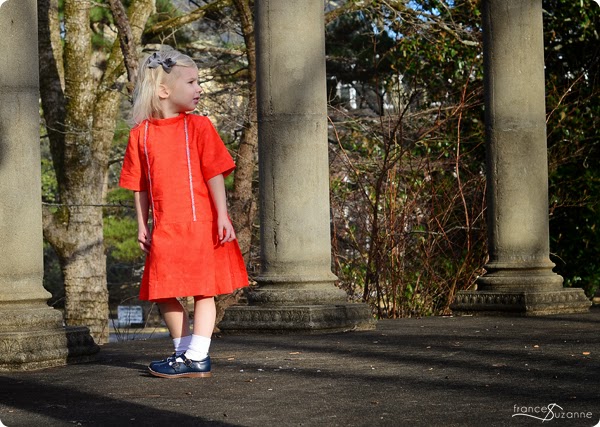 We redrafted the yoke piece of the garment to create a drop-waist bodice piece (8” finished side seams). 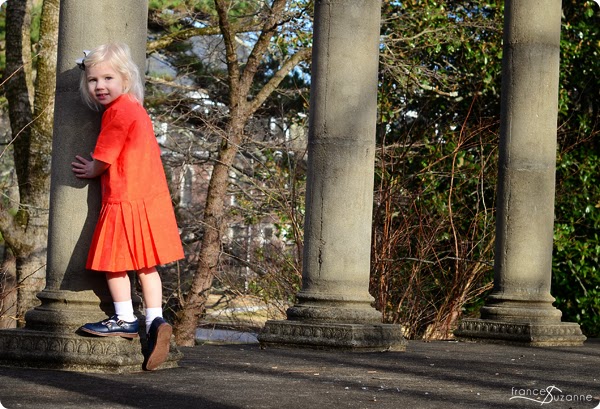 Shoulder seams were increased by 1/2” {towards the neck}, and the Music Class Blouse collar {view B, and attached with the opening on the back} was used to replace the original School Photo collar. 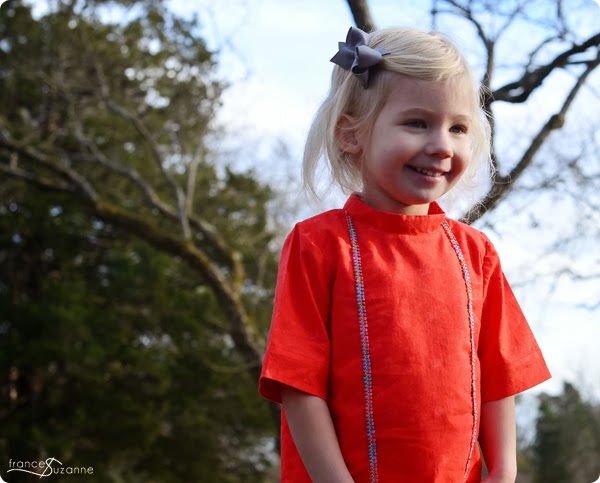 Trim {remember those small ‘kite ties’ that divided CL’s reverse-appliqued kite??} was then added along the front bodice to compliment CL’s kite dress, as well as EA’s coat topper {discussed below}. 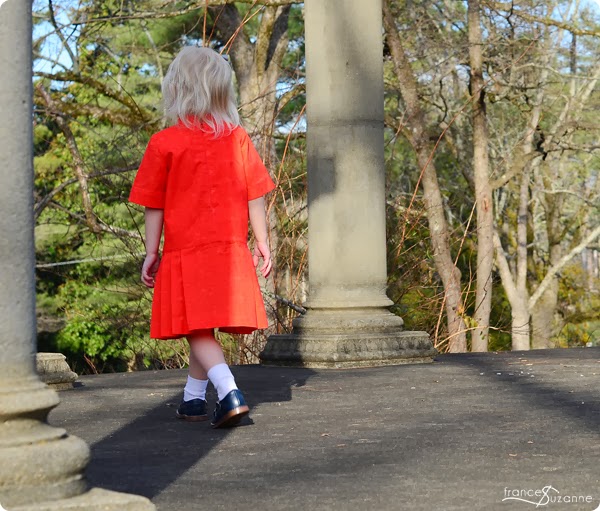 A side-pleated skirt was attached to the bodice area. 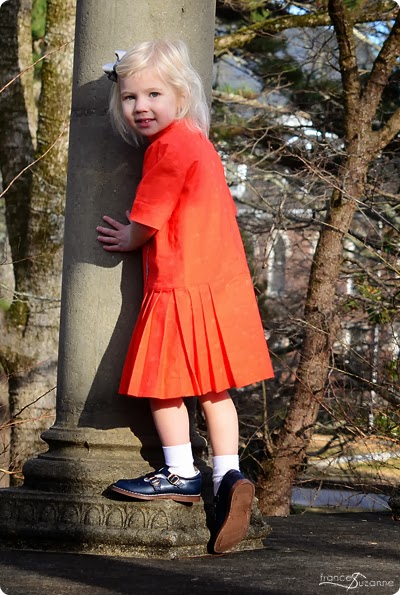 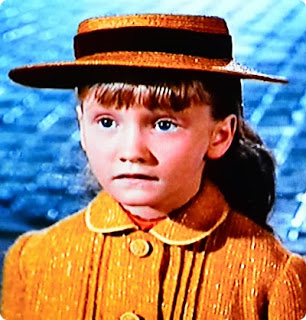 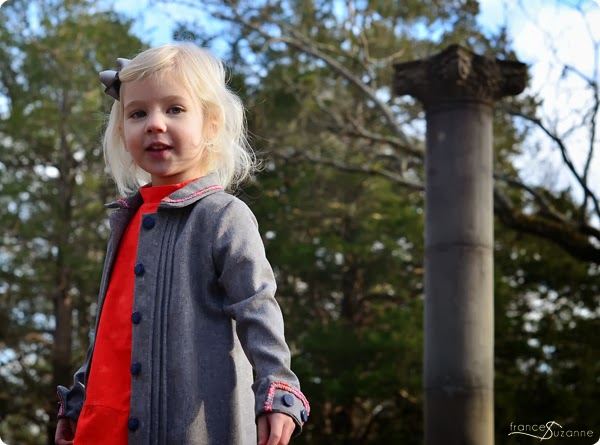 We began by splitting the front of dress into 2 sections with placket going down the front center, adjusting the pattern pieces width to accommodate the placket. 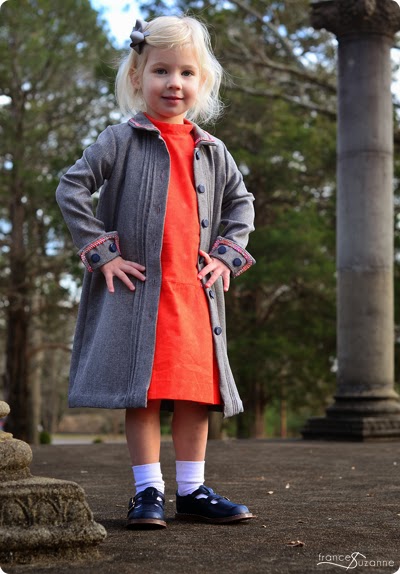 Keeping with Jane’s “look,” three thick strands of cording were sewn along either edge of the placket. This created visual appeal and texture running the length of the coat.

This was a DIFFICULT sew – keeping the cording evenly spaced on suiting fabric {not the stiffest of fabrics to be achieving such a feat}! 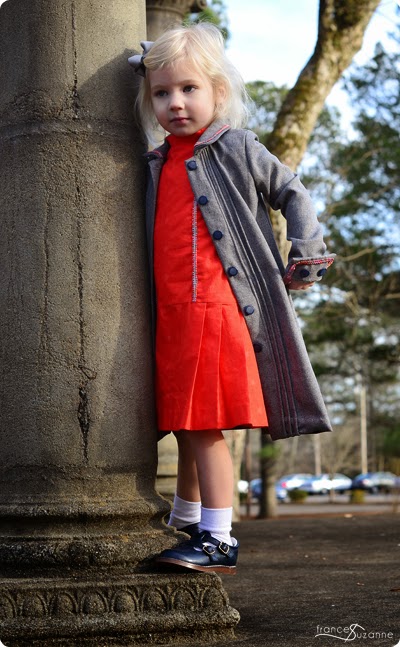 The dress was then lengthened to a “coat topper length” … long enough to cover the drop-waist dress underneath.
The detailed “faux cuffs” had us at HELLO {modernized from Jane’s original ones}!
From Jane….

These beauties tied the entire “look” together for us!! 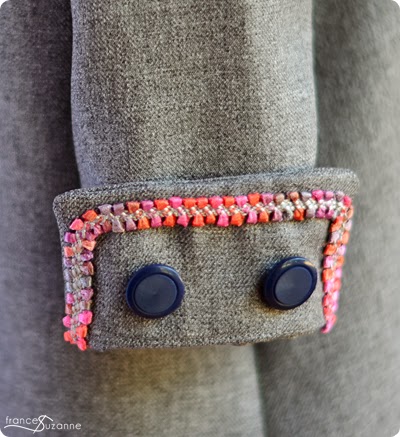 And, there you have it: Jane Banks Flies a Kite

Tomorrow’s post will be a little more “Behind the Scenes” action from this week’s challenge. 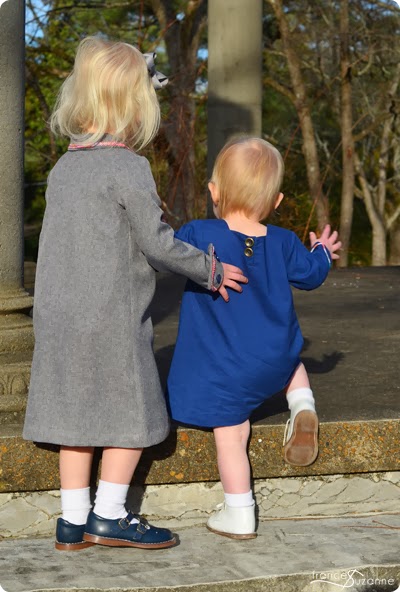 
Fun and cute as always! I love the cording along the placket and the kite applique!


Thanks Annika! This photo shoot was worth it for the photos ….. something we struggle to capture of both girls :),,,


I’m in complete awe! These two outfits are so detailed, refined, and beautiful! I hope one day I can do half as much.


Aw, thanks {but we’ve seen your ‘flips’….and yeah, you’re pretty amazing too}!!


I am so intimidated by your amazing skills! You picked the perfect movie (one of my favorites). Beautiful work, but I thought for sure you all had used the VFT’s Josephine for the coat! I haven’t seen the other entries, but I don’t know how I could vote for anyone else!


We had you at the orange and blue…. :)! You are dreaming of VFT’s Josephine aren’t you?? Can’t wait to see your ‘flip’ next month!!


I love the cording down the front of the coat and the cuff details. WOW… just WOW!
Deborah
sewmuchtogive


Thanks!! Those were some of our favorite details too….


awesome job again this week.
i love how the little details tie the two looks together.


Thanks, Jacq! We are still shaking our heads at the competition…..no one is messing around, that’s for sure!!


This is gorgeous! Favorite piece… the coat. That cording might have been difficult, but it was definitely worth it, and I love the faux cuffs! I really love CL’s dress too. I love that you made the kite ties removable, and the bloomer with the embroidered quote are darling.


Thanks Charity….yeah, the cording was needed to help the monotony of the gray!! The outcome was worth it!!


This is so lovely. I love your take on the both the movie and character inspiration! Wow, what a lot of time and loving effort you put into this! Mary Poppins is such a classic – your littles are just the perfect little models!


Great minds think alike!! We were anxious to see your look after getting the #julieandrews teasers on IG… Your Mary Poppins was darling!!


Um, ladies, these are GENIUS! And so beautifully sewn! I love all the details. Your two are amazing.

Hey, I have new spring patterns ready for a few special people. Let me know if you’re interested. One of them has your names all over it!


We are SO flattered you like these outfits, Liesl!!


The cording in the coat is such a fantastic detail that really gives it a unique look!! But the cuffs are what I love most about it. Great work!


Thanks Irene!! We are in awe of the time, effort, and dedication everyone has brought to this competition….


Wow! These looks are beautiful! I love them and I voted for y’all!


I’m blown away! Each piece is meticulously crafted and oh so adorable. I have no doubt that you will be moving on to week 3.:)


What wonderful work! I always love your creations and how you incorporate the little hand sewn touches and heirloom techniques. I also love how you are using both girls in your ‘looks’ for each week. I have to say that the little bloomers with their color blocking and the unexpected quote is one of the most enchanting details of these outfits!


Coming from one of the ‘queens of heirloom’….we are tickled you like those touches! And, yes, the color-blocked bloomers still make us giggle… As for both girls being in the ‘looks': photo shoots are…..ummmm…..interesting {to sa the least}!


Wow!
You ladies are truly amazing – I’m over the moon with all those precious details!!
Can’t even imagine how much it took you to work on all of these pieces. A labour of love, indeed.