April 27, 2011
The Day the Lights Went Out in Alabama
If you are looking for a riveting story about how I barely survived, I count my blessings that is not my story to tell. But, this is my story.
On April 27, 2011, we had been warned. The Weather Channel was using a new color (white located inside the red circle) to indicate potentially how bad our afternoon could be. And our community was located in the white bull’s eye.
Even though we had two tornados rip through our county, we were the fortunate ones. We experienced the first tornado of the day around 6 AM south of town. This event cancelled schools for the day, and made everyone “weather aware” by 2:45 when the big one came through. It was an F4 tornado, ripping through the heart of our city, and we only experienced one loss of life in our community. Other towns and cities nearby weren’t as fortunate. 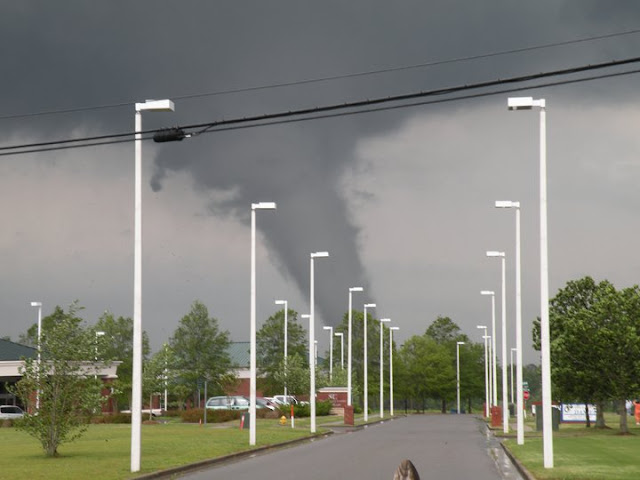 Photo by: Bill Piper from our vantage point at work
{I was one of the idiots standing next to him}
I primarily work with guys, and as we all know they tend to forget all rationale when it comes to weather ‘events’. So, at 2:45 with eyes as wide as saucers and all of us standing OUTSIDE (taking pictures – see above), I shook with fear as the tornado passed by us. When this photo was taken, the tornado was about 2 miles away, but at one point it came within a little over a mile away from us. I felt like the tornado was closer, but in reality, it was larger and further away. Being so mesmerized I forgot that where there is a cause, there is an effect. 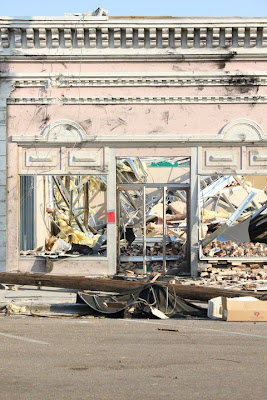 Sadly, I don’t know who took this photo, but it is the ‘pink building’ and home to what was our children’s heirloom, smocking and fabric store. It had closed a few years before the tornado tore through our town.
Even though I had witnessed the cause, I was clueless as to what the effect had really been. When I got in touch with my friend, she was at her mom’s house and was fine, but said, “I don’t know about our house though.” I am not an overly dramatic person, so I visualized a few shingles off, maybe a tree down in the yard. A few hours later, I received word that her home had been destroyed. Within the next few hours, I’d learn her husband’s business had also been destroyed, while his parent’s home and her parent’s rental property had incurred damage. I was definitely on the outside looking in.
As always, the sun rose the following day and there was work to be done. We grabbed our camera and my family headed to my friend’s house, but I couldn’t locate it. Large, old trees were gone, and the landscape had entirely changed. I could see the sky. In retrospect, I was staring at their house the entire time I was unsure whether we were on the right road. All around, there were people I personally knew that were effected — businesses and homes completely gone. I thought I was emotionally prepared, but I wasn’t. I didn’t take a single photo. I couldn’t. Fortunately, someone did. 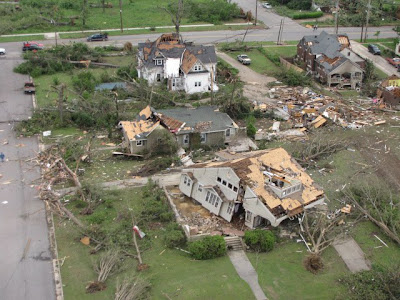 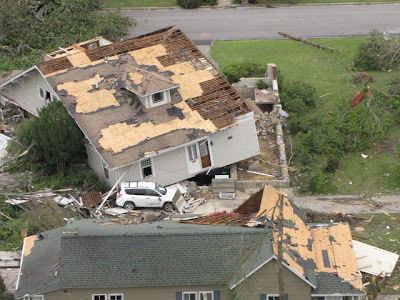 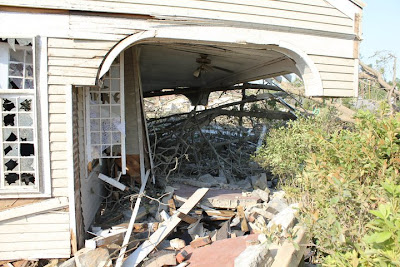 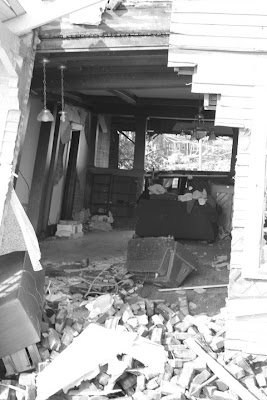 I remember primarily being dazed, but humor was in the air as well. My friend, who by the way is as tough as nails, greeted us with, “well at least now we won’t have to worry about getting the house painted.” Later on, her new Kindle was found with a sopping wet cover, AND it came on. We laughingly told her that she could be in a commercial “The Kindle: Survival of the Fittest” with what was left of her house in the background. Their house had literally been picked up by the tornado, rotated 45 degrees, shifted 10 yards off its foundation was lying at an angle, but yet there were baskets on a ledge in the kitchen that were exactly as they had been the day before.
When I was busy helping, life was good. It was when I slowed down that reality set in. Sleepless nights and driving alone in the car were the most difficult times. When I stopped and listened to the background music and watched this video, I cried. Big ugly alligator tears. Maybe it made the past few days real instead of surreal. Everyone knew someone that was affected by the events, and everyone had a story to tell.
A lot had changed in our lives in a few short minutes, but Sunday was still a day of worship. Our church building had been untouched by the storm, and was being used for disaster relief. A few lucky ones had power, but after five days, most of us did not. But we came together to thank God for protecting our families and to praise Him through songs. Ironically, I remember singing, “After the storm passes over. . . “
While my family didn’t experience loss of property or life, in the upcoming weeks, we’d lose our second largest customer at the time due to our business’ loss of power. Painful, yes, but not irreplaceable.
What I remember: twenty dollar gas rationing and long lines at the pumps (with no rioting or complaining), the humming of the generators at Walmart once they were able to open and the quiet nature of those shopping, perfect weather for the days following the storm, a continuous sound of helicopters overhead, blue tarps lining rooftops, community grill outs (a.k.a save the meat from spoiling), curfew, national guardsmen with M-16 rifles, asbestos masks, debris, closed-toe shoes being required for teachers and students for the remainder of the school year, crunching glass, ice was a high commodity, cash was king and a credit card would get you nowhere, traffic lights not working due to power outage countywide, and THE PEOPLE – caring, helping, generosity, working, giving, the list goes on and on.
Most of the world will remember April 2011 as the time of the royal wedding and the death of Osama Bin Laden, but for those of us in northern Alabama we will remember it as the time the lights went out in Alabama.
Today, the lights are on in Alabama. Even though in my lifetime, the trees and landscape will be permanently altered, I believe the lights here will shine more brightly than they have ever shone before through the people living in my Sweet Home, Alabama.


Powerful post, beautifully written. Prayers and blessings for your community.


What a terrifying situation to be in. It’s difficult to imagine the force of nature until one has experienced it as you have. Thankfully you and your family were spared the wrath.


Gripping post. Sounds like the community really rallied and lifted up those in need. You should be proud of your Sweet Home, Alabama!


We live in southern middle Tennessee and remember that day well. The next day we spent trying to get a hold of friends (we attend church in Huntsville) and making sure everyone was OK. When I read the post I knew you were talking about Cullman because to this day when I drive there I sometimes don’t know exactaly where I am due to the changes from that day. We prayed like we have never prayed before for all those just a little south of us.


Thanks for your kind words! It was definitely a day to remember….technically a timeframe to remember!


[…] KCW came and went and all we posted about was a personal story of an event from two years ago. Glad we could clear the air on […]