You are probably aware of the legend of The Great Pumpkin, a holiday figure (comparable to Santa Claus or the Easter Bunny). The summation: Every year, Linus sits in a pumpkin patch on Halloween night waiting for the Great Pumpkin to appear. Invariably, the Great Pumpkin fails to turn up, and a humiliated but undefeated Linus vows to wait for him again the following Halloween (source: wikipedia). 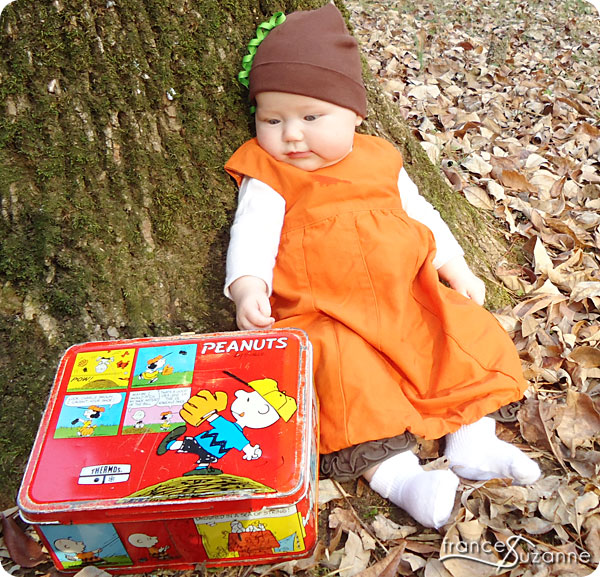 So, this Halloween, we opted to recreate a version of The Great Pumpkin. 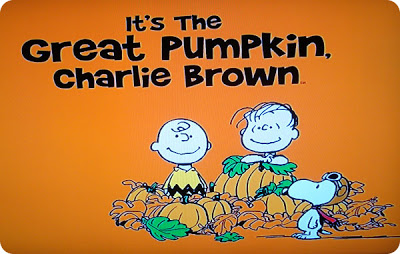 Our starting point in making The Great Pumpkin was the Oliver + S, Bubble Dress pattern. 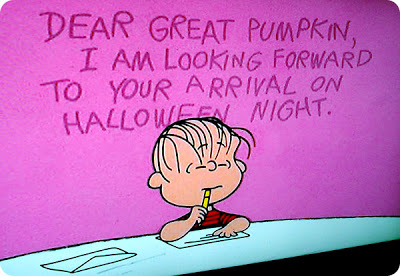 We had made a previous outfit using this pattern, and had been pleased with the result….so, we opted to make a second outfit – but this one with a little twist.

Our goal was to make a practical pumpkin outfit – one that can be worn at times other than Halloween. 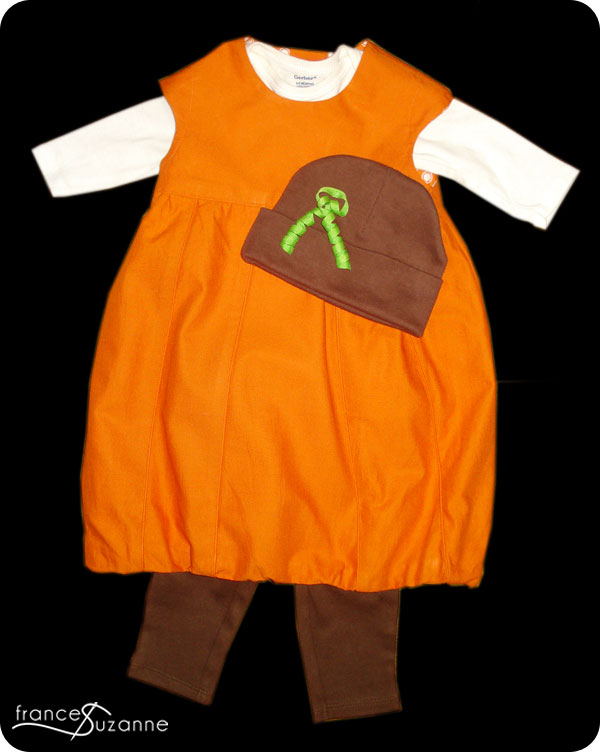 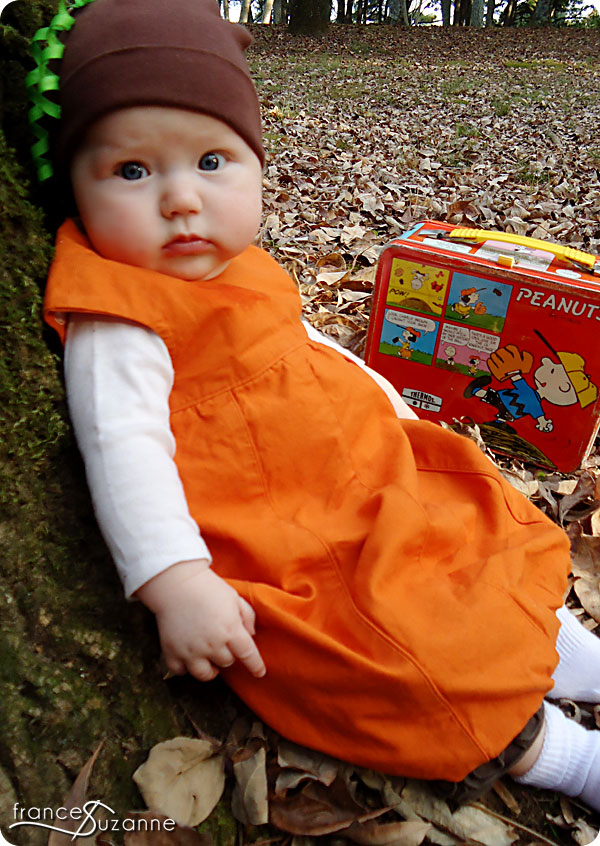 To do this, we made subtle ‘pumpkin section’ divisions to create a pumpkin appearance. 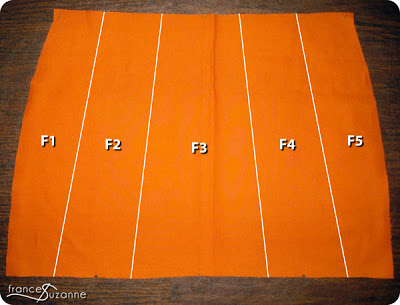 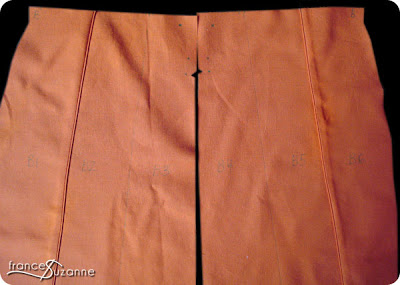 The first step was in the cutting phase. We added 2 inches (total width – to do this, add 1 inch to the fold) to the front bubble skirt portion and 1 inch to both back pieces (add to the center, straight portion), for a grand total of 4 inches width increased around the entire skirt. This was to account for 1/4 inch seams for piping…with 4 areas of piping on the front, and 4 areas on the back. This cutting increase was ONLY done on the outer bubble skirt layer….NOT the lining portion.
Then, we marked our piping lines, using a fabric marker. This line was to show where we wanted the finished piping on the garment. The photographs below will walk you through the piping process between back pieces, B2 and B3. 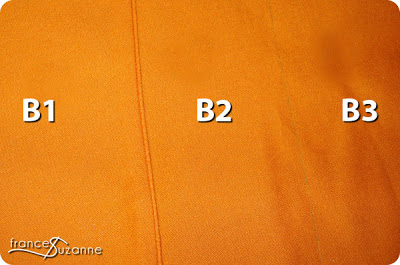 We drew a parallel line from the piping line 1/4 inch to the right, allowing for the seam.

Cut along the 2nd line drawn – splitting B2 and B3 into two separate pieces.

Pin the piping to the right side of B2 and stitch your 1/4 inch seam. Reattach B3 (right sides together with B2….piping will be sandwiched in the middle). 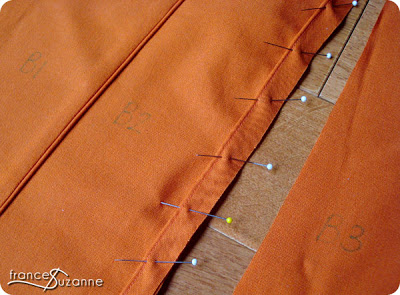 Our feeble minds only allowed us to do the above steps ONE AT A TIME….we did NOT cut all the sections apart in the beginning. On both the front and the back, we worked inwardly – toward F3 (on the front) and the center seam (on the back).

Once the back piping sections have been attached, repeat process for the front of the bubble skirt. *Be careful to work inwardly, toward F3 from F1 and F2, as well as F4 and F5. 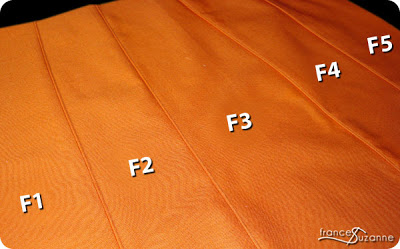 When it is time to attach the bodice to the skirt (as stated in the directions), please NOTE: piping doesn’t like to be gathered. So, we gathered the skirt portion between ‘pumpkin section’ pieces: gathering the fabric between each piping division. Past that little snafu, the pumpkin assembly went smoothly. 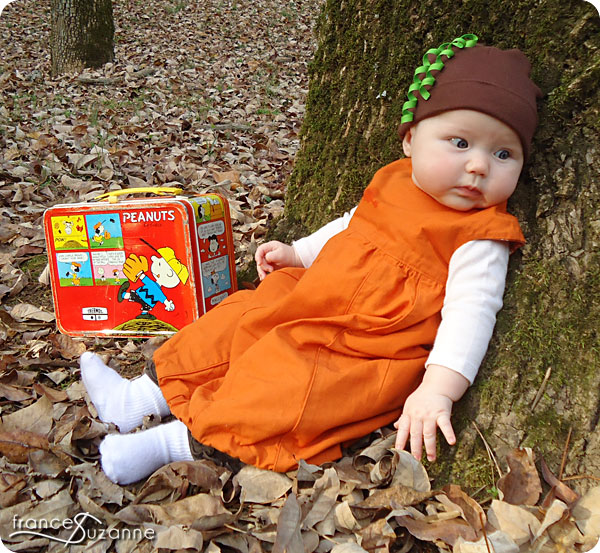 Here’s a little sneak peek at the paired lining we chose for our Great Pumpkin.

We couldn’t find a cream colored shirt for CL, so we bought a 3-pack of onesies and tea-dyed one to a cream shade. 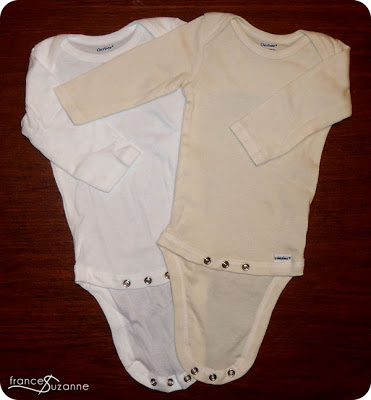 To keep the Great Pumpkin theme going, we bought a brown knit cap and added a green curly ribbon tendril on the top. 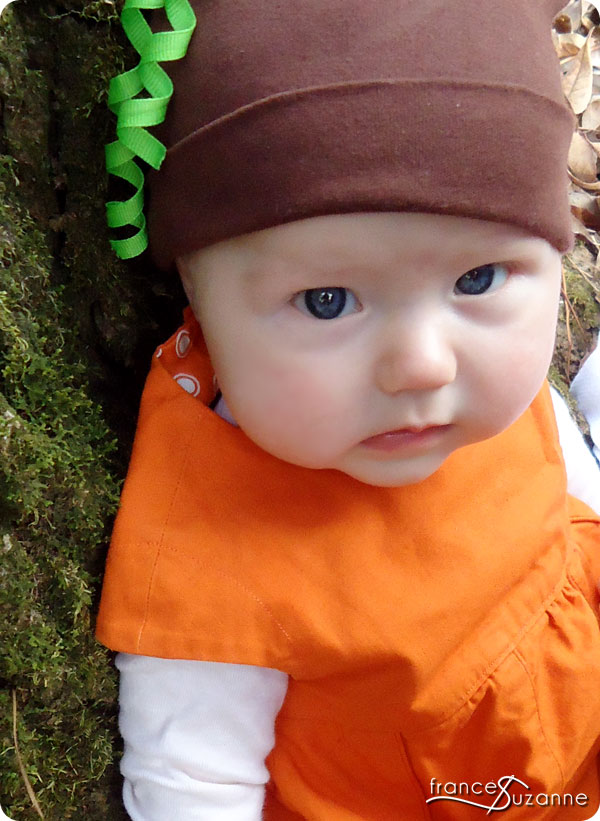 Easy to be removed….easy to change back to a typical, fall outfit. 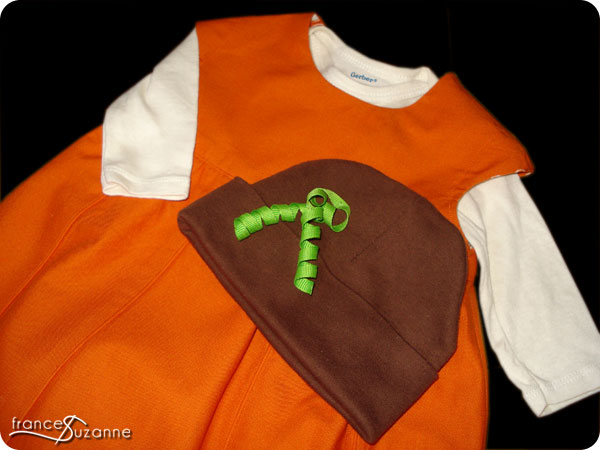 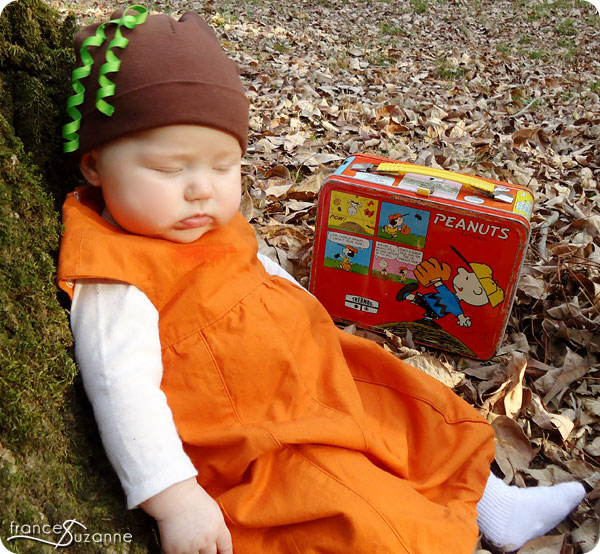 Ahhhh, but that is just the beginning of the ‘Peanuts Gang.’
“Charlie Brown, who will be featured next?” 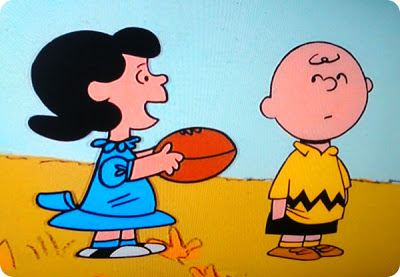 “None other than my little sister, Sally, of course!” 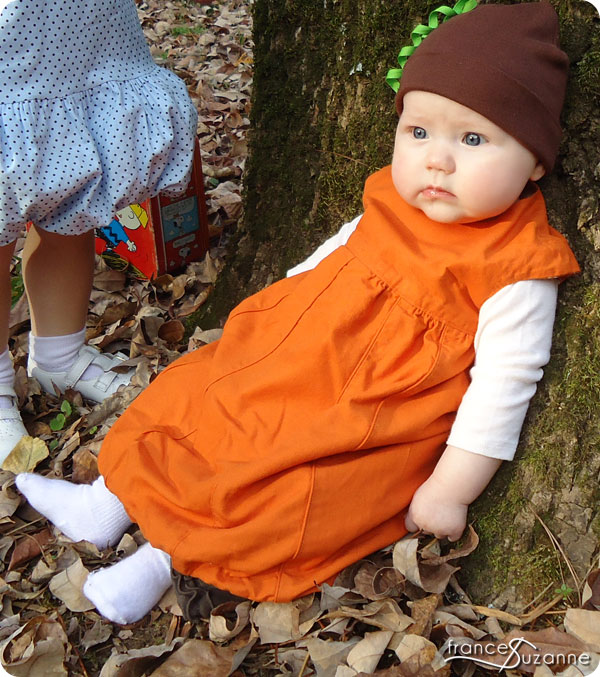 
So darling! The piping would be such a fun touch in an opposite color as well.