Ultimately, Sally was the reason we even agreed to make Halloween costumes, after adamantly saying, “Halloween costumes are a job that is too big for us”. So, while a moral of the story should come at the end….Ours is: “NEVER SAY NEVER!” 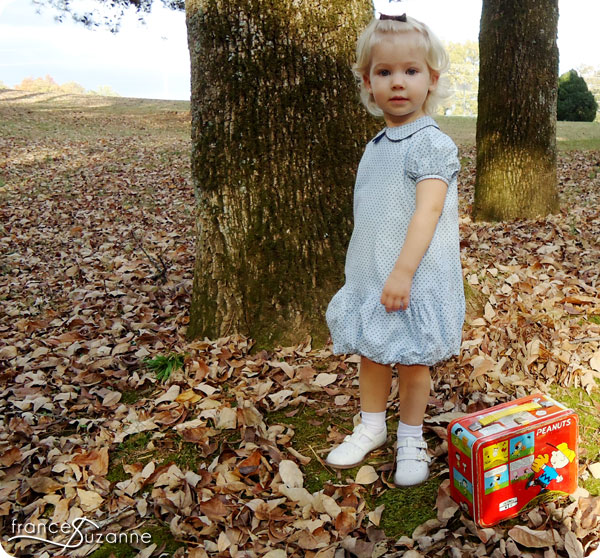 Maybe it was Sally’s blonde hair. 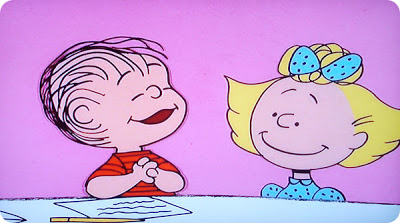 Maybe it was her curls on the ends. 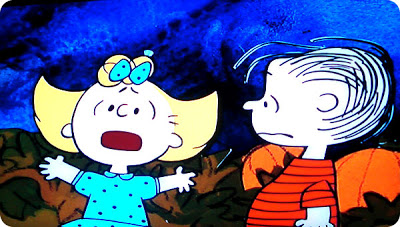 Maybe it was because we think EA resembles Sally. 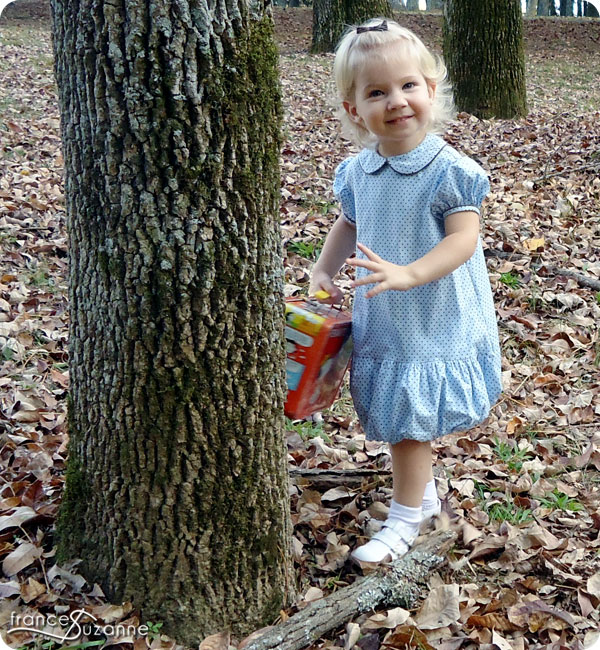 Maybe it was because we found the perfect fabric in our stash
(and were in a quandry over what to make with it). 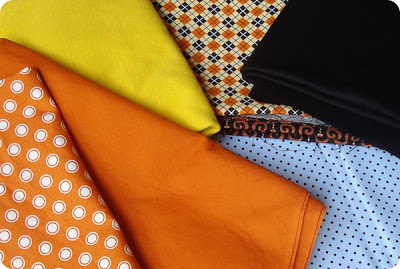 Maybe it was because “Aunt Emmy” had the perfect lunchbox from her childhood. 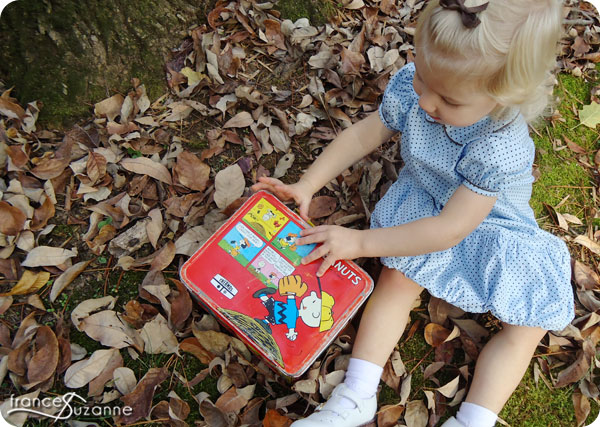 Maybe it was because Sally’s “costume” could be worn again. 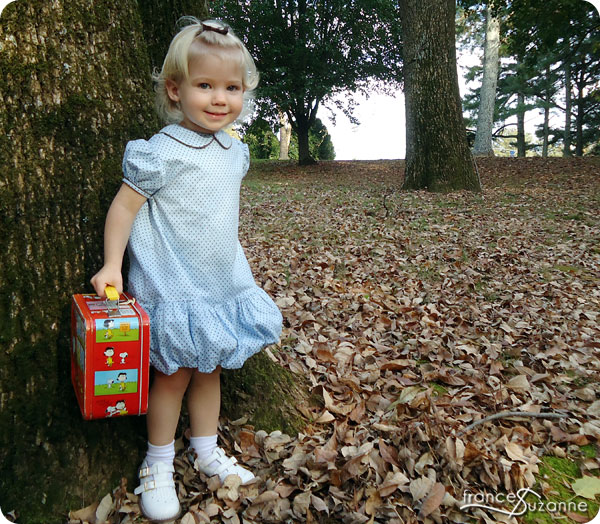 Maybe it was because making something that involved a bubble was just too alluring to us. 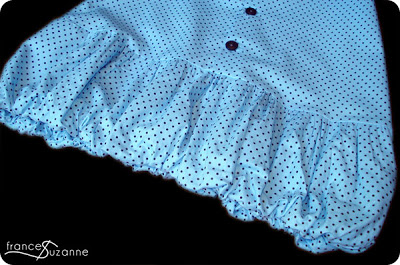 Or maybe it was because when the pieces fit so neatly together,
we just couldn’t tell our “baby” sister, no. 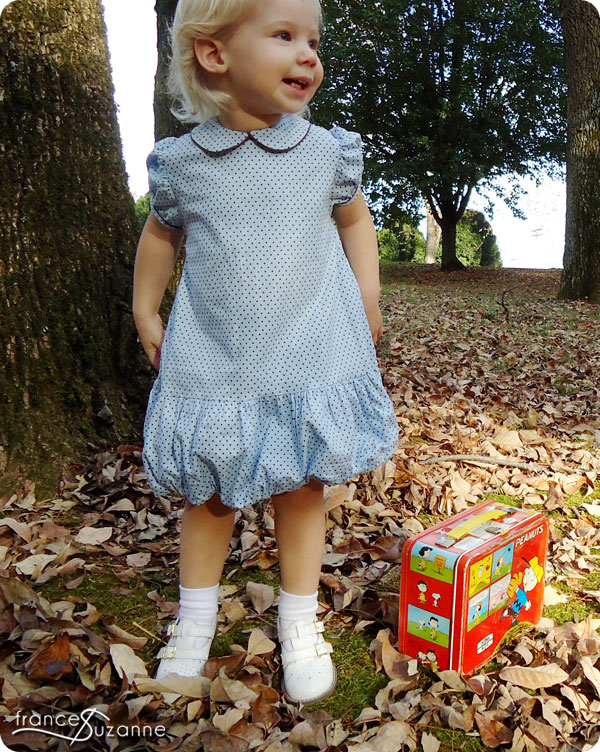 To make Sally’s costume, we began with the Children’s Corner pattern, Carol. 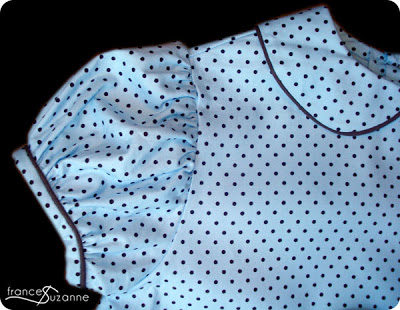 Instead of leaving it full length, we shortened the dress to approximately hip length. Once this was done, we simply cut 2 rectangles as long as our fabric would allow and made the height to hit EA at about the knee plus seam allowances. Then, we used the technique that Liesl used in her Oliver + s, bubble dress pattern. The lining was cut 1/2 inch shorter than the outer skirt, and elastic was added for the ‘bubble effect.’ 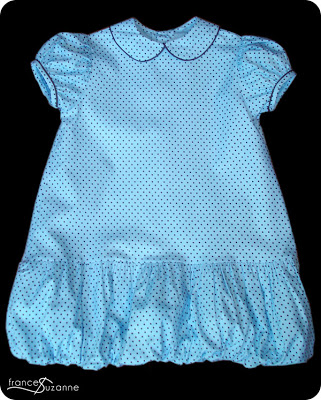 While, it ended up being a tad big; overall we liked the concept and would like to try it again with some minor adjustments being made (narrowing the Children’s Corner Carol dress a tad more). 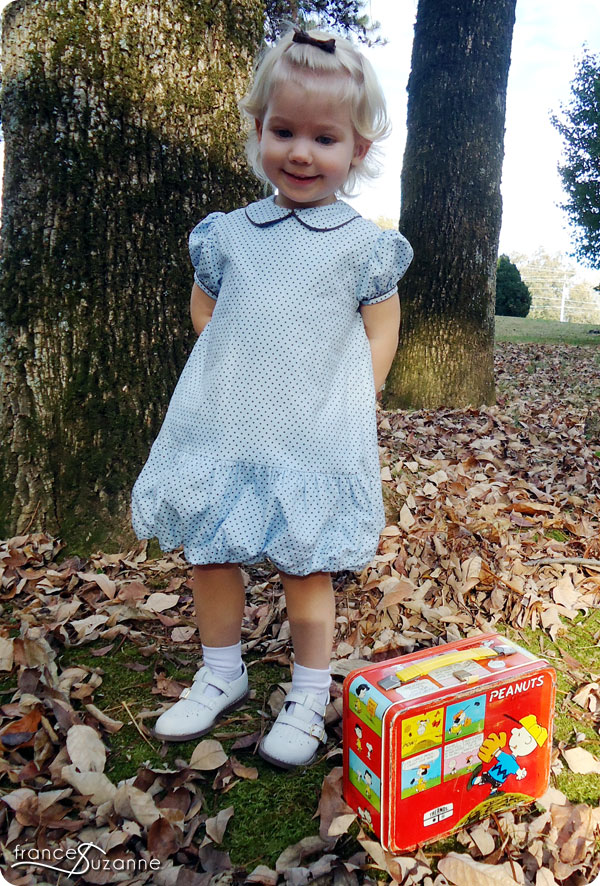 Although Linus and Sally never actually saw the Great Pumpkin in the movie,
in our version, Sally did. 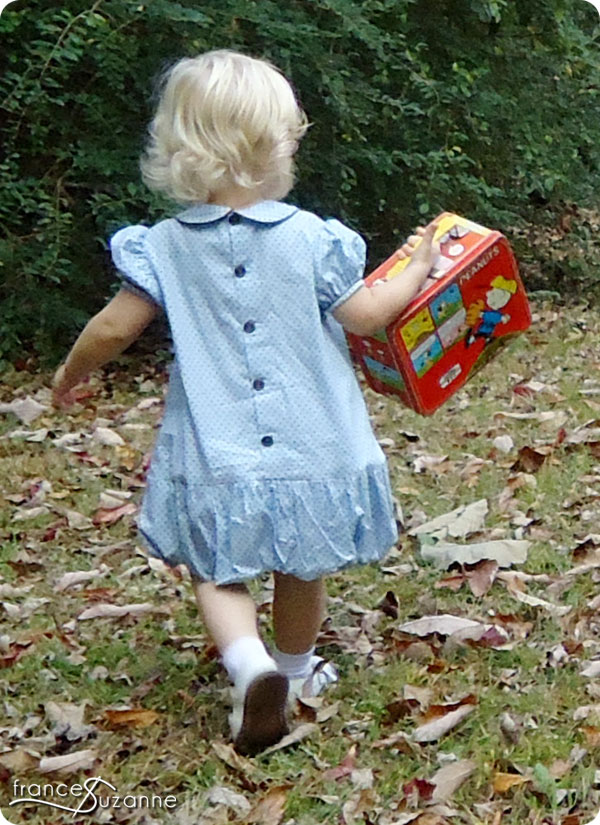 But not before finding…. 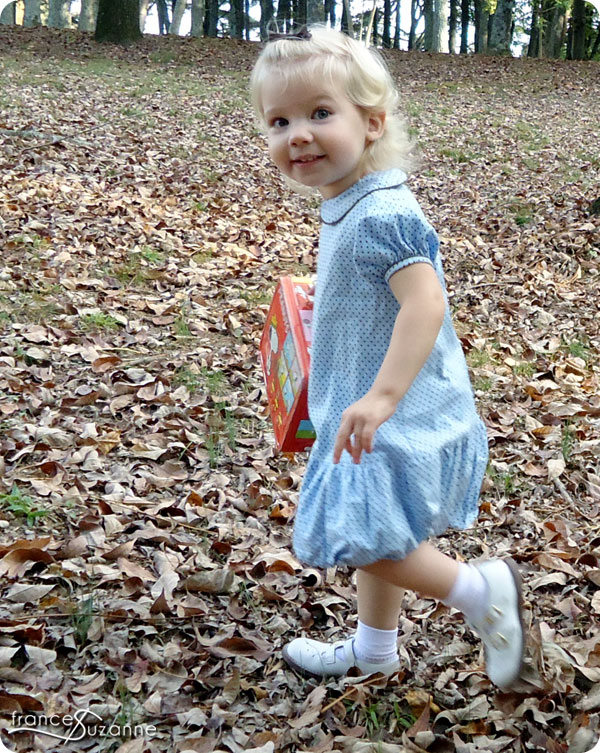 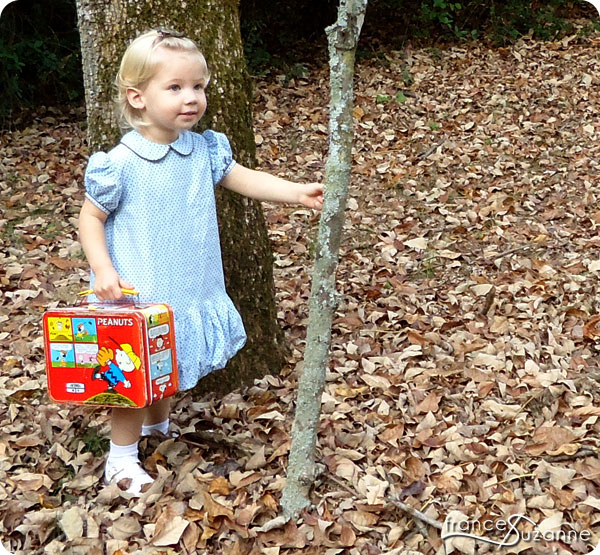 And although she thought this Great Pumpkin was a wee bit small to live up to such hype…. 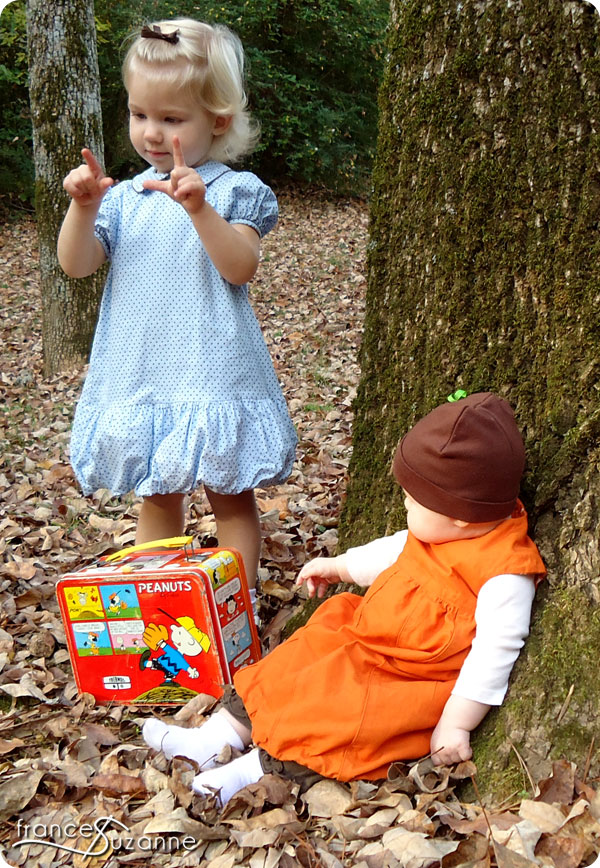 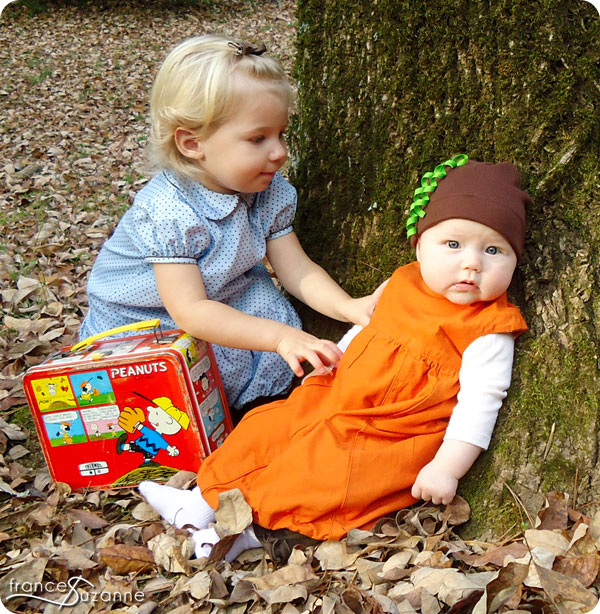 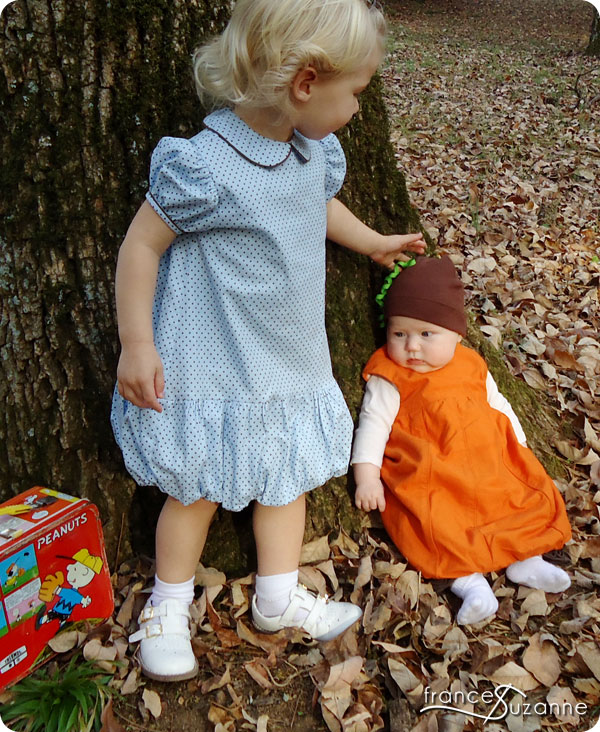 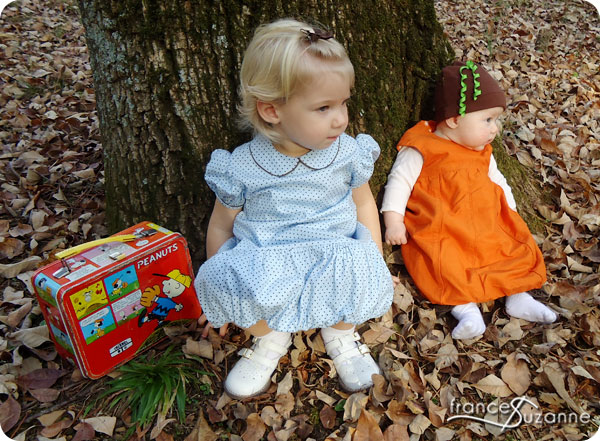 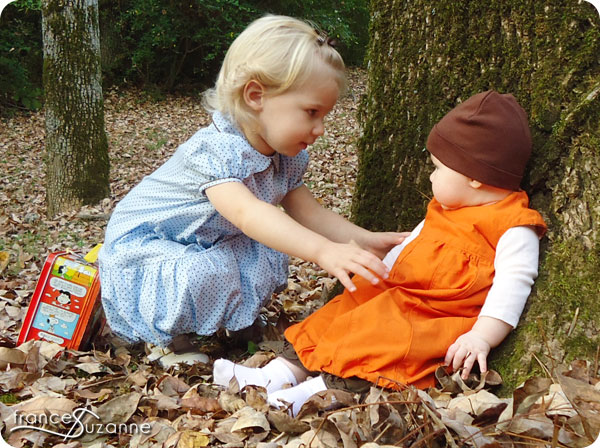 The rest of the Peanuts gang was completed by Charlie Brown {yellow shirt painted with fabric paint} and Peppermint Patty, who as you may recall had a crush on good ‘ole Charlie. Poor “Peppermint Patty” didn’t decide who she was going to be until the 13th hour, so she missed out on costume assistance! Truth be told, she would have been left out in the cold anyway (since we sewed until the wee hours of the morning to finish the rest of the gang).

Then, we ‘crashed and burned’ after completing the costumes….. 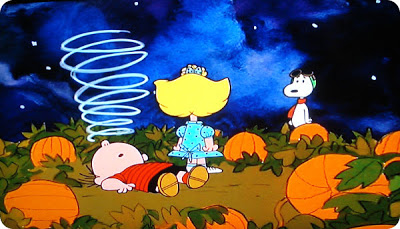 Now, all that is left to do is our Happy Dance and sing, “Yea, yea, yea, Halloween is through!” 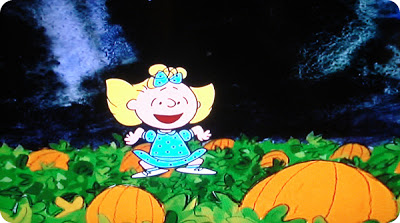 And check the 50% off racks for next year’s Halloween attire!!


I love it! That is such a sweet dress, and I love that she can wear it again after Halloween is over.


Wearability after Halloween was the only selling point to our sewing this dress :)!


Wow! She sure looks lovely and adorable in that dress, not to mention that it looks comfortable as well!


Your children are both so adorable & I truly love the outfits. You did a wonderful job!!