Mother Goose Would Be Proud…EVENTUALLY {Part I: Ring Around the Roses} 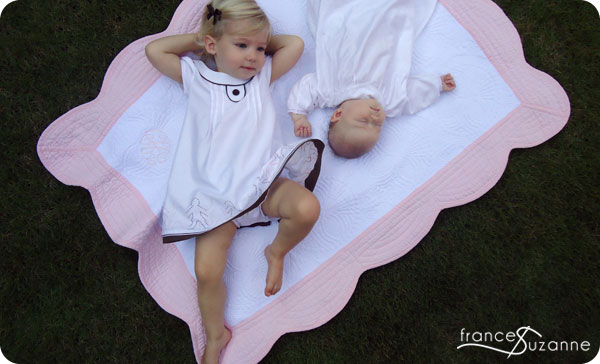 Okay. We’ll say it. When the Project Run and Play, season 5 challenges were announced, “White Sheet Challenge” instantly became our favorite one!! There. We said it. Now, as Paul Harvey would say, is ‘the rest of the story….’, or at least “Part I” to THE saga…

For our ‘white sheet challenge’, we decided to go for a simple, clean, and classic look with emphasis on details and handwork. Nursery rhymes were a staple in our house while growing up, and our sister has continued that tradition with our nieces. So, what better theme to center this challenge around than some good ol’ nursery rhymes? And, not wanting one of the girls to feel slighted, we opted to complete a nursery rhyme pair for the girls….

Our starting point was the nursery rhyme, Ring Around the Roses, for EA. We had just completed an Oliver + S Family Reunion dress, and decided this pattern would be perfect for our nursery rhyme vision. Since the challenge was all about using a white sheet for the majority of the outfit, we wanted to keep it as authentic as possible. So we opted to dye a portion of the sheet cocoa brown for piping and bias tape accents. This was our first dyeing experience and thought we were ‘oh so smart’ for not tackling a large dyeing process for our first time. WRONG! We dyed it, rinsed it, set it with vinegar, washed, and dried it. Then, we assembled the dress, and decided to set the color overnight one more time before the embroidery details were added. At 4:30 AM the next morning, it was discovered….”HOUSTON, we have a problem!!” Yes, the precious outfit was stained through and through. 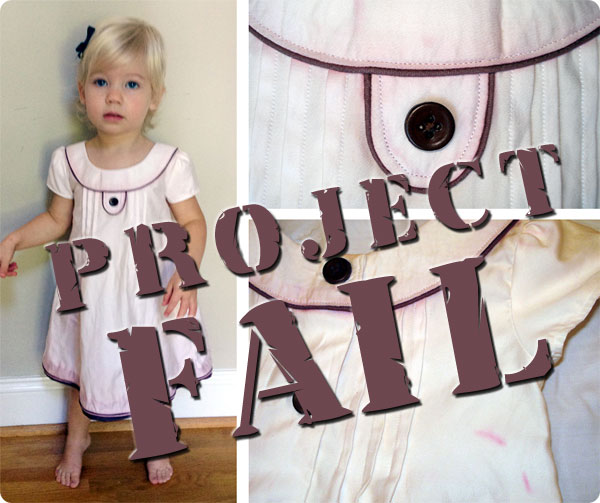 Even Voldemort had left his curse on it!!! No amount of scrubbing or elbow grease would fix this problem. 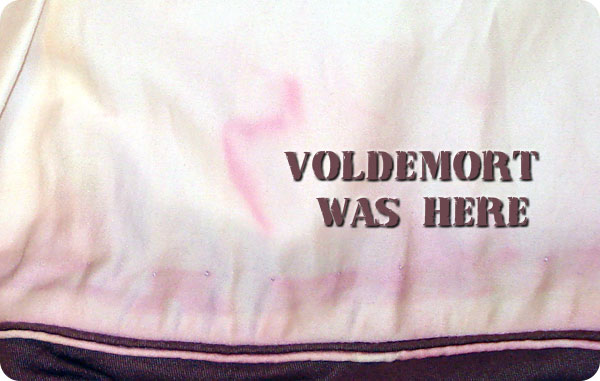 If this hadn’t been our favorite outfit planned for Season 5 of Project Run and Play, we would have ‘thrown in the white sheet’, so to speak, and moved to another week’s challenge. But, no, no, no. We wanted to make this work! And, like Harry Potter, we survived the curse….and….

Played the “Glad Game” with our recent failure.

Here’s all the things we were thankful for with our “Dummy (and we do mean ‘dummy’) Project”:
1. Buttonholes were a little small….adjustments could be made.
2. Lost a little blood (sweat too, but no tears) on the garment. Happy for a re-do.
3. Embroidery had not been completed. HALLELUJAH!
4. The deadline was not upon us. We had time!
5. Our model could try on the “Dummy Version” (see photos above), giving us the opportunity to double check fit, length, etc.
6. A king-size sheet gave ample material for a re-do outfit (and many, many more)!
7. We forgot our labels in the 1st version, and could get them in the 2nd attempt.

A trip to Hobby Lobby ensued for the brown accent fabric. A few other ‘necessities’ jumped into the cart. Let’s just say, we ate our worries away that evening while cutting more brown bias, as well as another white sheet outfit. 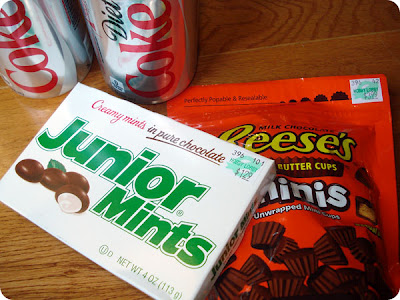 Then, we sewed like mad….before and after our ‘paying jobs’…any time we could find a few spare moments. When we made the deadline, let’s just say there was some toe-touching going on!

We stuck to the Oliver + S Family Reunion pattern, with minimal changes. We used the 12-18 months pattern, but used the 18-24 months length. And, the final outcome was this: 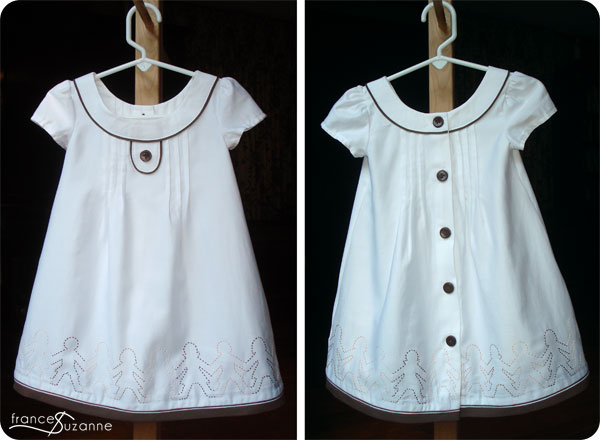 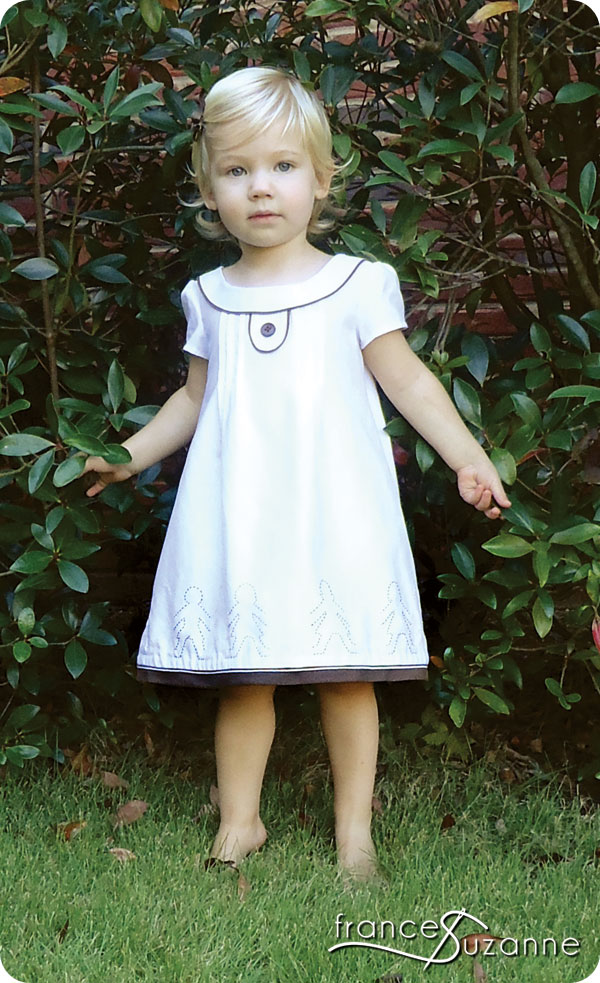 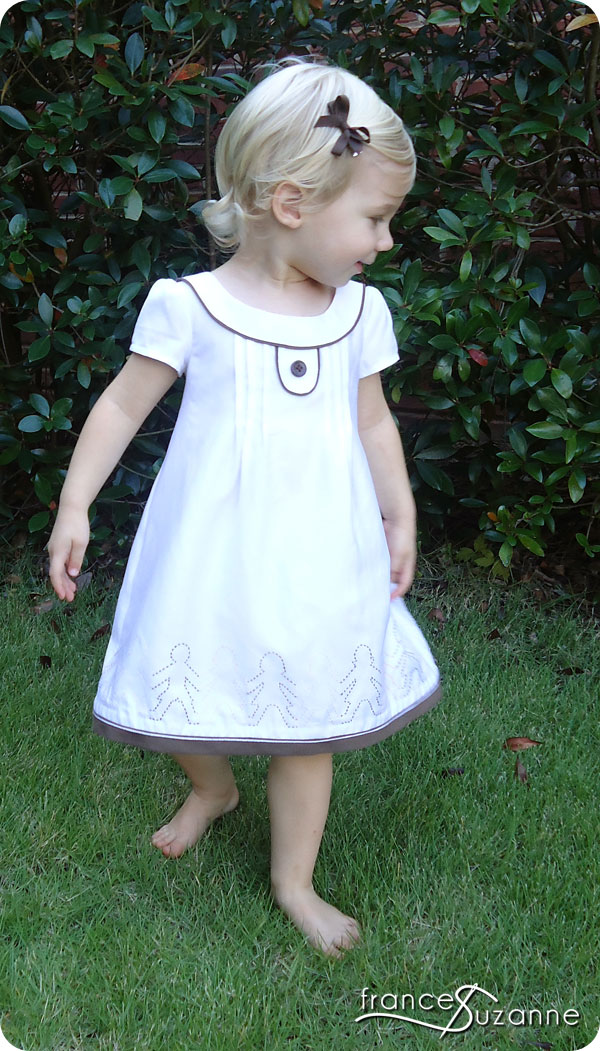 We have a fondness of piping details on garments, and did a first on this outfit: double piping around the hem. 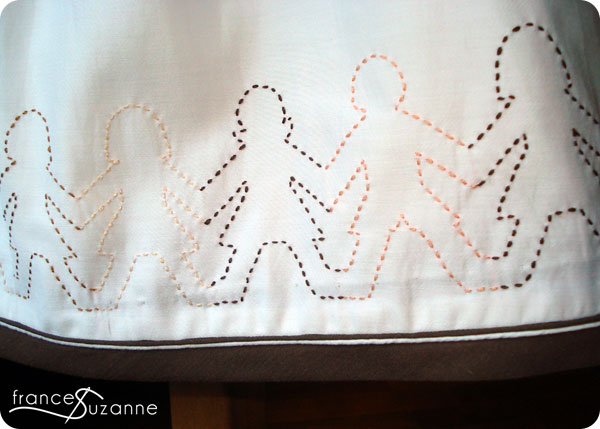 We also added brown single piping around the yoke and button area of the dress. Then, we added a brown bias strip to finish the dress, instead of using the hem facing instructions in the Family Reunion pattern. 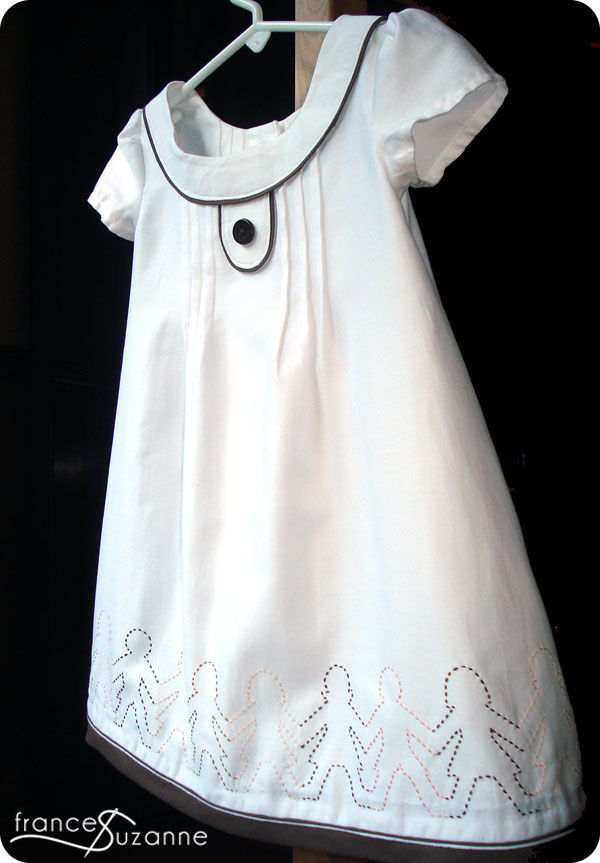 Paper doll children were traced above the double piping detail. 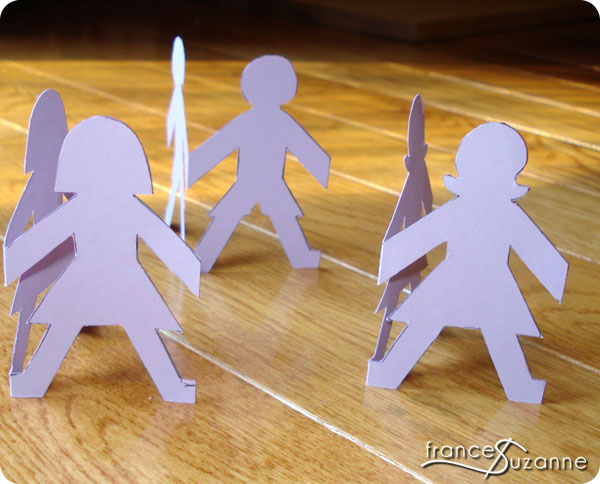 TWENTY handstitched, multi-cultural children joined together for a friendly chant of “Ring Around the Roses.” 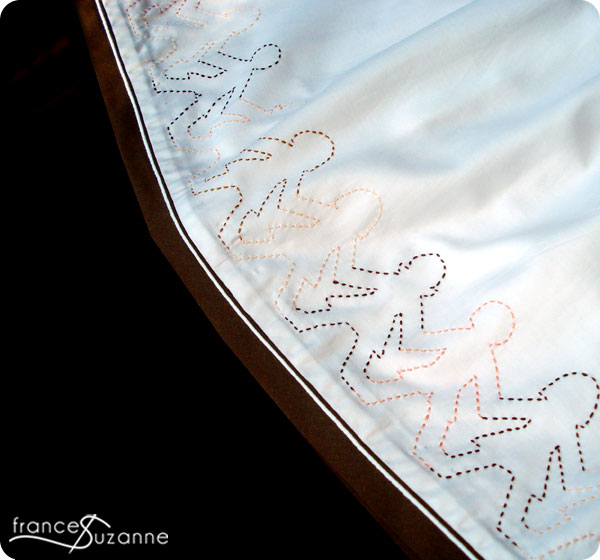 Sadly, a multi-cultural pack of DMC doesn’t exist (like Crayola crayons),
so we made up our own. 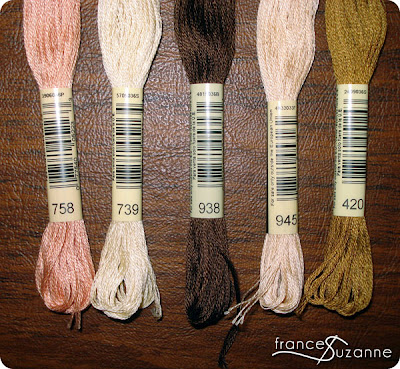 We had seen No Big Dill’s paper doll skirt, and had wanted to do something similar to it using handwork/embroidery. We had previously tried some straight stitching, hand embroidery on an outfit after seeing Gail’s {probably actually} sweet skirt. But, no shapes or figures… UNTIL NOW! 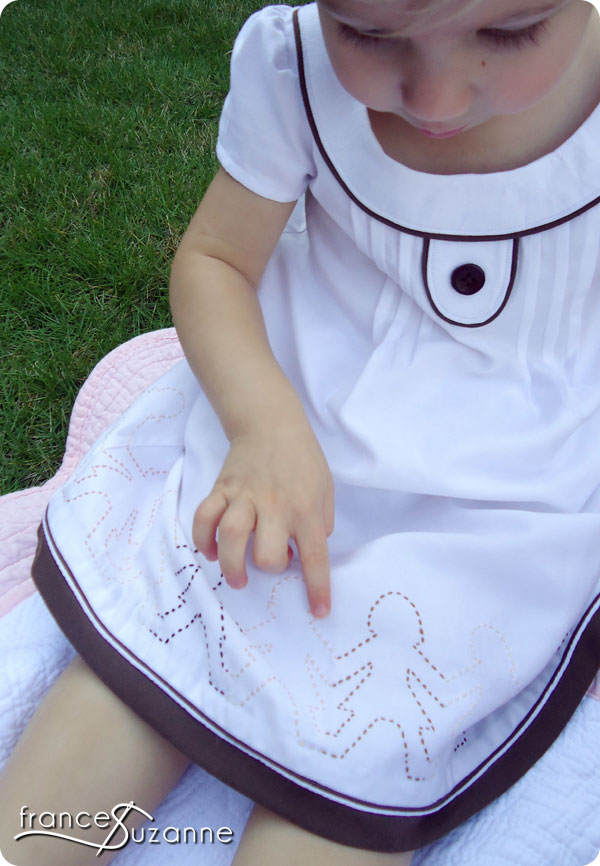 EA counted and made sure everyone was present before the “Ring Around the Roses” chant began! 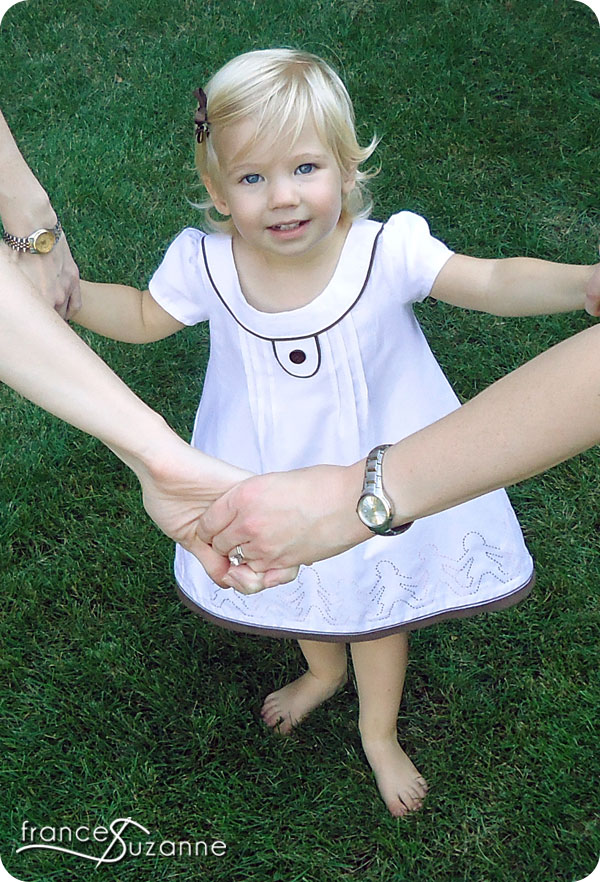 Are you ready for a little “Ring Around the Roses!?!?”

Although we love hand embroidered details, we do not pride ourselves in our embroidery work, nor do we claim speed as an asset in doing handwork. The handwork alone on this dress took approximately 15-18 hours. 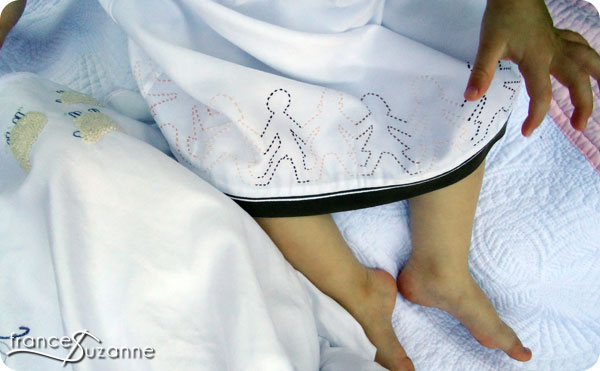 So, yes, we are S.L.O.W. Redoing the dress was not in our original time frame, and another white dress was waiting in the wings….making a frantic week!!

I have a feeling once this project is completed, “we’ll all fall down” just like those children. 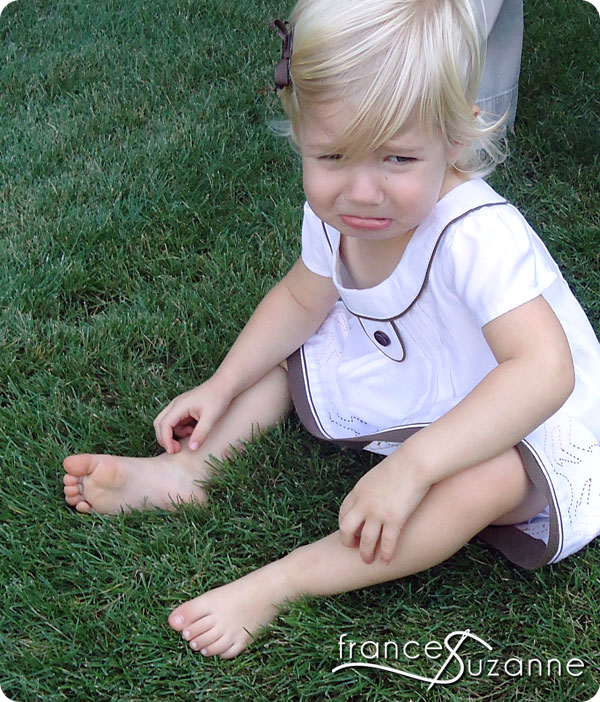 But wait…..Little Bo Peep is still looking for her sheet sheep!!! But that, my friends, is “Part II” of THE saga…. 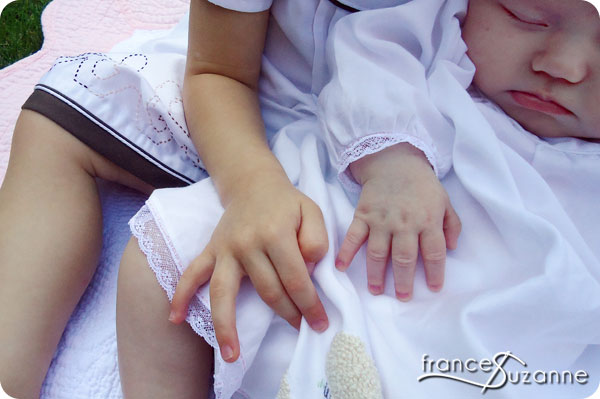 
Boo for the dye leaching on to the dress, but I love the finished dress. Those handstitched, multi-cultural children are wonderful! You two are so clever.:)


I really love you decided to do a chocolate accent. Oh but for the die to ruin such a beautiful creation was hard to look at. Glad you didn’t give up.


Too bad about the dye troubles,hey,you live and learn. The final outcome though is excellent! Love the piping accents and your hand stitching is perfection. Each stitch appears to be equal in size. Do you use Tiger Tape as a guide? The dress fits well after your sizing adjustments. Once again, nicely done.


Yes, we lived and learned that dyeing is NOT for us!! Tiger tape? Never heard of it, but will be googling it shortly. You always seem to be educating us. Oh, and thanks for the helpful sizing hints. You and Cindy both were extremely helpful in our fitting questions.


Very cute! I nearly shed tears for you seeing the dye leaching! Ack! So glad you pushed through and tried again! All the details (piping, embroidery, etc.) make it so extra special.


Glad you felt our pain!!!! We WOULD have cried if the embroidery had been done….


This such a cute dress! I love it!


You are so very talented! I love this and your Twiggy dress featured at Shwin&Shwin! You rock, my dear! PLus, you have like the cutest models EVER.


Thanks!! We’re a couple of biased aunts :). So glad you are following along on our blog now.


Stupid dye:(. I hate when good clothing that you worked on so hard get ruined.

The second dress come out fabulously and I love the little children stitched on the bottom!


So sad about the dye. That’s totally something that would happen to me. LOVE the finished result!!! I will have to add piping to my next family reunion dress! (love that pattern btw). The embroidery is gorgeous.


Glad (not quite the word I’m looking for…really) that someone else had an eye opening/chocolate eating experience with this challenge:) I must say though that both your dresses are just exquisite! Such detail and beauty! And how do you do double piping…please share!


Refreshing maybe??? Not that we’d wish this on anyone, but reading your blog eased our woes


Oh my word. I love this little dress. So sweet! And your hand work is the perfect little detail.


You had me at the embroidery….these dresses are the sweetest things ever!

(And the sewing impeccable ladies!!!)


Oh, I can’t believe your first dress was stained! That’s horrible! But the second version turned out so perfect, it must have been fate. And what an adorable model you have!


oh my goodness, another gorgeous number. This is FANTASTIC! Well done!!! Love love love it!


Holy cuteness Batman! What a gorgeous dress on an adorable girl. You are getting my sewing excitement up! Popping by from Naptime Crafters…check out my wrapping paper at http://thehandleyhome.blogspot.com/2012/09/bee-wrapping-paper.html if you get a chance!


This style of dress is too cute! I love it! How creative to create this little dress based on a nursery rhyme! (I do things like your dye fail all the time!!!)


Congrats on your win! Well deserved


Congrats on your PRP win! I was so hoping your dress would win – clearly I was not the only one! How exciting:)


oh this is so darling!


Thanks everyone for those sweet, sweet comments. You have truly made our week… I mean, month … Maybe even year!!!


Ok so this is like a year late but if you still have that first dress that got messed up with the dye then you can fix it. Maybe then your other little girl can get some use out of it and it isn’t a complete waste. It will give you a chance to practice with dye again too. Just dye the entire dress a light maroon-ish color. I’ve had beautiful clothes for my girls before that got spit-up stains on them and I just dyed them with something darker then the stain color and it’s like a brand new un stained outfit again. I just washed it several times by itself in the wash and then washed it with only dark items (like jeans) the first couple times I washed it. Then it was fine to wash with whatever.


How did you do the double piped hem?