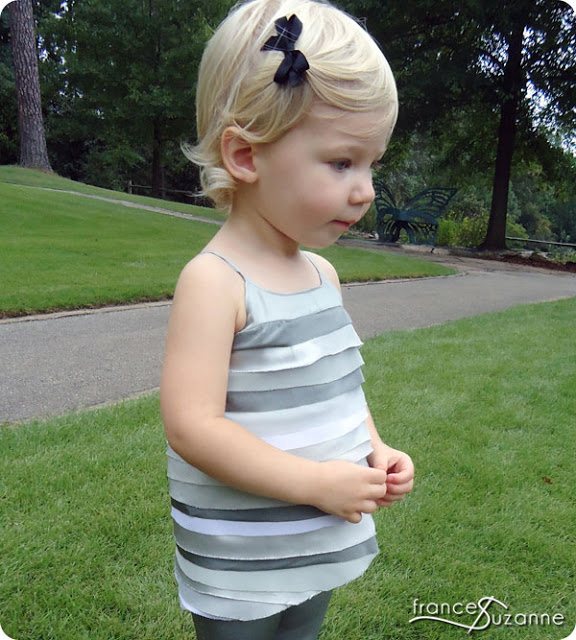 Okay…if you need to be reminded: We get pretty pumped about another season of Project Run and Play! WHY? Well, it is because it pushes us to new, different, out-of-the-box concepts. It gives us a ‘free ticket’ to attempt things out of our comfort zone, we receive such sweet comments via our flickr feed, and we like a challenge. Technically, our day to day sewing projects are a challenge for us…..it’s just a matter of how BIG of a challenge each becomes! 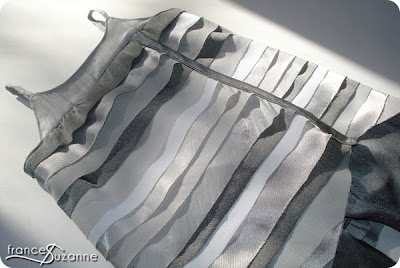 On challenge 1, we hit the ground running on ‘attempting things out of our comfort zone!’ And, the final modeled result had us in stitches….Her daddy called her a “Cosmopolitan Girl,” while we compared her to a “Flapper.” 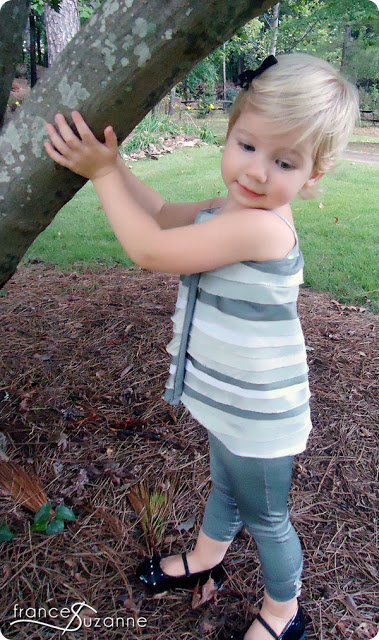 Here are some new things we attempted during the course of this challenge:
*drafting a pattern (much more than we’ve done in the past)
*sewing with non-traditional children’s fabric
*sewing with UNfinished bias
*working with stretch knit
*tracing a pair of her leggings to create a new pair using this tutorial by dana made it.
*ruching

How this project came to be:
It began with a Project Run and Play Challenge: remix No Big Dill’s A Very Biased Skirt. We discussed the possibilities, planned other contestants / sew-along friends’ outfits (hypothetically, of course…but it sure is fun imagining what others might do!), and then decided it was best to focus and plan ours. A sketch ensued, fabric was bought (eerily similar to No Big Dill’s fabric selection – we couldn’t contain ourselves), and a few freak-outs / seam-ripping moments occurred before the final stitch was sewn. 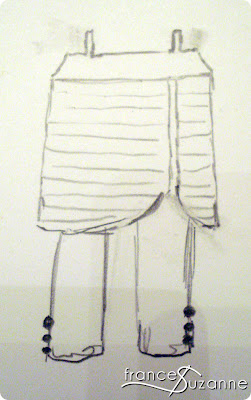 We drafted a pattern to make an asymmetrical, wrap-skirt bodice swing top. 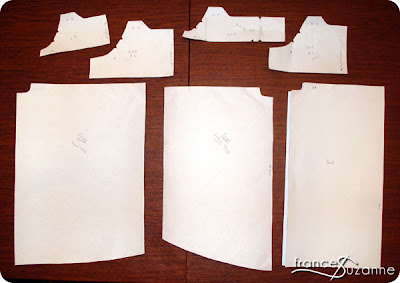 The early stages of it looked more like a wedding crasher mummy in party-garb. Given the fabric selection, we wanted to give this outfit a little ‘edge.’ Accents of bling were placed on the ruched leggings, as well as the back of the narrow yoke. 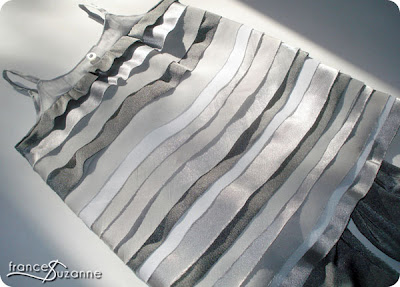 The “Model Test”: It fit perfectly (and we all breathed a huge sigh of relief)!! Since it was NOTHING like we had ever sewn before, we howled with laughter as our little ‘Flapper’ strutted her stuff. And strut she did! Guess she thought she was pretty snazzy…. 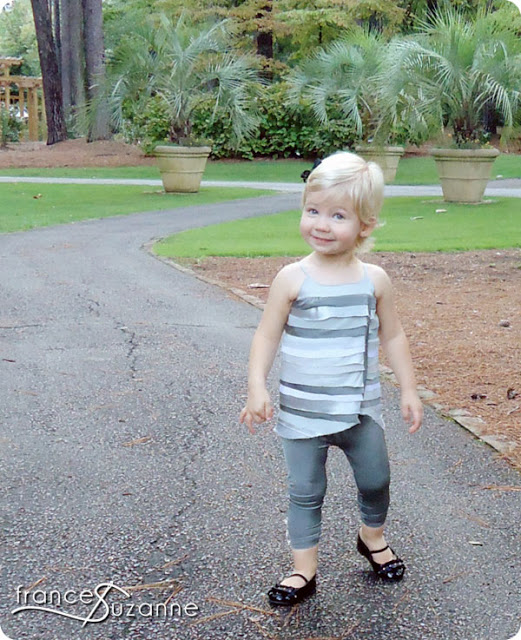 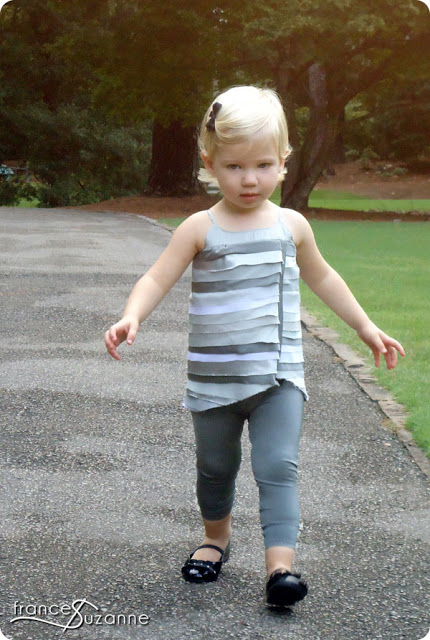 The UNfinished bias still makes us cringe a bit, and placing bias strips in a non-patterned way was difficult! We were pleased with the outcome of the garment, but still giggle over the fact we actually made something of this style.

We were able to take a quick trip outdoors for some photos before the rain drove us indoors once again. 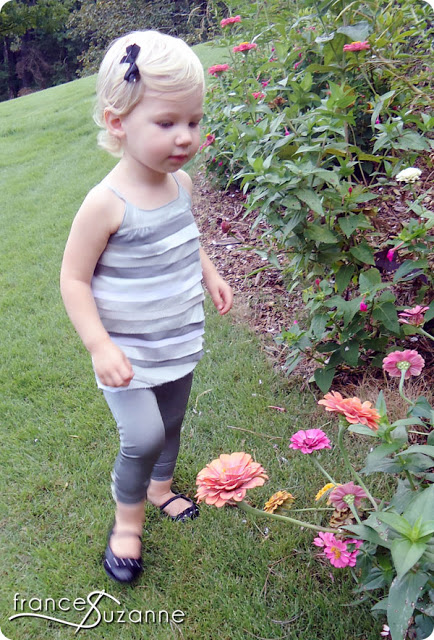 Things we learned from this experience:

No matter how many measurements are taken, there is always room for a few more! And, yes, we succombed to M&M bribery for the measurements we snagged….Ultimately, we thought the swing top would fit her mid-thigh, but it barely covered her backside. 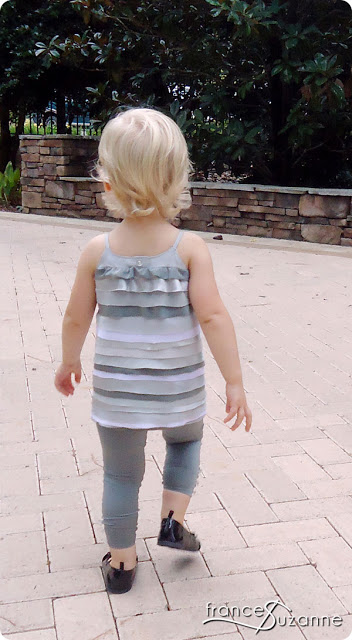 Lots of overlapping bias strips make for a heavy outfit….especially for a little one. 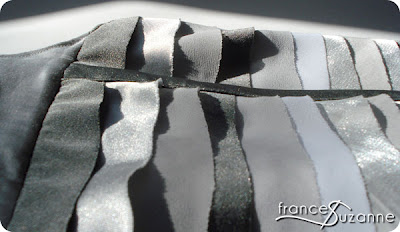 Stretch knit is s-t-r-e-t-c-h-y (okay, we technically knew that, but WOW). We want some adult versions of these leggings!!

The ruching didn’t work out as anticipated. The gathered appearance of the legs wasn’t noticable once it was said and done. Still, the bling added enough of an accent for this garment. 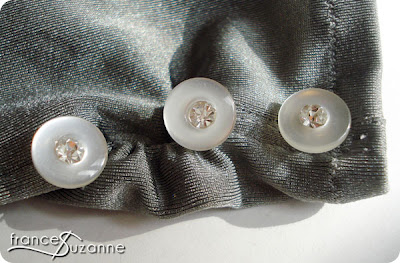 We have a greater appreciation for each entry in this sew-along challenge. The time/effort expended in working with piles of bias is applaudable!! Kudos to all those taking the challenge in the sew-along flickr pool!! 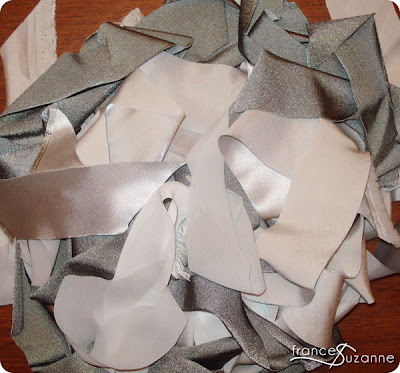 Now, we are just wondering…. 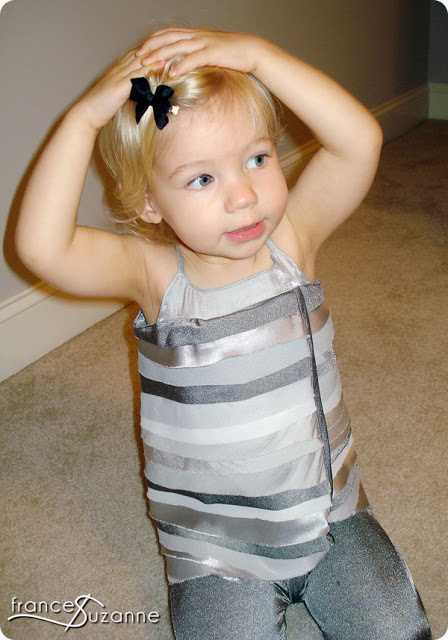 what YOU have come up with….


LOVE IT!! You girls have done it again. And your model….just too cute! I was holding my breath all weekend long waiting for this post..this reveal..and it was well worth my impatient wait! Bravo Emily & Ashley. Bravo!!


You are too, too kind (as always)! This post was painful to publish because it went against our normal ‘look.’. We are ducking our heads a bit lower as each fantastic entry is posted on the Flickr sew-along group….


You all did a fabulous job! The end result is super cute and very chic.:)

I totally skipped this challenge as I couldn’t come up with a twist on the bias strip idea that got me excited to create/sew.


Awwww, Cindy…. We were afraid you might skip this challenge!!! Hoping to ‘see’ you for round 2! Maybe???


It turned out really well – you could always add something to the bottom if you wanted it slightly longer, but it would also be cute paired with jeans or a skirt as a top. I too ‘cringed’ at the thought of UNfinished bias – I had no faith that it wouldn’t completely unravel during construction (even though I know the nature of bias), and I don’t think I’ll ever wash my little romper – just too scared ;op I’m going to make something else down the road with a sturdier and more trustworthy fabric – like knit, or jeans – after PR&P is all over that is ;o)
~Suzanne (http://winterwonderingswanderingswhatnot.blogspot.com)


Well, we LOVE bias…..to sew piping!! Guess we should have made an outfit from piping…. :). That would have fit our comfort zone much, much more!


So sophisticated yet age appropriate! I love greys mixed like that.