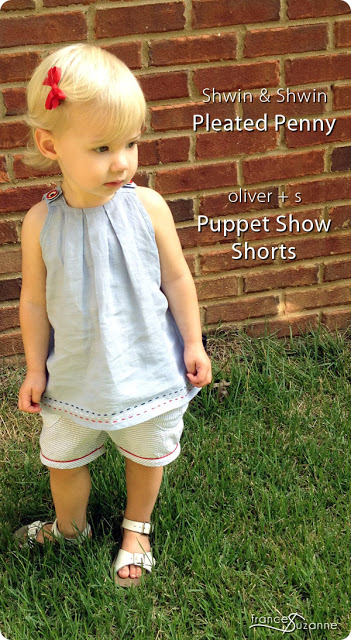 A few weeks ago, Shauna over at Shwin and Shwin, opened up a wonderful opportunity to her blog readers: test her newest pattern {the Pleated Penny}, photograph the finished product, and complete a survey about it.﻿ Approved tester or not, anyone could download the free pattern for a few weeks, before she pulled it off and began to sell it here at Shwin Designs. 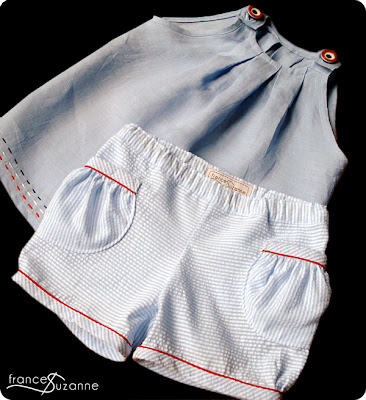 OH. WOW. We couldn’t sign up fast enough for this!! The rounded yoke with pleats sold us on the pattern at first glance…and the sweet, casual nature of the pattern just drew us in.  We had never “tested” a pattern before, but felt as if we’d be excellent candidates for the job since we rely heavily on pattern instructions as we sew. Well, the rest is history as they like to say….we became a pattern tester, and are here to reveal our finished product which by the way fit PERFECTLY! 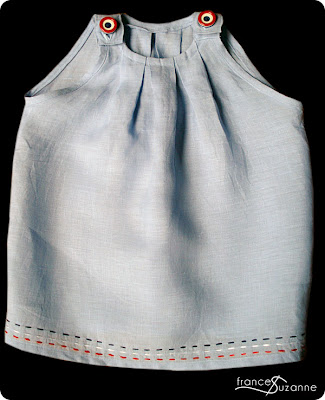 The 4th of July was quickly approaching, and we had these wonderful vintage buttons itching to be used…

The Shorts on the Line sew-along was also gearing up, and we knew we wanted to participate. Pairing some fabric we had on hand, we opted for a subtle ‘holiday’ outfit that could be worn – holiday or not. 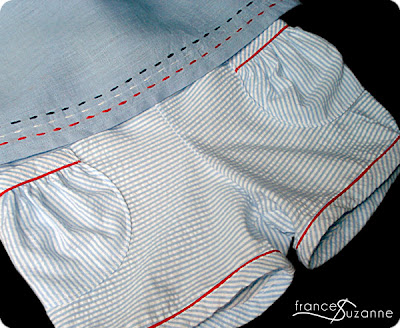 The only addition we made to the Pleated Penny Top was the red, white, and blue topstitching placed around the hem of the garment. We felt as if this tied the outfit together, pulling in the buttons from the top and accenting the piping details from the shorts. 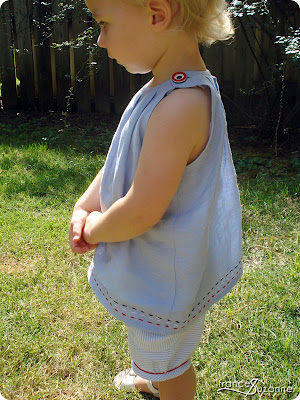 As far as the shorts go…they were F.U.N. to plan, make, etc. from beginning to end. We used the Oliver + S, Puppet Show pattern, added some accent piping, and played with the position of the seersucker stripes to add details and interest. We had never sewn seersucker, although it was on our mental ‘to do’ list at some point. Most striped garments run vertically, but we decided to go against the grain and have the main part of the short stripes run horizontally. The pockets and waistband offset it with vertical stripes, while the leg bands and pocket bands maintained a diagonal stripe effect. 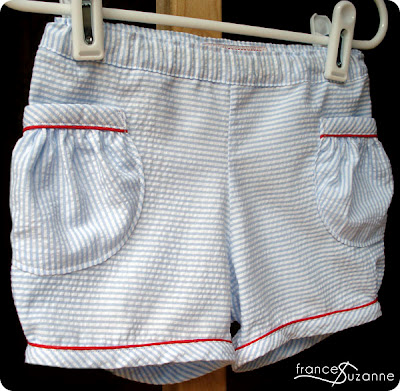 The feature enjoyed most by our niece were the POCKETS. We had made other outfits with pockets for her in the past, but this was the first time she had actually honed into them and thought they were ‘it.’ It was hysterical watching her run around with both hands shoved down in them, all while trying to maintain her balance. 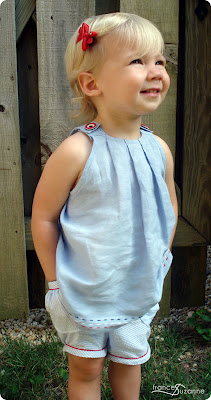 We were so pleased with the finished product, we opted to use this outfit as our niece’s attire to see her newborn baby sister for the first time on the 4th of July. We weren’t just tickled pink….we were tickled red, white, and blue!


Cute, cute outfit and your model is a beauty too! Welcome to her baby sister.


Thank you! And, thanks also, for highlighting our ‘eye candy’ Easter dress a few months ago on your blog….we are still getting hits on our flickr stream from you!


Congratulations on the Viewer’s Choice win!!

Is Your Glass Half-Full, or Half-Empty? ‹ Frances Suzanne


[…] + s; puppet show dress}. We adore it, obviously. We have made two pairs of puppet show shorts {only one blogged about…}, one tunic and two dresses {the last one can be seen here} using this […]


[…] here are some of our favorite things to do in the blogging world: 1. Pattern testing {here, here, and here are a few favorites} for some amazing ladies – being dependent on patterns lends […]


[…] you, one and all, for your daily votes cast for our “Shorts on the Line” sew-along entry…. We were floored and awed by your support the past three days!! Fellow bloggers, flickr […]