Are you ever on the lookout for a pattern with “big bang?” One that gives you so many options and looks, at a reasonable price? One that won’t appear as if you are sewing from the same pattern over and over and over? Well, we found one: Maja Heirlooms Sophie Pattern. No, it’s not a new pattern, nor does it receive a lot of attention via the web (at least that we’ve found). But get this…. when you buy this pattern, you receive a pattern for bloomers, shorts, pants, and a top or bubble (that we’re always a sucker for) – smocked or not. To date, we’ve tried two of these looks, in three different outfits…and are here with the results. 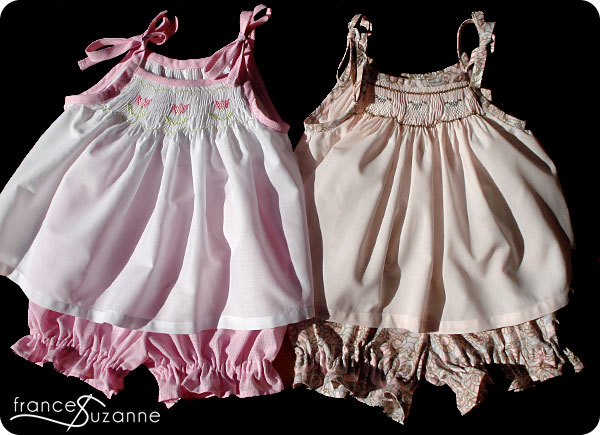 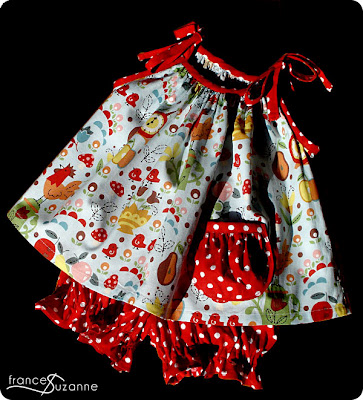 Back in January, we cut two tops to be pleated and smocked. The only problem was: we accidentally cut them in a smaller size than our niece would be wearing in the spring!! No worries though, because we had heard this pattern had a generous fit, so it might still work for her. Of course, since it required picture smocking, and our sewing list was quite lengthy, we placed it near the bottom of it.
We finished our spring / summer list a few weeks ago, and didn’t even attempt to have her try on the finished products. Another niece was on the way, and we opted to call that our first sewing for the newest member of the family….to be worn next spring / summer. 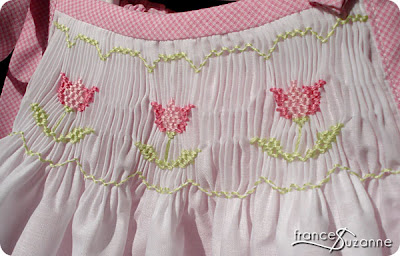 Emily {suzanne} took on her first picture smocking project, and completed the pink tulips on white (Tulip Garden by Ellen McCarn); while Sara {the niece’s mom} began the white sheep on a pink background (Sarah’s Sheep by Creative Keepsakes). Mommy duties to a toddler, pregnancy, and picture smocking weren’t meant to be, so Sara passed off the smocking plate and project back to Emily {suzanne} to complete. *Lesson learned: People smock differently, and should never work on the same project.* After revamping the smocking plate to cover their sewing differences, the sheep were finished… 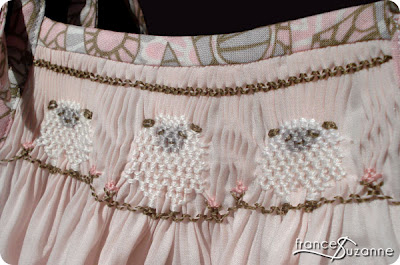 Learning from our mistakes of ‘faulty size cutting’ on the smocked versions, we cut another outfit in the correct size for “the big sis” – entirely for play purposes! We wanted something she could wear and get dirty without her mom stressing over it! Enter: the 2nd look of the Maja Heirloom Sophie pattern attempted. We couldn’t get over how different the outfits looked – just by changing up fabric selection and smocked styling. We did add a pocket on the play version using Oliver + S Puppet Show Shorts pocket pattern. 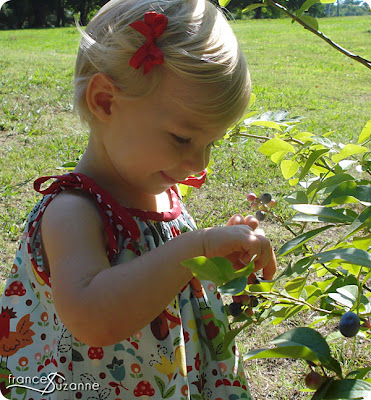 Our niece put this outfit to the durability and play test by blueberry picking eating one morning. We had a few smashed berries along the way, but the majority went straight to the mouth. 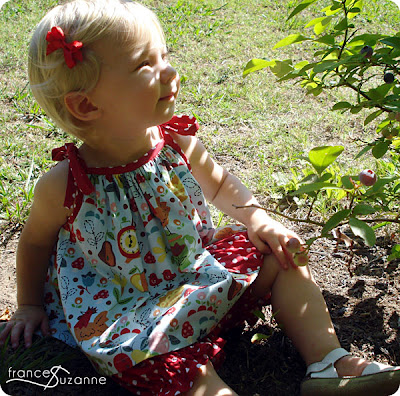 She was such a good sport, she even sat down to pick eat the ‘lazy man’s way.’ It was a rough job, but someone had to do it!

Then, to double check wearability and dirtying up the outfit, she moved on to sidewalk chalk. 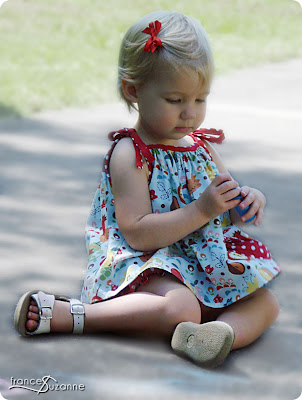 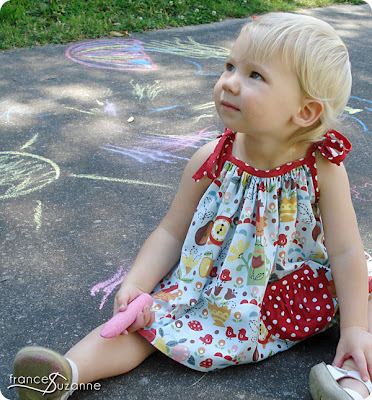 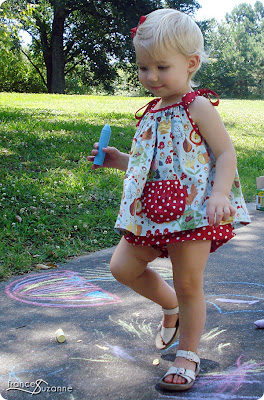 After choosing and working with just one color for some time, she realized she needed to be more aggressive on her testing method….and opted for the vigorous, two-handed approach. 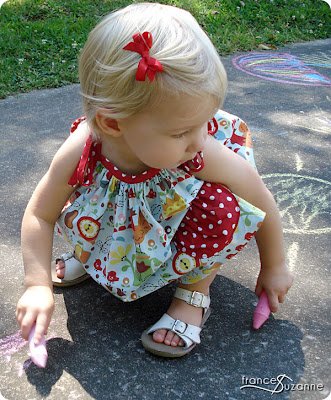 Yep, it’s a winner: withstanding the toddler test! We are eager to try the bubble pattern with our youngest niece, as well as the shorts and pants version on both girls, in the upcoming years! 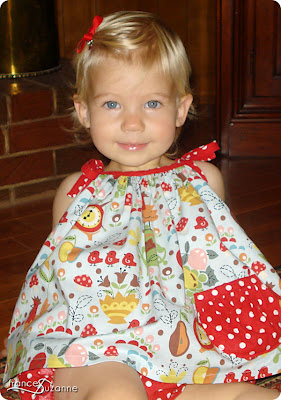 
Very cute. The smocking on the top is fabulous! Well done!


Adorable tops and outfits! I love that style on toddlers.:) I was going through some old clothes of my little girls today and found 2 similar style tops w/ smocking that my mom had made. I think they were from either Sew Beautiful or AS&E. I wish they still fit BK!


Thanks girls! We succombed today and tried the 12 month sheep outfit on the “Big Sis.” It FIT! Guess it was a “generous fit” after all :).


We just followed the Maja Heirloom, Sophie pattern – there are several options within this one pattern that would create completely different looks. Here is a link to purchase the pattern: http://www.thesewingroom.com/shop/Patterns/Majas-Heirlooms/p/Sophie-Pattern-by-Majas-Heirloom-x25974574.htm