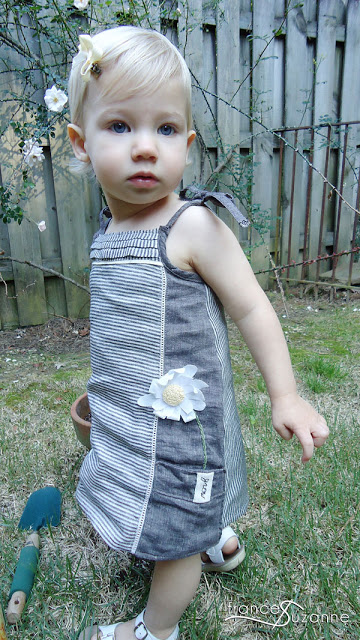 Project Run and Play, Season 4 sew-along taught us many things and the Earth Day / Upcycling Challenge was no exception. Upcycle? What in the world is that??? I had to do a little research…. Wikipedia basically states: Upcycling gives old products more value, not less.

Finding useless, old products in our house was no challenge at all. The challenge lay in converting one of those products into something of more value. First stop: My closet. GO. NO. FURTHER. There it was. Absolutely screaming to be used: THE “Pilgrim Dress.”

Is your curiosity peeked a little? Rewind at least a decade. I was standing in the hallway of my ‘paying job,’ when a student approached me and stated: “Hey, why are you wearing a pilgrim dress today?” Please note that it was nowhere near Thanksgiving, but for some reason this child put two and two together with my dress and the Pilgrims. Hence, THE “Pilgrim Dress” was named. Do not judge….but yes, even after that hint of fashion distress from a child, I continued to leave it hanging in my closet for the next 10+ years or so. But I digress….

Turning to our favorite Oliver + S patterns for inspiration, we opted to do a pattern we had not attempted yet: the Popover Sundress, a free downloadable pattern, along with some Oliver + S Tea Party bloomers. Our first glitch to this plan was the sizing. The smallest size in the Popover Sundress was a size 2, but we really needed an 18 month version. So, we drafted the pattern down {a first for us} to fit our niece. The front and back pattern pieces were cut on the fold, so we took out 1/4 inch from the center fold on both before cutting.  This actually translated to an inch removed (1/2 inch on the front, and 1/2 inch on the back).

Next, we wanted to use the pinstripes in varying directions to create subtle details. We added horizontal tucks to the yoke, but used the vertical stripes of the fabric. A twill ribbon separated the yoke and main portion of the dress, drawing attention to the small tucks and change of pinstripe direction. The main front portion of the dress ran horizontally, while the back portion maintained the vertical stripes from the top yoke.

The dark hem and cream trim was salvaged from the original dress, but turned vertically down the side creating a 90 degree angle with the twill ribbon. We were also able to salvage the back ties to make the shoulder straps. 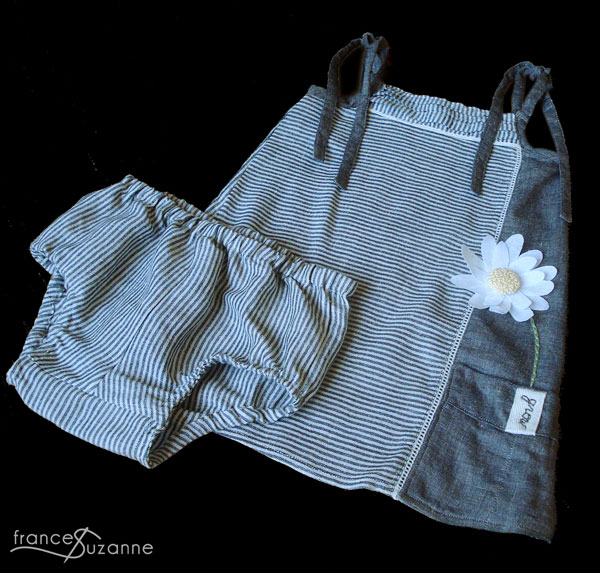 So, we added a pocket…that doubled as a pot….and did a little hand-embroidery ‘grow’ on twill tape. Ashley {frances} worked on the daisy-chain stitch for the stem, while my nemesis project became the flower petals and center. Hundreds of French knots later, I covered a button, creating a flower center. 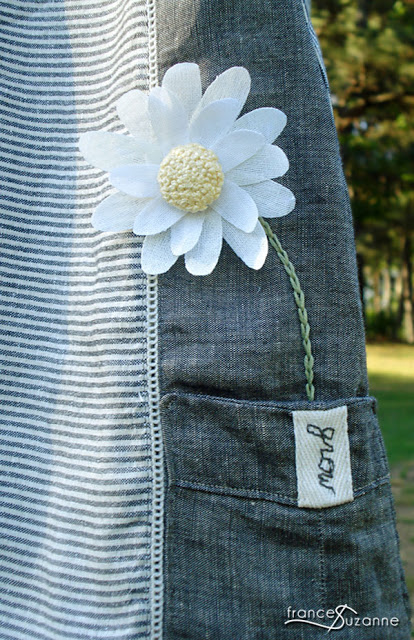 Next, it was time to do our part in saving the planet. Let’s get to planting! Everyone knows you must have potting soil and the proper tools to get the job done… 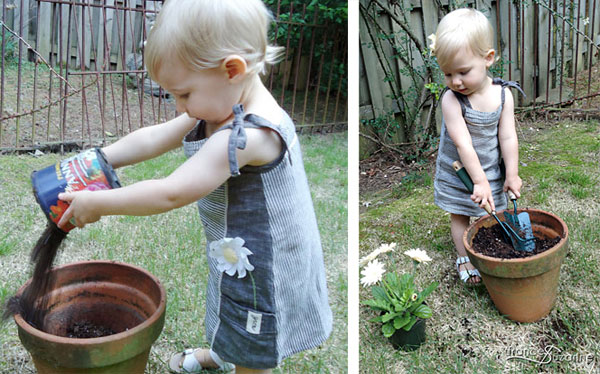 Pour the soil in the pot (and on the ground), then mix-mix-mix….just like a giant salad! And, always keep an eye on your plant to make sure it feels the love….. 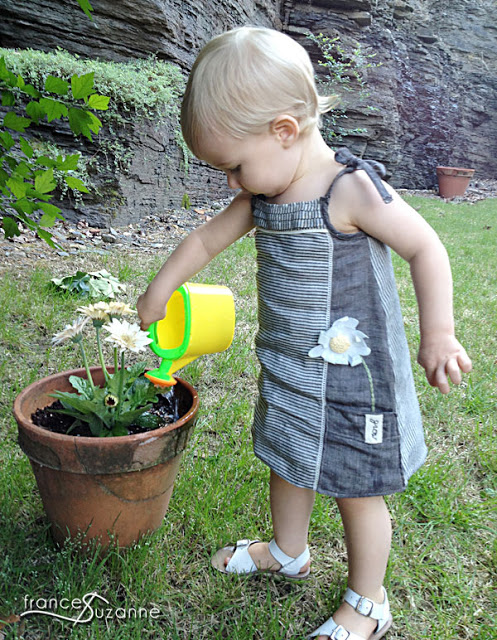 Then, act on that love. It is sure to be pretty thirsty from all the tender loving care received… And, in an effort to not create favoritism in the flower garden, share the abundance of water with all living creatures both great and small! 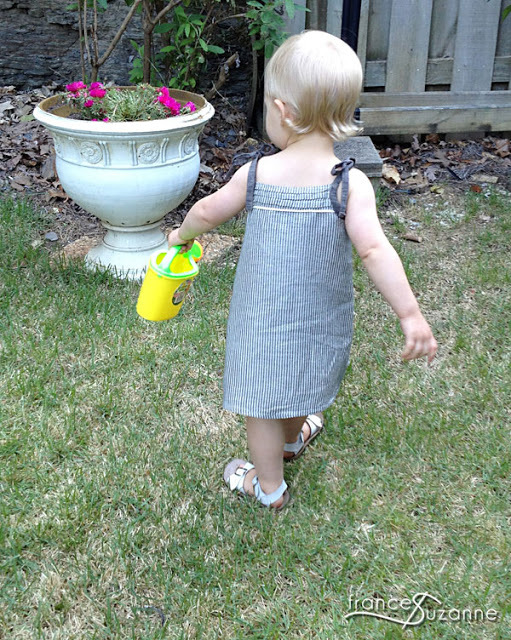 So, Mary, Mary Quite Contrary…How does your garden grow?


Darling, I love your comment about the dress you upcycled – too funny!
http://xoxograndma.blogspot.com/

We Interrupt This Program….. ‹ Frances Suzanne


[…] the presses…..we’ve already done a remix of this pattern in our first Project Run and Play Sew-Along. Of course, it was for ‘upcycle week’, but […]

Love Is In the Air {part I} ‹ Frances Suzanne


[…] do you immediately have a favorite? Well, we always do! During Season 4, it was the “Earth Day Challenge” and then in Season 5, the “White Sheet Challenge” {here and here} took the cake. […]

It Takes Two to Have a “Tea Party” ‹ Frances Suzanne